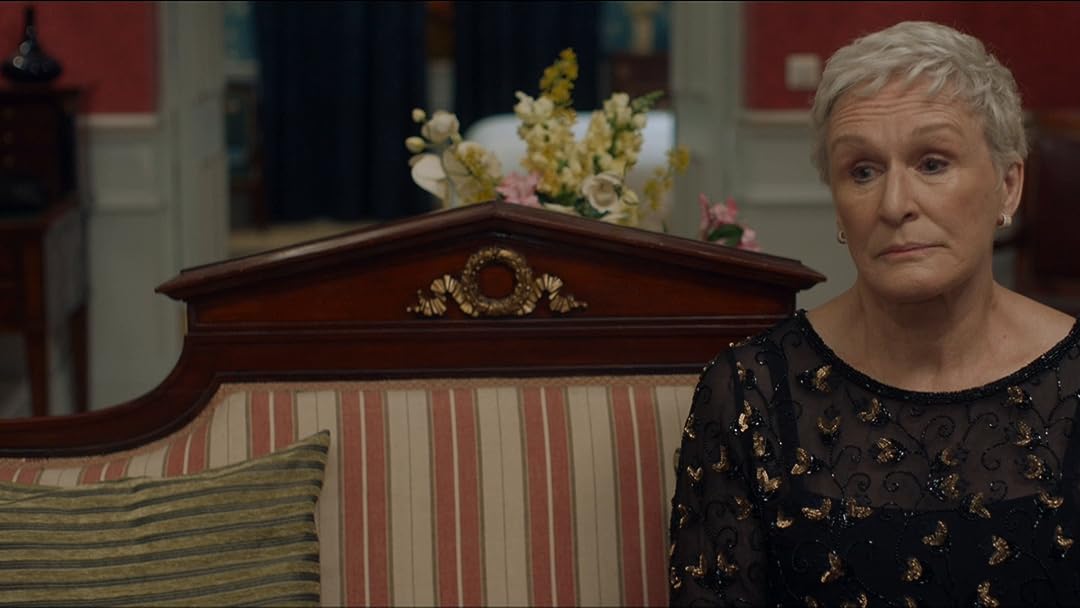 (1,140)
7.21 h 40 min2018
Glenn Close and Jonathan Pryce star in this critically acclaimed film based on the bestselling book by Meg Wolitzer.

Consumer 527Reviewed in the United Kingdom on 25 February 2019
5.0 out of 5 stars
A great story about the complexity of life.
Verified purchase
The film was a tale of a long and happy marriage or was it? It was the story of the women who gave up her own life/ career to look after her husband . The genius ? The writer . Once again it’s the story line that makes the women of my generation think , what if ?
We the older generation of “ The woman behind the man” Before we start feeling sorry for the heroine of the film we realise she has triumphed in her own way. There is a twist in the story that we don’t expect. Beautifully acted by two fine actors. The whole film was a voyeuristic look into a marriage . That’s how it felt.
15 people found this helpful

AntennaReviewed in the United Kingdom on 06 October 2018
4.0 out of 5 stars
Behind every great man
When Joe Castleman receives the early morning call to confirm his award of the Nobel Prize for Literature, his supportive wife Joan seems as delighted as he is. It is soon apparent that he is something of a monster: vain, selfish, inconsiderate and unable to resist the flattering admiration of attractive younger women. Yet, such is her admiration for his talent, Joan seems prepared to tolerate all his shortcomings and devote herself to meeting his needs, even when her loyalties are strained by Joe’s conspicuous of interest in their son David’s efforts as a writer. Could it be that Joe would feel threatened if his son’s talents in the same field were recognised?

When Joe’s aptly named would-be biographer Nathaniel Bone comes searching for cracks in the great man’s perfect marriage, even daring to suggest that perhaps it is not so idyllic, given that Joan long ago sacrificed her own writing ambitions, despite being considered very promising, she sends him packing, adamant that she is fulfilled in her role. Nathaniel is astute in his sense that Joan’s self-effacing dedication is over-intense, and he is doggedly persistent in getting at the truth to feed his own ruthless ambition as a writer.

In a series of flashbacks, which sometimes seem too fragmented, we see the early stages of Joan and Joe’s relationship, as the film gradually works up to the climax in which the truth is revealed. In this well-acted film, which provides a presumably accurate portrayal of the rather grandiose annual ceremony in a wintry Stockholm, I was caught up in the plot and it was not until afterwards that I began to question its plausibility. Overall, this is a poignant study of marital relationships formed a generation ago, of self-delusion and the price of ambition.

IAN DORANReviewed in the United Kingdom on 03 February 2019
3.0 out of 5 stars
Turgid!
Verified purchase
A disappointment after relatively rave reviews. The real, profound background “cheatery” and the implied husband’s infidelity was portrayed as just “flirting” and was just not as dramatically conveyed as it obviously took place. Nor the inner anger and frustrating reaction of the wife - right to the end!
Oscar performances from the two leads? I don’t think so. Good acting, moderate acting, but that’s about it. Just workmanlike, even by names, shouldn’t win Oscars - even if previous roles certainly should have.
Conclusion: slow moving, and really not too convincing.
9 people found this helpful

sextant129Reviewed in the United Kingdom on 05 February 2019
3.0 out of 5 stars
Didn't draw me in.
Verified purchase
The Feminist points were well made but I found the acting over blown and kept thinking 'aren't they acting well' rather than being swept up in the action. Relies a lot on Glen Close's face and expressions. A good film, but not a great one. Now Roma is in a different league all together (but these opinions are very subjective).
10 people found this helpful

Bodil Marie SørensenReviewed in the United Kingdom on 24 March 2019
5.0 out of 5 stars
A film for all husbands and wives, or other significant relationships
Verified purchase
Great acting supports this great story about the married couple who secretly have changed roles. He wants to be a writer, while she is one. He gets all the credits for the books they write, all the followers and hangers-on. The husband lives the life of succesful writer so intensely, that he seems to forget the actual truth. You don't have to be writers, famous or not, to recognize that the problems they have in relation to other people, not forgetting their children, are problems that might exist in other relationships: what is the actual truth about a couple? See the film, and find out for yourself.
5 people found this helpful

Roberto56Reviewed in the United Kingdom on 10 February 2019
1.0 out of 5 stars
Seriously?
Verified purchase
What a bore of a movie! When, at the end, I read that the director was an otherwise unknown Björg Runge, it all made sense (even the distasteful initial scene in bed). What was that supposed to be? Perhaps a distant echo of Bergman's incursions into married couples' intimate life? Shame that Rung is no Bergman and the film is trite and slow. Glenn Close, usually an excellent actress, under Runge's direction often overacts. Jonathan Price - irritating as his character can be - does a better job, I think. As for the supporting cast (especially Karin Franz Körlof, Max Irons, Christian Slater, Harry Lloyd), I am thinking junior high kind of level, really. Quite a waste of time.
5 people found this helpful

G.BeanReviewed in the United Kingdom on 09 May 2019
1.0 out of 5 stars
When good acting meets a terrible script
Verified purchase
This was a fascinatingly AWFUL and dishonest film. Glen Close tried her hardest but her script was atrocious. Why do writers write so badly about writers? If Glen was so brilliant, why was she so seriously obtuse? Are we really going to buy that women in this era could 'never be published' (after a glancing encounter with a drunken Elizabeth McGovern?) I could consider the premise for 'wife' if she stopped writing altogether. But to write in secret for 8 hours per day takes ego and to write for your unfaithful, second-rater-husband's glory is implausible. Has the writer ever heard of Carson Mccullers? Flannery O'Connor? Willa Cather? Tillie Olson? Anne Sexton? Sylvia Plath? And the son..Just did not buy the psychology informing his performance.
2 people found this helpful

D J Jackson: Passionate about Film.Reviewed in the United Kingdom on 09 February 2020
3.0 out of 5 stars
A HANDSOME FILM ~ BUT EMPHATICALLY NOT WHAT IT SAYS ON THE CAN!
Verified purchase
This is a review of the standard Region 2 DVD of this 2017 film, produced by Spirit Entertainment Ltd.

I had been really looking forward to seeing this film, I have a great regard for Glenn Close’s skills as an actress, and Welsh actor Jonathan Pryce is always reliably watchable. It was well-received on release, gaining 4 or 5 stars from all the big UK newspaper film critics (“unmissable” according to ‘The Guardian’). And it garnered Close herself well-deserved OSCAR and BAFTA nominations, and the Golden Globe.

So, in view of all this, I am sad to say that having watched it, we were somewhat underwhelmed. This film does have some good aspects, but some very much less good. I include MINOR SPOILERS, but so do most of the other reviews here!

It is based on a 2003 novel of the same name by American writer Meg Wolitzer. Aspects of the character’s biographies mirror Wolitzer’s own. She studied Creative Writing at University, just like Joan (Close), and also taught it and is Jewish, just like Joseph (Pryce). Interestingly, her mother was also a novelist. Which makes the critical plot premise, of Joan opting not to attempt to be a writer because women were unlikely to succeed, a total nonsense. It has always been a nonsense, provided they were good enough and determined enough.

So here we have it. Joan’s decision is a total McGuffin, an excuse. She won’t try, rather than feeling the effort is useless. Which totally alters the way we need to look at this film: it is not, as the DVD’s plot summary suggests, about a woman 'sacrificing' herself to her husband’s career, but about a woman who has, for well over 30 years, opted to hide behind her husband. And whilst it is suggested that we should feel sympathy for Joan, and consider that she has been unfairly treated by her disgusting, egotistical, demanding, philandering, husband, we need to ask the question ‘is Joan really a victim?’. She went along freely with everything that led her, and us, to this point. The DVD summary calls this ‘a poignant, funny … journey, a celebration of womanhood’. Actually it is neither poignant nor funny, it is desperately sad; and rather than celebrating womanhood, it devalues and undermines it.

The film is a British/Swedish/American co-production, beautifully filmed in Glasgow, Dumfries and Stockholm. It looks handsome, and the picture it paints of the Nobel Prize Foundation and its operation is fascinating ~ although, if it is accurate, also slightly bizarre in places. And the performances by Close, Pryce, and Max Irons as their son David, are excellent. But we do feel slightly conned ~ but perhaps, that is appropriate.
See all reviews
Back to top
Get to Know Us
Make Money with Us
Amazon Payment Methods
Let Us Help You
© 1996-2022, Amazon.com, Inc. or its affiliates