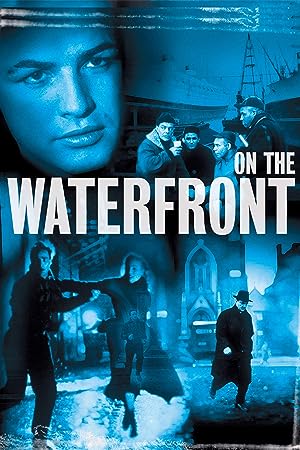 (1,226)
8.11 h 47 min1954X-Ray
Marlon Brando is the longshoreman who finds himself increasingly isolated when he challenges the might and power of the tough new York City dockers' Union. Rod Steiger is his elder brother, torn between loyalty to union and love of family. Lee J. Cobb is the powerful union boss, while Eva Marie Saint is the girl with whom Brando falls in love. Winner of 8 Oscars, including Best Picture, Best Ac..

Rentals include 30 days to start watching this video and 48 hours to finish once started.
Add to
Watchlist

DR P N CLARKEReviewed in the United Kingdom on 12 April 2020
5.0 out of 5 stars
Worth watching for more than just Brando
Verified purchase
On the Waterfront is best known for Marlon Brando’s performance and the “Contender” scene in particular; his work here is widely seen as an exemplar of method acting. But whilst the praise heaped on Brando is deserved, he isn’t the only thing that makes this a great film.
The story is a crime drama about mobster Johnny Friendly’s dockside operations and Father Barry’s quest to bring him to justice, for which he requires Terry Molloy’s testimony. The plot however is Terry’s, as he goes from pigeon keeping dockworker and occasional mob stooge to a man seeking redemption once he falls in love with Edie, whose brother he helped lure to his death. On the Waterfront has been described as a melodrama, and in the sense that it focuses on plot at the expense of character, that is arguably true. Karl Malden’s Father Barry, convincingly acted though he is, remains little more than a priest with a strong sense of morality. Johnny Friendly is a one-dimensional mob boss. And so on. These characters are barely sketched and come alive purely because of the actors. Terry – with his past as a prize fighter, his work for Friendly and his fondness for his pigeons – is the only real exception. But as in any good melodrama, these characters serve the story perfectly, and it’s easy to see why Budd Schulberg won the Academy Award for Best Screenplay.
The story is also not as simple as it seems, or at least it isn’t as predictable as one might expect. It often confounds audience expectations, themselves conditioned by years of crime dramas. For example, Terry does not shoot Friendly (Father Barry talks him out of it), but defeats him by other means, first by testifying against him in court and then by furiously defying him at the docks, taking a beating and still getting back to his feet; the result is that the dockworkers turn on Friendly and throw him into the river. The film’s climax has notoriously been seen as director Eliz Kazan’s justification of his testimony in front of the House Committee on Un-American Activities (Lindsay Anderson described the ending as “fascist”) but it provides a fitting end to the narrative. Indeed the final scene is a triumph, as the camera follows a battered and bloody Terry proudly leading his fellow workers into the warehouse, whilst Barry and Edie look on and the dishevelled Friendly rants impotently.
Marlon Brando is indeed impressive here. He brings his famously naturalistic acting style to the role of Terry and makes it his own. If Brando’s acting seems visible, it’s only because generations of cinema fans have spent years examining what he’s actually doing. That shouldn’t distract us from the fact that he is entirely believable as Terry from his first scene, and he’s electrifying in the scenes that everybody tends to wax lyrical about, including the Contender scene. He’s notable too when Terry is gradually getting to know Edie, showing her his pigeons and almost shyly opening up to her about his past. Later, when he tells Edie that he’d like to help her but can’t, the audience believes him. Terry’s scenes with Edie as they gradually become closer are crucial to the plot – they have to convince us, since they relationship is the catalyst for his decision to betray Friendly, despite the risk he faces in doing so. This is particularly important because Terry is very much an anti-hero in a film from a time when these weren’t common in mainstream Hollywood cinema – he’s basically a small time crook convinced to do the right thing as much as by his attraction to Edie and revenge for his brother’s murder as by Father Barry’s appeals to his conscience.
Whilst Brando is undoubtedly the star, there are excellent performances too from Karl Malden as Father Barry, Eva Marie Saint as Edie Doyle, Lee J. Cobb as Friendly, and Rod Steiger as Charley. Steiger was just as much of a method actor than Brando and arguably more versatile, whilst Malden’s impassioned performance as Father Barry is no less impressive than Brando’s as Terry. All of the bit players convince, the likelihood being that Kazan wouldn’t have accepted anything else; indeed, in search of naturalism, he cast former professional boxers as some of Friendly’s heavies.
Lots of factors make On the Waterfront deserving of its classic status. They include Leonard Bernstein’s economically used, often discordant, deliberately jarring score, which becomes increasingly prominent after the taxi cab scene as the film starts to build to a climax. Then there’s Boris Kaufman’s cinematography, with his use of the low- and high-angle shots that help Kazan to exploit the often claustrophobic locations to maximum effect. It’s a very visual film, with creative camerawork and almost noir-ish lighting. The use of sound is masterful: there’s a fascinating scene in which Terry confesses his part in Joey’s murder to Edie, but we don’t hear it because the dialogue is drowned out by a ship’s horn; the meaning of the scene is conveyed by Brando and Saint’s facial and physical expressions. There are innumerable other small details – the costumes are one, the clothing worn by Friendly and his men emphasising their opulent, crime-funded lifestyle and contrasting with the rough working clothes of the dockworkers, including Terry.
A film as extensively written about and as frequently lauded as On the Waterfront can struggle to live up expectations. It’s not the only Eliza Kazan film worth watching, and it isn’t the only Marlon Brando vehicle worth watching; nevertheless, it is every bit the classic people say it is. Whilst cinema techniques have changed dramatically since 1954, it remains a masterful example of the film-makers art and – perhaps more importantly – it remains a gripping slice of melodrama.

George Thanos AssimakisReviewed in the United Kingdom on 16 April 2022
4.0 out of 5 stars
An interesting film
Verified purchase
This is certainly a film worth watching once in a while. I would not classify it amongst those that one can watch again and again and derive great pleasure from watching it every time, for example classics like "Casablanca". Marlon Brando is excellent, as one would expect from such a great actor. He does have a tendency to delve in "Mafia related stories". The rest of the cast are good. The cinematography is commendable and on the whole I recommend this film to anyone who has not yet watched it.

Robin ManningReviewed in the United Kingdom on 27 August 2014
4.0 out of 5 stars
touch of evil
Verified purchase
There are 3 versions of this film. 1 The original cinema release. 2 The 1986 restored version, which has 20 minutes more than the cinema version.With a sccreen ratio of 1:1.37. 3 The revised 2008 version with a screen ration of 1:1.85. WOULDN'T IT BE WONDREFUL IF THE SELLER WAS TO TELL US WHICH VERSION THEY ARE SELLING! I do not like 'Blind' buying and too many sellers fail to give full information on items like books and films. They seem to have an attitude of, "You got wot yer asked for" Even if it was not what you wanted. If you feel like me then slam it to Amazon and maybe we will get better product information in future.

punterReviewed in the United Kingdom on 09 January 2022
5.0 out of 5 stars
Excellent edition
Verified purchase
The film is a classic. Not much I can add.

I watched every documentary, enjoyed them so much - I will watch them later again.

john kennedyReviewed in the United Kingdom on 20 March 2013
5.0 out of 5 stars
Brando's best performance in a movie that will never lose its relevance!
Verified purchase
This is a movie you must see. Set in the tough docklands of 1950's New York, it tells the story of failed boxer, Terry Molloy (Marlon Brando), whose punchy conscience is managed by his brother, Charlie (Rod Steiger), following the suspicious death of a docker.

Charlie, a sharp-dressed lawyer working for the local mob-controlled Union boss, instructs Terry (an unwitting stool pigeon who became inadvertently responsible for the murder of the docker) to keep his mouth shut and his head down for a while.

The denim-clad and brooding Brando is superb as Terry, who escapes the machinations of the mob heavies and the FBI by retreating to his pigeon loft on the roof of a grimy apartment block.

The key to freeing his troubled conscience is turned by the feisty and beautiful daughter who, along with the help of the local priest, is determined to expose local corruption and those responsible for her father's murder.

The setting is superbly staged and filmed in atmospheric monochrome in the soot-blackened streets and alleys of New York, matched brilliantly by a Leonard Bernstein score and some of the best acting you will ever witness. All this, and the strong suggestion that director, Elia Kazan, made the movie as an apology for exposing friends and colleagues to the McCarthy anti-Communist 'investigations', creates a rare and stunning cinematic experience as relevant now as it was then!
9 people found this helpful

D. AReviewed in the United Kingdom on 04 December 2016
5.0 out of 5 stars
Classica Genius
Verified purchase
A Classic (capital C intended). Great performances all round, a thought provoking plot, some good twists. The film is too well know for those in my age group to go through the plot and it should come as a welcome surprise to younger viewers.
This is how films were made before they relied on lots of explosions and CGI to carry a weak production.
4 people found this helpful

Bernard O'ConnellReviewed in the United Kingdom on 09 April 2021
5.0 out of 5 stars
Wonderful story, brilliantly acted, mean and moody Marlon. Top entertainment.
Verified purchase
A look at life in anti union America, pro mob. Brando, part of the mob, sees his mistakes through love filled eyes. He goes against the mob and suffers but, wins out in the end.
One person found this helpful

ChrisGReviewed in the United Kingdom on 31 May 2010
5.0 out of 5 stars
Marlon Brando at his very finest.
Verified purchase
This is a great film; socially relevant, gritty and well made. However, it would be remiss of any commentary to omit a passing remark or two on the acting performance of Marlon Brando here. I for one having seen only his later works before viewing this film have often been of the view that Brando is vastly overrated. Not so in On the Waterfront. It is the most remarkable acting performance I have ever seen - Brando plays a rough and ready gangster type who is brought to his senses with a tender romance and, well, you will have to see it to believe it. It is quite sensational and is a big part of what makes this film what it is. Not to be missed.
2 people found this helpful
See all reviews
Back to top
Get to Know Us
Make Money with Us
Amazon Payment Methods
Let Us Help You
© 1996-2022, Amazon.com, Inc. or its affiliates