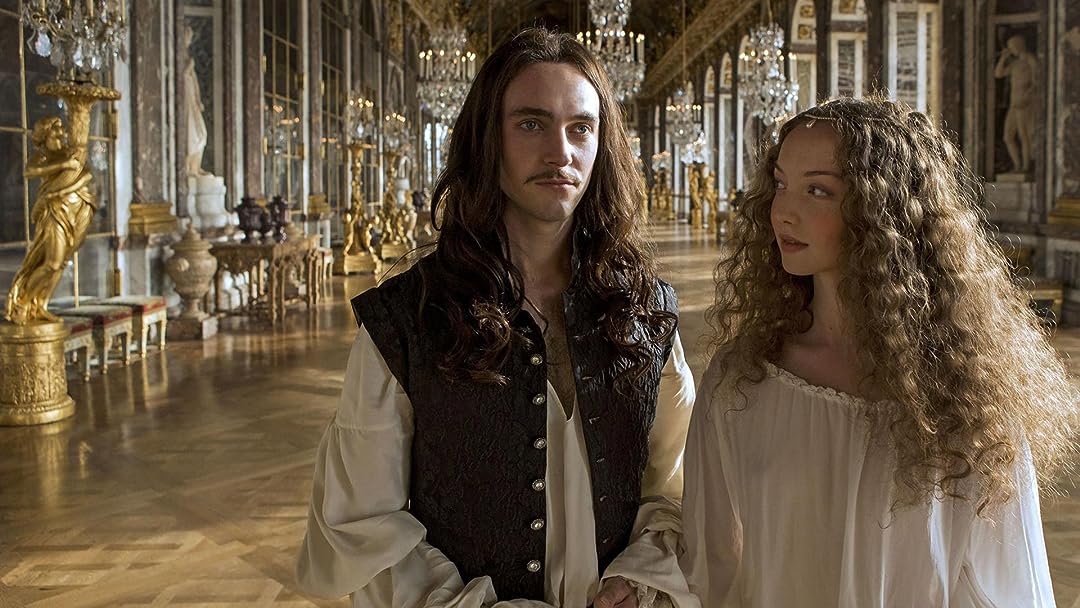 (593)
7.92016
Versailles, 1667. Haunted by the trauma of the Fronde as the nobles of his court begin to rebel against the monarchy, Louis XIV(George Blagden) in his 28th year in a Machiavellian political move decides to make the nobility submit by imposing a definite move of the court from Paris to Versailles, his father's former hunting lodge.

J. L. SievertReviewed in the United Kingdom on 09 August 2019
5.0 out of 5 stars
Rock star good looks
Verified purchase
One of the things about being king is the luxury of being able to bed many or most of the good-looking young women at court. Or so says this drama. King Louis XIV at age 28 has affairs of state to attend to which he nominally does. These mainly relate to roundtable talks about his enemies (foreign governments and armies) and the French peasantry (taxed into exhaustion and submission). But in his downtime, which is considerable, he’s more like a royal gigolo, power expressed largely by libido rather than by the crown at court or on horseback at the head of armies. Of course it doesn’t hurt that Louie is lean, svelte and has rock-star good looks, his hair dangling down in beautiful ringlets well past his shoulders (irresistible sight for the ladies). All the men at court, as a matter of fact, haven’t seen a barber in months or years, their unisex look compounded by powdered cheeks, frilly-sleeved shirts, tight-fitting tights and pointy shoes with golden buckles. Definitions of the alpha male change with the passing seasons and whims of fashion. At this stage in the evolution of Western Civilization (France, 1667) the silverbacks look like they’re from Alice Cooper’s band, circa 1972. If this all sounds like low comedy, it isn’t. In fact, quite the opposite, deadly serious and very political, the only smiles and laughter mainly occurring in bed.

How to make a drama out of all this? Simple. With intrigue, the spice in all the aristocratic machinations and manoeuvring for power and influence. Which means in turn that trust is in short supply. Who to believe when morality itself is so dodgy and flimsy? So this is the downside (or one of many) of being king. The crown sits heavily on the weary royal head, Louie stressed out most of the time when he isn’t naked and purposeful in immediate ambition.

Another thing that fills out the drama: toffs are always wonderful when it comes to idleness, as decadence and hedonism are second nature to them. Here at the palace they loll, simper and frolic when the affairs of state are temporarily suspended, the rock star analogy not so far fetched. Mostly it’s man on woman but sometimes also man to man, this drama aiming to tell it like it was.

But beyond the fantasies and private theatre life goes on, which in this case is not good, the politics of mid-17th century France wretched, the country is in a state of almost continuous warfare with Spain and with itself. The nobility is extremely restless. It despises Louie but kowtows to him as it must, he the Sun God, the man of divine birth. Whether this is actually believed as true or not is beside the point. It’s taken as read and must be adhered to. So the deadly farce goes on.

Louie for his part is content to play the royal game by his own rules. Increasingly he has grown tired of Paris, the main playground of the nobility. This incenses the toffs. Louie has the barmy idea to move the court to Versailles. Yes, Versailles! A nowhere rural berg on the extreme outskirts of the capital, a place for the pathetic poor, not the puffy frocked aristocracy. But the Sun God is nothing if not stubborn. His royal will aims to bring about the change.

In years past the king’s father had a royal hunting lodge built in the forests of Versailles. There the game was and still is fresh and plentiful — stags, wolves, wild boar, birds. Hunting is royal sport. So is riding. Louie hates the filth of Paris. He wants to be a green king in his way. And so Versailles in all its eventual modern splendour will be born, the great gardens, spires and Hall of Mirrors there, not in Paris. This, in other words, is a slap in the face of the aristocracy and they will spend the better part of the drama trying to get even.

To narrate a full season would lead to an extensive review that I have no ambition to undertake. I’ve just tried to fill in the decadent background to the story. But you can be certain that plotting, betrayal, cruelty and misery will ensue. And sex. Plenty of that to ease palatial tensions. And never mind that most of the women are married. What has morality got to do with ecstasy?

I realize this review sounds flippant. But what I really want to do is bring praise to this fine series. At first I was disappointed that it isn’t in French (for the sake of authenticity). No matter. It’s intelligently written, exquisitely acted, and looks beautiful — the gardens, palatial rooms, horses, forests and especially the elegant period clothing. It all feels quite real, so hat’s off to Studio Canal (the French version of ITV) for yet another splendid period production.

Two more seasons after this. I’ll see how much hedonism, decadence, debauchery, mendacity and hypocrisy I can take. The beautiful women may lure me back for more. Probably that was the clever intent of the producers.

Sam3000Reviewed in the United Kingdom on 01 December 2017
5.0 out of 5 stars
Fantastic series, thoroughly enjoyed
Verified purchase
A beautiful, violent, yet entertaining representation of the Court of Louis XIV. Thoroughly enjoyed the characterisation of Louis XIV, Philippe I, Duke of Orléans, Bontemps and Louise de La Valliere. All actors address the inequality of the Court and are incredibly convincing. George Blagden addresses Louis' insecurity as King whilst performing with confidence his affairs with Henriette and Montespan, demonstrating his infatuation with young, beautiful women in his court. I adored the character of Henriette, however whether or not her affair with Louis was historically accurate I have yet to find out.
The sets are beautifully shot, however it is impossible to get a sense of the grandeur of Versailles unless you stand in the Hall of Mirrors itself and this series definitely will inspire you to visit 17th Century France. Versailles Series 1 does not shy away from the graphic too, the sex and violence incorporated into the drama leave you feeling sometimes enchanted but at times bewildered, yet these instances only add to the gripping plot. There are 3 or 4 sub plots within the main plot about Louis, but they are all interlinked and tied together in the most interesting and unexpected way.

I would recommend this series to anyone who loves a thriller and a drama; by no means is this series boring. It has the perfect quantities of romance, conflict, betrayal, drama and history to satisfy all tastes. I would also recommend to students studying history or literature of 17th Century France, as the drama begins in circa 1660, paralleling the Restoration in England at this time. There are many historical references to the English Civil War and the influence of William of Orange in the Netherlands.
11 people found this helpful

Nikiforos V FokasReviewed in the United Kingdom on 14 January 2019
3.0 out of 5 stars
Unrealistic. Smells too sweet.
Verified purchase
Where's the mountains of poop? Versailles in those days, like everywhere else, was nothing more than a giant mound of greasy poop-sculptures, running rivers of wee-wee, and in summer, multitudinous clouds of bluebottle flies. Another close your eyes and pretend its something utopian effort from the tiresome Auntie-knows-best BBC.

Look, I know how to write uplifting reviews, but this isn't one of them. Ok?
10 people found this helpful

markrReviewed in the United Kingdom on 28 February 2022
5.0 out of 5 stars
Superb historic drama
Verified purchase
I absolutely loved this first series which dramatises the early life of Louis XIV of France and his determination to build a palace at Versailles that would reflect the glory of France and of himself. This first series sticks close to the history - there was so much drama that little dramatic licence was required.

We binge watched this series and immediately went on to the next one. The acting is excellent, the characters entirely believable, and the settings astounding.
One person found this helpful

Chris RemingtonReviewed in the United Kingdom on 05 October 2018
5.0 out of 5 stars
Mandatory viewing
Verified purchase
Anyone interested in politics should watch this series and apply it to present day machinations of political clowns in the British Houses of Parliament or any other major historical period of power plays - fiction it might be but the factual base is frightening. Highly recommended.
7 people found this helpful

ruthReviewed in the United Kingdom on 02 September 2017
5.0 out of 5 stars
Brillant
Verified purchase
I missed the first series of Versailles but watched the second and was absolutely hooked so had to purchase series one to find out who was who as I was really interested in all the main characters and the plots and dastardly doings.the acting is brilliant the clothes and settings fantastic period drama at its best.cant wait till series three.
5 people found this helpful

OlympiaReviewed in the United Kingdom on 06 November 2017
5.0 out of 5 stars
Versailles Series One
Verified purchase
Excellent - an engaging history of life at the court of Versailles during the reign of Louis 1V. Louis 1V was responsible for bringing beauty, culture and music to the rest of Europe. He was quite a formidable character along side his brother Philip Duke of Orlean they made a wonderful charasmatic team - although not always in agreement each character is well placed in the storyline. It's hypnotic and beautiful!!
2 people found this helpful

Christopher BrothertonReviewed in the United Kingdom on 19 September 2017
5.0 out of 5 stars
Versaille
Verified purchase
All of the colour, glamour and conflict of Versailles is vividly portrayed in this excellent series. Convincing acting in a magnificent setting.
6 people found this helpful
See all reviews
Back to top
Get to Know Us
Make Money with Us
Amazon Payment Methods
Let Us Help You
© 1996-2022, Amazon.com, Inc. or its affiliates