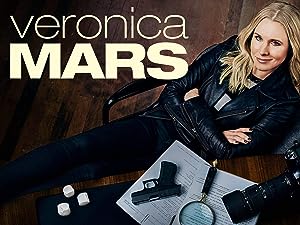 Season 1
(383)
2019NR
Spring breakers are getting murdered in Neptune, thereby decimating the seaside town's tourist industry. After Mars Investigations is hired by the parents of one of the victims to find their son's killer, Veronica is drawn into an eight-episode mystery that pits the enclave's wealthy elites who would like to put an end to the bacchanalia against the working class that relies on the cash influx.

M.B.Reviewed in the United Kingdom on 25 April 2021
3.0 out of 5 stars
What Happened to Veronica Mars?? SPOILER ALERT
Verified purchase
I was looking forward to Season 4 of Veronica Mars. However, the joy of revisiting well-loved characters was short lived. At first, it was hugely satisfying to find Veronica and Logan in a long-term relationship. Logan has a military career and is keeping his anger issues under control with the help of a therapist. So, Logan has moved on with his life and has become a better man for it. Veronica, on the other hand, has become a very judgemental, reckless and selfish PI. Using people when it suits her and proving undeserving of her friends’ loyalty. In this season she treats everyone very badly and takes stupid risks. She carries an air of superiority, shows little support or understanding towards Wallace, Weevil, her father and even less for Logan. She dismisses his marriage proposal, then refuses to attend a couple therapy session that could help them both. Frankly, I don’t understand why they still love her so much. Also there was a missed opportunity to show how close Keith and Logan have become.

The end is very sad. Personally I would have loved seeing the Mars’ office burned down, Keith deciding to retire and for Veronica and Logan to move away from Neptune. Veronica would become an attorney and they would start a family which would give a chance for Logan to become a great father. Maybe the creators of the show should consider forgetting about Veronica and making a show about Logan and his career as an Intelligence Officer.

Still no answer from Amazon yet

LoisReviewed in the United Kingdom on 11 March 2022
4.0 out of 5 stars
Good show, disks worked, box a little damaged
Verified purchase
I love Veronica Mars (even if I'm still recovering from the finale). The disks were in great condition and worked well. The inside of the box was a little damaged but nothing too bad.

KP2010Reviewed in the United Kingdom on 01 March 2020
5.0 out of 5 stars
Just what was needed!
Verified purchase
This series was fabulous especially for those who are fans of the show but would also be great as a stand alone series.

The final two episodes were very heart tugging in many ways and an absolute must for fans!
One person found this helpful

AoifeReviewed in the United Kingdom on 09 February 2020
5.0 out of 5 stars
Love it
Verified purchase
Love it
One person found this helpful

NaomiReviewed in the United Kingdom on 23 October 2019
5.0 out of 5 stars
Not season 1, this is the complete FOURTH season and is misleadingly titled
Otherwise I thought this season was a great return to form, not quite up there with the first and second season perhaps, but certainly better than than the third. The majority of critics too agree that this was a really strong season

It is somewhat of a reboot from the original show, but that is because Veronica isn’t in high school or college any more, and so honestly it makes sense that they want to shift the focus more to the mysteries and go full on noir. I loved seeing Wallace and Dick again, but I’m not sure how much story you can get from a happily married family man who works as a teacher, not unless you try and keep artificially forcing them into the mystery every time which will just end up feeling contrived and cheesy. Like it or not, Rob Thomas isn’t wrong that they can’t keep relying on the same cast of characters for each mystery, season 1 was so strong partly because we could never be entirely sure if Logan, Duncan, or Weevil had been the one to Kill Lily, and season 4 attempts to go back to that feel with the very welcome additions of Kirby Howell-Baptiste and J.K. Simmons leaving your wondering if they could possibly be the ones involved in the bombings. Season 4 is not up there with the strongest mysteries from the show admittedly, it doesn’t ever feel as emotionally resonant as finding out who killed Lily, but there are still some fun twists and red herrings as you try and figure out who is responsible for the bombings
6 people found this helpful

KSReviewed in the United Kingdom on 07 November 2019
1.0 out of 5 stars
Unrecognisable show - complete disappointment.
What a completely disappointing and disrespectful revival of a once-beloved series, which had such a devoted fanbase that they raised $6 million in 2013 to fund a movie, which in turn eventually enabled this revival to happen :(!

In this new season (season 4, NOT season 1), there was so much potential for interesting plotlines and for further development of the characters and their relationships, particularly when it came to Logan and Veronica (whose relationship was a far-cry from perfect this season) and yet none of them were utilised.

- Instead of a tightly-plotted mystery that kept me guessing, it was sloppy and boring and barely held my attention. I guessed who the bomber was from the casting announcement months before the season was even released, but even if I hadn’t guessed, it was pretty obvious right from the beginning of the season.
- Instead of the smart, savvy, one-step-ahead Veronica we came to know and love in the original series, in this season she didn’t even solve anything, she was dumbed down in order to make the mystery work, and she was pretty much the most incompetent detective I’ve ever seen on TV.
- Instead of including the original supporting characters in a meaningful way, they were simply tossed aside as if they never meant anything to the show at all. One of the actors refused to appear in the revival when they found out they would not even be given a storyline.
- Instead of exploring Veronica's mental health and how she seemed to have regressed back to an immature teenager with no explanation, it was barely even acknowledged. In fact, this Veronica was barely even recognisable as the same character. She has always had a tough, no-nonsense exterior, but the reason the fans (and the characters) fell in love with her was because of her gooey, ‘marshmallow’ interior. However, this season, all of the kindness and compassion she possessed for 3 seasons, a movie and 2 books was completely gone… and with no explanation for why this had happened and no real attempt to have her deal with it. As a result, it made her feel out of character and un-relatable to the audience.
- Instead of Veronica and Logan discussing their issues, working on their problems and actually attending couples therapy, we got Veronica belittling Logan, mocking his therapy (despite the fact that she has a psychology degree), considering cheating on him (with creepy Leo, of all people – I thought we got rid of him years ago? His character serves no purpose, so why does he have to keep coming back?), and then suddenly agreeing to a quickie wedding, as if that would solve all their problems (newsflash: it wouldn't). I would have much preferred for either her to agree to attend therapy with him (which is what I assumed the entire point of the storyline was), or for Logan to walk away from the relationship for the sake of his own mental health.
- Instead of taking the route that made the most logical and narrative sense, which was to have Keith either retire or die by the end of the season, thus allowing Veronica to stand on her own as a PI and become the main focus (with Logan by her side), his health struggles were poorly-handled, unrealistically dealt with and deliberately used as a bait-and-switch to make us think he was going to die instead of the character who actually did die.

And then of course, all that potential for Veronica to deal with her previous trauma and for Logan and Veronica to actually sit down and work on their relationship problems, was blown up, literally, just for shock value, in a completely nonsensical way that was filled with plot-holes and inconsistencies. The ending of the season was completely disrespectful, not just to the fans, but to the character and the actor who devoted so much time, energy and love into portraying the character over the last 15 years.

After reading about the 'vision' Rob Thomas has for the show in the future, I have no desire to watch it ever again. This is not the Veronica or the show that I fell in love with, because everything I once loved about her and the show has now been destroyed, with the apparent intention of replacing it with a boring, been-done-before, show that looks like every other show out there, with nothing unique about it. Sorry, it’s a hard pass from me.
6 people found this helpful
See all reviews
Back to top
Get to Know Us
Make Money with Us
Amazon Payment Methods
Let Us Help You
© 1996-2022, Amazon.com, Inc. or its affiliates