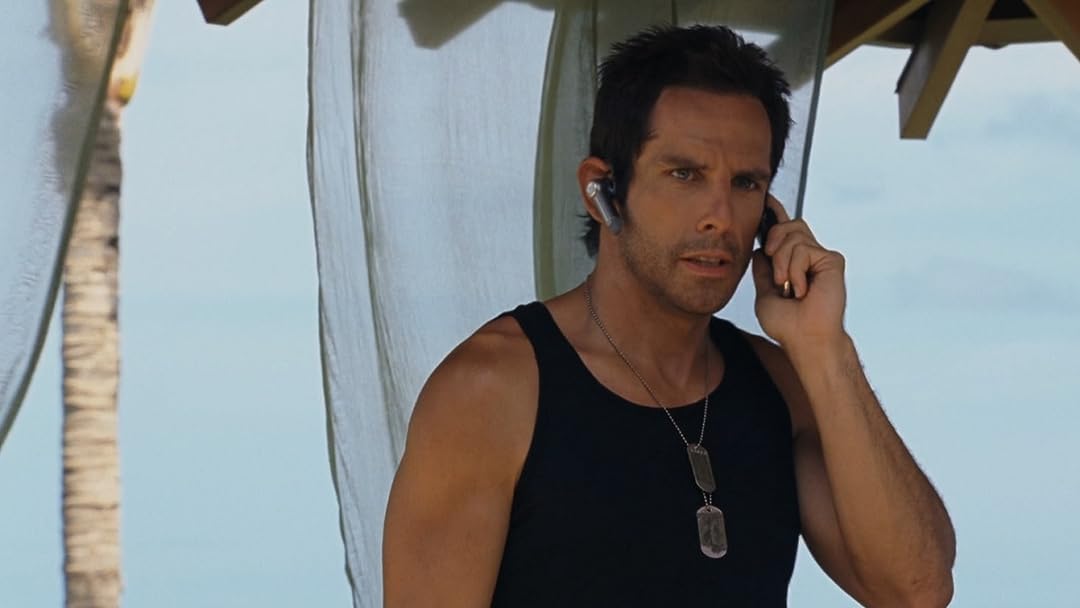 (6,242)
1 h 46 min2008X-Ray
Ben Stiller. Jack Black. Robert Downey, Jr. Comedy fans can start drooling immediately at the thought of these three funnymen joining forces in TROPIC THUNDER. The men star as a trio of actors whose filming experience in southeast Asia gets a little too real as they must become as tough as the characters they play to get out of a crisis.

JordanReviewed in the United Kingdom on 03 August 2020
4.0 out of 5 stars
I'm black and I love this
Verified purchase
I feel I need to say this before dumb cancel culture tries to hate on this film. As a black man this is honestly one of the funniest movies i've ever seen. Robert Downey jr genuinely should have been nominated for an oscar for this role. He's not playing a black man. He's a dude playing a dude disguised as another dude. That's acting.
56 people found this helpful

Peter PanReviewed in the United Kingdom on 02 November 2017
4.0 out of 5 stars
Great film, loved it.
Verified purchase
This film is great. I do not want to start using the word genius, just because someone acts a character in a unique and admittedly brilliant way, but both Tom Cruise's, and in-particular, Robert Downey Jr's performances are inspired. It is worth the price of admission alone just to see Robert Downey Jr bring to life the character of Kirk Lazarus, particularly as Lazarus himself is also playing a character, Staff Sergeant Lincoln Osiris; genius! There, I said it!

Downey Jr is the star of the show here, and the film is worth watching for his performance alone. However, the dialogue, scripting and jokes are also great, refreshing, funny and original. The concepts are hilarious and the film moves along at a satisfying pace. The problem with the film, and it does have one, is that the last third is boring. The film works best, and is at its most hilarious, when conversational set pieces are taking place between the different characters. The final third of the film, is just action action action, which just does not translate in to good comedy. It is a real shame, as this film had the potential to be a masterpiece, I really believe it did. Instead, it is just very very good.

Tom Cruise's dance routine at the end of the film, make it worth going the distance.

D J Jackson: Passionate about Film.Reviewed in the United Kingdom on 05 October 2021
4.0 out of 5 stars
AT 4½ STARS, ALMOST A BRILLIANT FILM….
Verified purchase
This is a review of the excellent 2009 All Region Blu-ray from Paramount Home Entertainment. It comes with a large number of extras.

When we had finished watching this film last night, my husband’s perceptive comment was “Well, that was almost a great film!”. As huge film fans, we were well able to see what Director, Lead Actor and (one of three) Screenwriter(s) Ben Stiller was trying to achieve. We could spot his nods and tributes to a number of well-known movies. We could appreciate that ‘Tropic Thunder’ is very clever, very handsome, and effectively filmed. It was also pretty clear that Stiller’s fellow cast members were having a fantastic time making it. And it IS great fun. But…

It is fair to say that American comedy, both TV and filmic, can appear slightly over-cooked, a little brash and even (say it softly) a bit unsophisticated, to the European palate. At its best, with shows like ‘M*A*S*H’, or films such as ‘Jerry Maguire’(1996) or ‘Planes, Trains and Automobiles’(1987), American comedy is joyful and brilliant, and endlessly watchable. But there is a strand, represented here, and also, for example, by certain Mel Brooks films, where a more manic, less subtle, humour takes over. The result can be very funny, very clever, but somehow, just not QUITE brilliant.

New Yorker Ben Stiller has had a hugely successful career, directing, producing and/or writing several well-known, highly successful films, and franchises including the ‘Meet the Parents’(2000-2010) and ‘Night at the Museum’(2006-2014) trilogies. He clearly has pulling power, with regard to big Hollywood names. This film is absolutely littered with major Stars doing balmy things: a bald and paunchy ‘Dad Dancing’ Tom Cruise(!); Nick Nolte and Matthew McConaughey in quite minor roles; Jack Black as a drug-addicted flatulence-prone fatty; Tobey Maguire ~ blink and you’ll miss him. And that’s just for starters.

Certainly, the film references are many and very good. Besides myriad Vietnam War films, particularly Willem Defoe’s character in ‘Platoon’(1986), and the pyrotechnics of ‘Apocalypse Now’(1979), there are also references to Eddie Murphy spoofs, ‘Brokeback Mountain’(2005); possibly even ‘Predator’(1987) with characters being held hostage in hostile jungle camps.

There are also a couple of rather controversial aspects: Stiller’s character’s previous film ‘Simple Jack’, about a disabled farm boy caused considerable criticism amongst advocates of the disabled community. Also, Robert Downey Junior appears in highly politically-charged ‘Blackface’ guise for most of the film, complete with a faux African-American accent. Perhaps surprisingly, this proved less problematic than Stiller’s role as Jack.

The film IS often funny, the plot is bonkers but good, much of ‘Tropic Thunder’ works well. It just seems that in places, the cast are slightly running amok. It could all do with being tightened up a bit. The feeling that everyone is having a ball on set, wins out over the overall effectiveness of the film. So, in the end, this is 4½ Stars, not 5.

S. ColemanReviewed in the United Kingdom on 26 October 2020
5.0 out of 5 stars
Very, very funny...
Verified purchase
Worth it for Tom Cruise's hilarious performance alone! Thoroughly enjoyed this brilliantly silly, very funny film... Lots and lots of belly laughs, great cast and fantastic comedy performances from 'serious' stars you wouldn't necessarily expect to do a comedy role. Really enjoyed it.
3 people found this helpful

JT24Reviewed in the United Kingdom on 05 July 2017
5.0 out of 5 stars
A Great Piece of Mainstream Cinema.
Verified purchase
A big mainstream comedy that is actually very clever and subversive in it's genre.

The performances are brilliant with the actors playing actors acting. The concept of the film is hilarious in itself and the writing of Justin Theroux and Ben Stiller really make it work. The way the film parodies the War film sub-genre of Vietnam is clever and subtle enough to not feel contrived. Downey Jr is naturally the standout as his character is so well written. The slapstick comedy blends brilliantly with the hardcore action sequences making Tropic Thunder a standout in the comedy genre. Tropic Thunder is one of the best flms made about films. Not quite Sunset Boulevard in that sense, but you get the point!
7 people found this helpful

Rupert GarciaReviewed in the United Kingdom on 16 March 2021
3.0 out of 5 stars
As a Critique of Hollywood ...
Verified purchase
It was pretty dumb, but what do you expect from a movie like this? Some dudes playing dudes playing other dudes? Very funny though, with some slapstick action and a few decidedly non-PC moments, which raises the question - who really cares about all that stuff anyway, apart from C-list academics and bored students on various useless sociology courses.
Worth watching if you're in the mood, or you've been drinking and can't seem to focus on a storyline, which is OK, because there really isn't one.

DebbieReviewed in the United Kingdom on 26 March 2021
5.0 out of 5 stars
I forgot how funny this is!
Verified purchase
This movie is hilarious with an amazing cast from a time when hollywood wasn't pushing politics in every single film & actors were not terrified of offending anyone! Bring back comedy like this where everyone gets a send up equally instead of bowing to cancel culture & woke twitter mobs!
2 people found this helpful

ThespionicReviewed in the United Kingdom on 09 April 2015
3.0 out of 5 stars
Very Average at Best
Verified purchase
Well we certainly had some stars turn out for this one? Stiller was typically Stiller – all rather obvious now I’m afraid, and Black was Black – already over exposed and now IMHO not funny anymore! He added nothing to this film.
Downey Junior would have been good if you could have made out what he was saying half of the time? Tom Cruise was a hoot, and I didn’t even realise that it was him under all of that make up and padding!
There were some seriously funny moments, but too many others that relied on tired old traits of comedy, simple gurning and startled looks into the camera. I lost interest a long way before the end of the film. It may seem a strange thing to say but I found a lot of the comedy very tiresome, over used, unfunny, and frankly better aimed at a juvenile audience?
I watched the Bluray version which is very sharp and pleasing on the eye.
I was going to give this two stars, but on reflection, it was well filmed with some nice effects and moments, though some of the plot was very weak.
It was nice to see so many stars hamming it up!
The film got back its outlay, and scored a very average 7/10 on both Rotten Tomatoes and IMDb, which essentially says it all.
2 people found this helpful
See all reviews
Back to top
Get to Know Us
Make Money with Us
Amazon Payment Methods
Let Us Help You
© 1996-2022, Amazon.com, Inc. or its affiliates