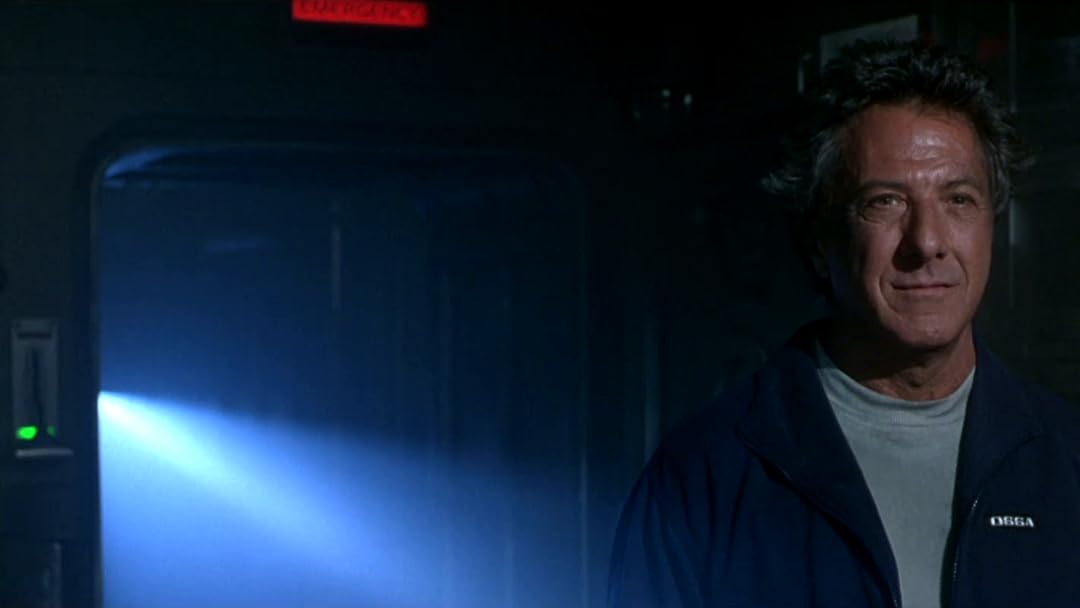 (1,121)
6.12 h 8 min1998X-Ray
Based on the bestselling novel by Michael Crichton, Sphere tells the story of a group of scientists who descend to the darkest depths of the Pacific Ocean to explore an ancient spacecraft. But they soon come into contact with a murderous alien intelligence hidden in the ship's mysterious cargo.

DVDERReviewed in the United Kingdom on 08 December 2019
4.0 out of 5 stars
Not what it seems, but all the better for it...
Verified purchase
Warning: some minor plot spoilers below.

Ostensibly a Sci-Fi movie about the discovery of an unknown spacecraft which crashed in the sea 288 years ago, this movie has an interesting plot that is really an allegory for something entirely different, and has a fantastic cast that delivers this extremely well. The downside to this? If you're looking for a splash, crash, bang Alien encounter, you may be disappointed. Like 2001 or even 2010, the purpose of this story is not to titillate or entertain, with outstanding special effects, but to provoke thought.

Set in the present day, it sets the scene of the aforementioned discovery and the team that is brought together to be the First Contact team for what a shady US Government agency believes might be the first encounter with an alien society. For the observant, however, it becomes clear that there is more to this story than meets the eye. The author of the "Goodman Report" (Hoffman) which forms the basis of a specially commissioned protocol for First Contact is a psychologist (why he was commissioned by the George HW Bush administration is never clarified); the team he recommends are not only credible specialists, but also all ex-patients of his (an Astrophysicist, a Biologist, and a Mathematician, as well as himself). Thus is set the scene for a psychological drama that more ponders the darker sides of the human condition than any alien contact.

To say more at this point would be to irretrievably spoil the plot, but suffice to say we have what is basically a ghost story plotline where the ghosts are those of past relationships. True, there are moments of terror and some (for the time) splendid special effects. But what carries this movie is the breadth of acting talent on display. Sharon Stone, I believe fresh from her triumph in Scorsese's "Casino" is the standout star here, channelling the credible and breathtaking character of an otherwise strong woman laid low by her fears and vulnerabilities. Also standout is the then-relatively new Liev Schreiber: while not my favourite actor, he turns in authentic and squirrely performance as the likely Aspergers-afflicted astrophysicist. Naturally, Hoffman turns in his normal workman-like performance and Jackson too is credible. The small cast is filled out by creditable performances not only from Peter Coyote, but very tempered and professional cameos from no less than Queen Latiffah and Huey Lewis (of the News fame).

The result is a story that poses the question not so much (as would be obvious to most people) as what could we do with unlimited power to imagine and create, but moreover, what would our human fears and insecurities drive us to do with such unlimited power. This is an interesting reflection not only on the personal (as each character takes revenge on their compatriots for past misdemeanours) but also for the dangers of the power of advanced technology as well. At the end of the movie, the most poignant moment is when Hoffman begins to implore them not to relinquish their power, but then, reflecting on the self-inflicted tragedy they have just survived, realises that they are "not ready" for such power.

Other downsides? Well this movie is from the 20th century, so less-enlightened viewers might not rate the relatively slow pace, relatively primitive CGI and lack of crash-bang entertainment. There are also some horrendous scientific bloopers (the physicist incorrectly describes why Helium is used in deep sea dives, basing this on yet another blooper - that Oxygen is in the Halide family of elements). Additionally, this movie does feel a little half-finished: one suspects there was more to do to create the bigger stage for what eventually plays out like a small-cast theatre play. Even Hoffman himself felt there were "issues" that needed to be resolved. Additionally, from a directorial point of view, this movie does not seem to decide on which route it should take: deep and brooding psychological/existential treatise, or action movie? As a result, it seems unsure of itself.

But for the Zoomer generation, brought up not just on outstanding special effects, but also on great storytelling, this is a story worth watching. For me, it may miss the perfect five stars I give "2001", but despite all its failings, it is a truly wonderful and thought-provoking story. Recommended.

C. NaismithReviewed in the United Kingdom on 04 December 2019
2.0 out of 5 stars
Sphere doesn't know what it's supposed to be
Verified purchase
The promise is there with a pretty strong cast, an award winning writer in the form of the late Michael Crichton and interesting sets and underwater cinematography. Unfortunately the script falls flat on its face. I get the feeling that the cast took their parts very seriously and there's some genuine humour to prevent it from becoming mundane but they just didn't have enough to work with so the story ends up running out of steam. If the script wasn't so lacking I feel that it could have been saved in the edit because the premise of the film is interesting, just completely under utilized. It's a C- offering that could have been B- or even B+.
2 people found this helpful

LeeReviewed in the United Kingdom on 21 July 2020
2.0 out of 5 stars
Bloody Awful!
Verified purchase
Apart from the all star cast and a young Queen Latifah, this film sucks. I believe the only reason it got some light on Prime was because it was about a alien craft crash retrieval which is all the buzz at the moment in the UFO world as there is some hype that the New York Times might be about to spill the beans on this subject. Other than the cast i can not think about one positive thing to say. Oh well. Sorry.
One person found this helpful

Jonathan WardReviewed in the United Kingdom on 03 September 2019
4.0 out of 5 stars
The Heart of Darkness
Verified purchase
Sphere is an entertaining, thought provoking, interesting sci-fi movie albeit with less special effects than some movies in the genre, preferring to focus more on acting, character development and plot. It's worth a look especially if you're a fan of Dustin Hoffman or Sharon Stone.
2 people found this helpful

StarpupReviewed in the United Kingdom on 09 January 2015
5.0 out of 5 stars
Great sci-fi. Really excellent performances by Hoffman
Verified purchase
Can't say too much without spoiling the story. Great sci-fi. Really excellent performances by Hoffman, Stone and Jackson. Thought provoking, if you're into 'what if...?' The original Solaris did it better, but I don't think there are many, even hardened film buffs, who are up to 4 hours of a 70's foreign film with a record number of silent moody moments (I did it thinking something was about to happen...does that show perseverance or naivety? Sphere covers the concept well and keeps you wondering what's going on. Ending is up for discussion if you pack in a few mates who like that kind of entertainment.
2 people found this helpful

Michael AshtonReviewed in the United Kingdom on 26 January 2018
3.0 out of 5 stars
Less inside than you'd think
Verified purchase
This film flatters to deceive, unfortunately. The first half is a pretty good SF story, albeit with some fairly goofy US trumpet-blowing. Unfortunately the plot degenerates into a fairly humdrum "Monster Movie" scenario, and it ultimately misses its target by a wide margin. Some good performances from the actors, but then, you'd expect it.
2 people found this helpful

McGregorReviewed in the United Kingdom on 30 July 2020
1.0 out of 5 stars
Rubbish!
Verified purchase
Sharon's acting hasn't improved.,but she still looks good for her age. Did Micheal Crichton really write this, I will give the book a big miss, I'm really surprised Hoffman was in this: he is the only reason I bought the movie!!
See all reviews
Back to top
Get to Know Us
Make Money with Us
Amazon Payment Methods
Let Us Help You
© 1996-2022, Amazon.com, Inc. or its affiliates