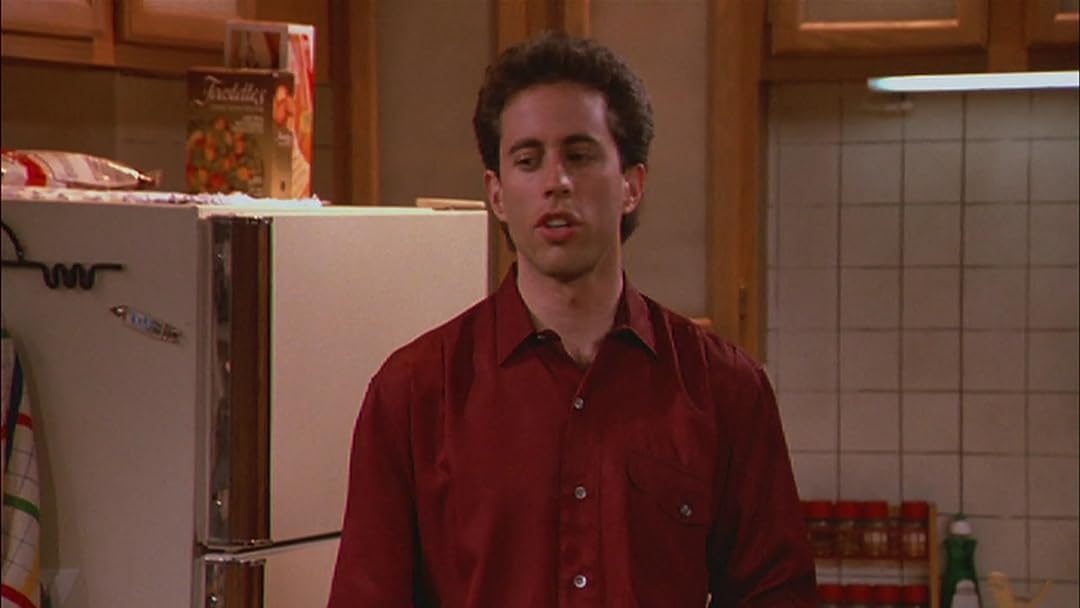 Alastair MajuryReviewed in the United Kingdom on 17 July 2017
5.0 out of 5 stars
Seinfeld is still Gold
Verified purchase
One of the most popular sitcoms of all time, "Seinfeld" probably would not have lasted had it aired today. However, NBC was able to see a small cult audience gathering around the show when the pilot first aired in 1989, and although the first couple of seasons didn't exactly light up the ratings, or were they the best moments of the series, the sitcom eventually began to gather some serious steam.

In the characters of George, Jerry, Elaine, and even Kramer, we were able to let fly with all the things that weren't necessarily acceptable in everyday life. They were our avatars, the ones who were "just saying what we're all thinking." Granted, they took it farther than any of us ever would, even if given the space to cut loose, but that's what made it so funny. Like a fun-house mirror, it took all of our private anxieties and blew them up to a gargantuan public spectacle.

Basically the show centers on neurotic New York stand-up comedian Jerry Seinfeld, his old girlfriend who he is still friends with Elaine Benes (Julia Louis-Dreyfus), his eccentric neighbour with outlandish ideas and wacky appearance with his upright hair and loud clothing "Cosmo" Kramer (Michael Richards), and his loyal best friend the balding, self-loathing, miserly, dishonest, petty and insecure George Constanza (Jason Alexander). Most of the episodes center around Jerry's apartment as well as many other places out and about New York City.

"Seinfeld," in most episodes, consists of four stories that are interrelated. The four cast members live their own lives and get themselves in all kinds of messes just like real people. They are so close as friends that they have each other to fall back own when the slings and arrows of outrageous fortune get the best of them. It is quite understandable why none of the four has ever married. Even though in their 30's, Seinfeld and George are still tied to their parents. Both are also bundles of neuroses, particularly George.

At least Seinfeld has his looks and job as a stand up comic to keep his ego fed. George is fat, bald, basically a loser, going from job to job, living with his parents much of the time. Elaine is attractive, has a decent job, yet is somewhat of a floozy, although she won't admit it to herself. She is also so self-centered that she is unable to give much in a relationship. Kramer, well, who could live with him ? The only friend who can tolerate him for long is Newman, that nobody likes besides Kramer.

The humour throughout the series is cleverly done. It is not over the top nor is it outrageous, yet it relates to everyday events and the writers even incorporated their own experiences and brought it to life in the show. There will never be another show like "Seinfeld" and all four actors will always be remembered for "Seinfeld" no matter what happens throughout their careers. For a show about nothing, it certainly has reaped its benefits for everyone.

MEReviewed in the United Kingdom on 10 May 2019
1.0 out of 5 stars
CANCEL
Verified purchase
I DID NOT WANT TOMAKE THIS RUBBISH ORDER AND TRIED SEVERAL TIMES TO CANCEL IT . SYSTEM NOT GIVING ME WAY TO DO SO
7 people found this helpful

Parzival1706Reviewed in the United Kingdom on 30 April 2020
3.0 out of 5 stars
Mehhh
Verified purchase
I just don't get this show. I know how good it is touted to be, but just.... its boring!
3 people found this helpful

Mrs G E PuckettReviewed in the United Kingdom on 17 March 2021
5.0 out of 5 stars
Still relevant, even more so
Verified purchase
No one does it better than Seinfeld. Neurosis elevated as art.

Pavol Krascenic Reviewed in the United Kingdom on 02 May 2019
5.0 out of 5 stars
Shame you have to pay not watching it
Verified purchase
Most funny sitcom of all times
One person found this helpful

StewReviewed in the United Kingdom on 05 February 2019
1.0 out of 5 stars
Now costs extra
What the hell? You’ve started charging for this now? All seasons? What is wrong with you? Until a few days ago this was all included with Prime. What? You don’t make enough money? I pay for Prime. I pay for Amazon Music. I buy tons of stuff off your website. The one thing - the one little bit of ‘oh, that’s cool, they haven’t chosen to steal a buck for this show, this company is still redeemable’ - is gone. Gone. This might be the straw that broke the camel’s back. I think I’m done.
31 people found this helpful

AndreaReviewed in the United Kingdom on 10 January 2017
5.0 out of 5 stars
Slapp bass!
Verified purchase
It's bloody Seinfeld! 5 stars all around! Although, I'm finding it hard to binge watch. With no TV adverts during and between episodes, there's A LOT of slap bass happening! "bowwww-bow-bow-bow-bow-bow-bow!".
11 people found this helpful