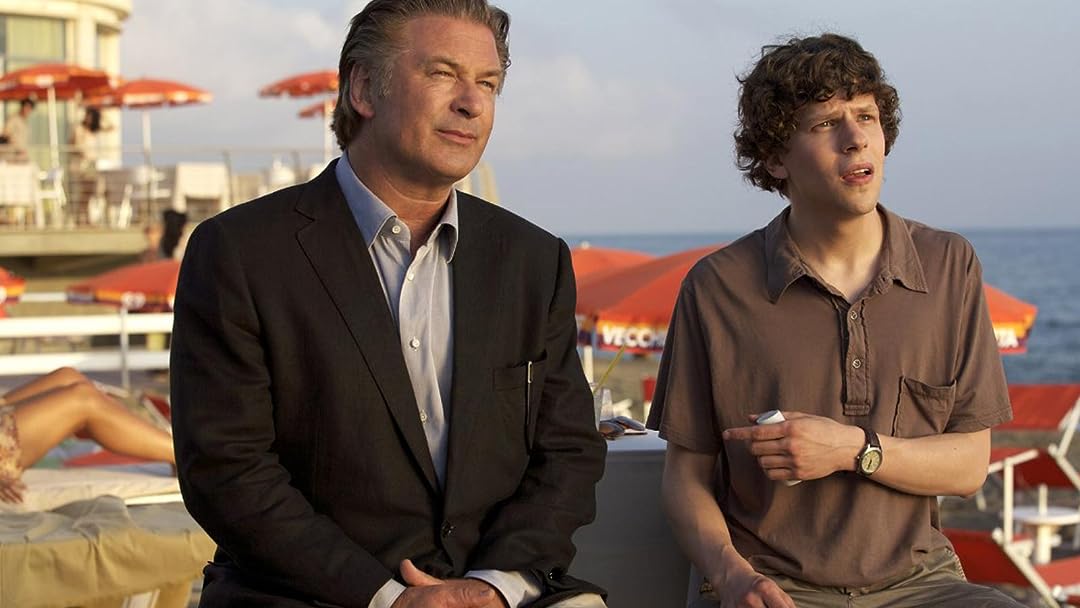 To Rome with Love

PhiloctetesReviewed in the United Kingdom on 06 April 2020
4.0 out of 5 stars
We try to hire as many loco people as possible.
Verified purchase
Ok, that's a misquote, the word was local, but there's no denying the joyous madness that is To Rome With Love (2012). This is a film where everyone arriving in the city gets a little crazed, and given what you probably sense about Rome, whether you've ever been there or not, seems hardly surprising.

What is surprising is how the postcard title of the movie, originally entitled The Bop Decameron, totally belies the ludicrous hilarity of this movie. This is way past Midnight in Paris's nocturnal time travelling, or the summer flings of Vicky Cristina Barcelona. This is kind of like both those movies combined, and the repeated use of Woody's term 'Ozymandias Melancholia' drags us back to his masterful Stardust Memories (1980), with which this film also has themes in common.

But be careful, for like Midnight...' it doesn't start promisingly, with the traffic cop introducing the characters, none of whom prove very endearing in the first ten minutes. My advice, stick with it, because To Rome With Love turns into quite the carnival, with multiple storylines and time zones and existential metamorphoses. I'd also say there are multiple Woodys in this movie, not just Woody himself, but Jesse's character, the young husband, Pisanello the shmuck, all are Woody clown characters.

I'm not gonna tell you anymore, except to say it's romantic, surreal, full of homages to Italian cinema and Woody's own oeuvre, and in the best possible way, gorgeous to look at. Truly. And now we're in a time period of international viral lockdown, what better time to pick up a movie loosely inspired by Bocaccio's Decameron, eh?!

Very funny and nutty. Loved it.

BiggaJReviewed in the United Kingdom on 31 January 2019
4.0 out of 5 stars
Typical Woody Allen
Verified purchase
If you like and appreciate Woody Allen comedy then this is a good watch set in a beautiful city with a good cast given good script ... Woody Allen obviously gives himself the lions share of the quips.

If you like a some romance, comedy, good actors and great back drop this is an easy watch.
3 people found this helpful

Lonely RussianReviewed in the United Kingdom on 05 April 2019
4.0 out of 5 stars
Lovely, silly, Italian..
Verified purchase
At first, when I realised my mistake - this one is an Italian release with no translation of Italian dialogue which takes about a third of time - I was annoyed... until I realised that, actually it adds to the movie's charm and "authenticity".

Antonia Tejeda BarrosReviewed in the United Kingdom on 31 August 2018
5.0 out of 5 stars
another Woody Allen gem. Packed with jokes, beautiful long shots, and great writing. 10/10
Verified purchase
Jerry (Woody Allen): “Don’t analyze me, Phyllis, okay? You know, many have tried and all have failed. My brain doesn’t fit the usual id-ego-superego model!”

Phyllis (Judy Davis): “No, you have the only brain with three ids.”

Yesterday I watched with my kids To Rome With Love, by the genius Woody Allen, for the 100th time. Such a great movie! Hilarious, amusing, and cool: full of jokes and funny moments.

Woody manages (as always) to tell his story with humour, deep, jokes and more. This time he tells 4 stories, all amusing and imaginative.

I love that Woody is in the movie, accompanied by the great and beautiful Judy Davis. When they first appear, in the plane, we already get Woody’s philosophical humour. He says to Judy: “I can’t unclench when there’s turbulence. You know, I am an atheist.”

My favorite character is Leopoldo Pisanello, played brilliantly by the hilarious Roberto Benigni. We laugh every second that he’s in the movie. The Italian actors Alessandro Tiberi (Antonio, Milly’s husband), Alessandra Mastronardi (Milly), Antonio Albanese (the famous actor Luca Salta), and Riccardo Scamarcio (the hotel burglar) are all hilarious. The legendary Ornella Muti appears 10 seconds in the film.

Fabio Armiliato is a very well-known opera tenor singer who plays the role of Giancarlo beautifully and sings amazing (in the shower). Armiliato has had leading roles and sung in the most prestigious opera houses of the world (Metropolitan Opera House of New York, La Scala in Milan, and L’Opéra de Paris).

Alec Baldwin is great as always. Jesse Eisenberg plays to the perfection the role of a shy and confused young man. Penélope Cruz is wonderful and beautiful as always. Alison Pill (Hayley)’s performance is very fresh, and Flavio Parenti (who is Michelangelo, Hayley’s fiancé) is great in his role as an angry ultra left-wing young man. Monica Nappo plays amazingly Pisanello’s humble wife.

Since Page and Gerwig opportunistically stabbed Woody right after the world saw Dylan Farrow’s crocodile’s tears in January 2018 (she’s been trying to destroy Woody with her prefabricated story for ages), I can’t stand watching them onscreen. Their treason, hypocrisy and opportunism will be always remembered (unlike their acting). Nevertheless, the lines that Woody wrote for them are really good.

The cinematography of the film is really beautiful. Cinematographer Darius Khondji (born in Iran but majored in Film at New York University) worked previously with Woody in Anything Else (2003) and Midnight in Paris (2011) and would go on working with Woody in two other films: Magic in the Moonlight (2014) and the masterpiece Irrational Man (2015). Other great works of Khondji include Delicatessen (1991), La cité des enfants perdus (1995), Alien: Resurrection (1997), and Amour (2012). He also worked as a cinematographer in many videos of Madonna.

To Rome With Love is rated in IMDB “restricted”. I really don’t know why. Maybe because Penélope plays a prostitute? Well, as we all know in the States it’s OK to watch movies with thousands of bombs, guns, and killers, but love and sex are more dangerous and always restricted. Funny country…

To Rome With Love is another Woody Allen gem. A fresh and funny film, packed with jokes, beautiful long shots, great writing and a wonderful cast. 10/10

The worst: that Page and Gerwig contaminate the film (two ungrateful hypocrites who opportunistically stabbed Woody) .

The best: all the funny moments, Woody, the great Judy Davis, Roberto Benigni, and the cinematography.

We love you, Woody!
2 people found this helpful

ClaudetteReviewed in the United Kingdom on 31 October 2020
4.0 out of 5 stars
Light and entertaining
Verified purchase
The right film to forget we are doomed with a virus. When he likes a city, Woody Allen films it with love. The characters are sometimes a bit 'cliché' but clichés come from a recurent thruth. There is no plot but you don't see the time flying and at the end I felt disappointed because I thought I've just seen the beginning. Just enjoy it, not with beer and crisps but with a coffee and nice chocolates.... or something refined...
One person found this helpful

Mr. G. LawrenceReviewed in the United Kingdom on 29 October 2020
3.0 out of 5 stars
Not one of Woody's best
Verified purchase
Not a great movie, I'm afraid. The setting is wonderful - Rome is just marvellous to look at - but although I'm a huge Woody Allen fan, and love many of his movies, I found the storylines and characters in this one rather feeble. I judge a DVD by whether I keep it to watch again or it goes to a charity shop. This one is on the pile for the charity shop.
One person found this helpful

A W MARLERReviewed in the United Kingdom on 04 December 2021
4.0 out of 5 stars
Really enjoyable romp including the beautiful Alessandra Mastronardi
Verified purchase
Great Woody Allen film not up with Midnight in Paris but good easywatching. I love the way the various characters in his later films often seem to be physically resembling Woody inself whilst speaking his dialogue. For my the exceptionally lovely Alessandra Mastronardi stole the show... never heard of her before but she was wonderful.

Emily HeathReviewed in the United Kingdom on 22 February 2022
5.0 out of 5 stars
Glorious Rome combined with Allen's wit
Verified purchase
This film is worth it for the gorgeous cinematography of Rome, but it's also full of the sarcastic wit that WoodyAllen does best, with an extra helping from Alec Baldwin. That said, every acting performance is polished and the backdrop of Rome just makes you want to see the Eternal City for yourself.
See all reviews
Back to top
Get to Know Us
Make Money with Us
Amazon Payment Methods
Let Us Help You
© 1996-2022, Amazon.com, Inc. or its affiliates