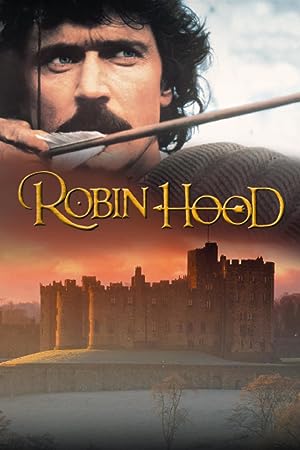 (186)
5.71 h 43 min1991
When a nobleman has his land taken from him by a greedy ruling class in 12th century England, he flees into the forest and becomes Robin Hood, leader of a band of outlaws who rob from the rich and give to the poor.

Rentals include 30 days to start watching this video and 48 hours to finish once started.
Add to
Watchlist
Redeem a gift card or promotion code
By ordering or viewing, you agree to our Terms. Sold by Amazon Digital UK Limited.
Write review

Alex LyonReviewed in the United Kingdom on 08 October 2013
5.0 out of 5 stars
How Red was Robin Hood?
Verified purchase
I think this is probably the best Robin Hood movie ever produced (which is no faint praise, because I'm *in* Ridley Scott's more recent one somewhere) and, because it was made in the same year as Prince of Thieves, has been entirely buried. The only place I've found to buy this English story, made in England with a British cast (not meaning to seem nationalistic or anything) is Italy - fortunately the DVD has an 'in Inglese' option. Seriously - Kostner Schmostner - this is by far the better movie.

Filmed in Cheshire in and around the Victorian Peckforton Castle in December 1990, this is very much a Robin Hood from the 1980s, and all the better for that; England is divided between the clean cut, rich Normans and the hairy, grubby, poor Saxons. The text is laced with reference to the social injustice of rich overlords living on the labour of the poor, and the point that the Normans, being the grandsons of Viking pirates, have no moral authority whatsoever, is tellingly made more than once, as is the one about robbing the rich only being acceptable if the loot is re-distributed to the poor. The script is unashamedly Left Wing, and in places powerfully angry, little wonder when you consider that it was written by Socialists after a decade of Thatcherism.

But to balk at this is to miss (or avoid) the point; the tale of Robin Hood is, at bottom, a fundamental questioning of the ruler's right to rule. Certain versions may show Robin as the true subject of the 'rightful' king Richard Lionheart, only rebelling against King John who, as AA Milne pointed out was 'not a good man, he had his little ways', and even underline the point by bringing the 'true' king on at the end (preferably played by a Scotsman) just to make sure Monarchy is still topsides, and that the English hero is still a good Conservative and Royalist to his boots. You don't need to be Karl Marx, or to know that Richard I was an atrocious king, who didn't speak English and hardly visited England, preferring to spend his time stealing stuff off non-Christians in the Middle East, to see that such a twisting of the story is moronic. No 'true subject' can act against the crown or its officers, which Robin always does (all the witchcraft nonsense in Prince of Thieves is a woeful attempt to sidestep this).

To avoid such a fundamental narrative point is to centrally weaken the story; this film accepts lese majestie without a qualm; Prince John is in no way fit to be running a country, still less to be taxing one, therefore he must be opposed by every honest Englishman.

Or in this case, honest Irishman and Welshman; Patrick Bergin and Owen Teale perform an ironic double act as Sir Robert Hode and his best buddy Will. Englishness come in the form of a young and hirsute David Morrisey as John Little (I didn't know he was that tall). Theirs is not a particularly merrie band of outlaws living 'neath the greenwood tree, rather an embittered gang of the dispossessed hiding up in a cave, featuring a wonderfully sceptical Danny Webb and a poisonously hostile Alex Norton (McAngus from Blackadder), who betrays Marion and ends up hanging dead in the gibbet with his eyes poked out - and it says something for Mr Norton's performance that I don't feel particularly sorry for him.

Uma Thurman's Marion has been praised as 'her best work', which is probably a bit of a stretch, but she's by far and away the best Marion I've seen; strong, proud, gutsy, sexy (actually surprisingly kinky) - and Feminist. Another strength of the script is that this anachronism doesn't seem out of place in the C12. She's also highly convincing as a boy, an illusion that's played with admirable honesty, and she can still do sexy even from under the 5lb of s*** she's covered herself with.

My girlfriend, who understands such things, scoffs at the idea of any C12 rural dyer brewing up purple, but otherwise the level of authenticity is impressive, if clearly in the Monty Python tradition that anyone outside the royal family has s*** all over them; life, for most people, is one long, hard slog - England is emphatically not Merrie.

Among the villains, the sheriff (Miter, played by Barry Stanton) stands very much in third place behind Baron Roger de Guerre (Jeroen Krabbe) and his guest Sir Miles Folcanet (Jurgen Prochnow) - neither of them Frenchmen, underlining the point that the Normans weren't either - and it's these two that really fulfil the Sherrif and Gisbourne roles. Conrad Asquith is suitably grizzled as Lodowick (captain of the guard, I think), though my favourite is Phelim McDermot as the jester - a performance of wonderful manic madness.

The climactic battle to stop the wedding - on All Fools' Day - has more than an echo of the various hippy festivals and the Peace Convoy, hated and trashed by the Tories. The final fight between Robin and Sir Miles is well-staged with the dying villain falling out of a window, under which Tuck waits with open arms; 'Welcome to Hell'.

The end of the film argues, very persuasively, for greater social cohesion; 'Let's stop fighting over whose country it is, and just try to get along together'; it's a necessarily upbeat conclusion to a grim scenario, and it's uncomfortably fitting that the Saxons only accommodated the Normans by allowing them to take everything (and they still have it) and 23 years after the films release the rich are even richer, the poor even poorer, and Britain is in greater need of Robin Hood than ever.

Throda tzenReviewed in the United Kingdom on 07 October 2015
5.0 out of 5 stars
Rip roaring adventure
Verified purchase
Despite the title, this has the original English soundtrack, easily accessed in the extras.
This 1991 adventure is a retelling of the Robin Hood legend and follows the main themes of love and social justice. Filmed in a muddy and more realistic north Wales, England is divided between the rich, well dressed and clean cut Normans and the long haired, badly dressed, poor Saxons, highlighting the cultural differences and social injustice as rich overlords live off the labour of the poor, and the robbing the rich is only seen as being acceptable if it is re-distributed to the poor ‘to whom it belongs’.
Some of the usual suspects are omitted but the ‘gang’ is all there and well portrayed. The script is often angry, the acting fine and the sets superb, even some interiors are foggy due to the smoke from the candles, torches and fires and have a mediaeval ‘authenticity’ to them. The fighting is typically ‘adventure’ stuff in the vein of ‘Indiana Jones’ and ‘Star Wars’ and there are plenty of laughs along the way. “I’ve never met an Englishman that could resist telling a bad joke!” [Emlyn –the Welsh longbow maker].
This avoids the overly romantic love stories of some versions and the bleak ‘realistic’ portrayals of others. It tends to maintain the adventure style found in the 19th-20th century retellings. With no swearing, no nudity or sex and rated as U it’s an adventurous, swashbuckling, tale of daring do and is tongue in cheek fun for all the family, easily rating a *****. Stands head and shoulders above the glossy blockbusters of the past 30 years.
4 people found this helpful

M B viewsReviewed in the United Kingdom on 25 May 2016
2.0 out of 5 stars
Not my Cup of Sherwood
Verified purchase
There has been a lot of hype about this film, some claiming that it is far better than Kevin Costner's "Robin Hood Prince of Thieves" that came out at about the same time. I guess all reviews are subjective but I much preferred the Costner film. I found this version very clunky and lacking in charm. I thought that the humour was laboured and a bit simplistic and that the plot too held no real tension. Patrick Bergman was, by turns, either too silly or too maniacal. Uma Thurman was good though. Generally I was disappointed. But as they say one man's meat etc.

Richard BReviewed in the United Kingdom on 23 October 2014
5.0 out of 5 stars
Best Robin Hood on film
Verified purchase
I saw this on tape way back and remember it as a great film and far better than Mr Costner's effort and after watching on this DVD it's still holds true. Mel Brooks' "Men in Tights" is probably equal but is a spoof on the genre. This film captures some of the tensions that must have existed between Saxons and Normans and the internal conflict in the characters is also good.

Note that this copy is Italian with English so the start screens and main menus are in Italian but you can select English for the subtitles and the audio. This is in reverse to the "normal" where English is the expected medium. Also because it's aimed at non-UK/Eire it doesn't have the BBFC rating on it. I believe it's PG.
One person found this helpful

JoshReviewed in the United Kingdom on 05 February 2015
4.0 out of 5 stars
It does that Robin Hood thing ...
Verified purchase
I like this version of Robin Hood, it really feels like Medieval England. Though it lacks the scale of Ridley Scotts film, it is less silly than the Kevin Costner outing, though has not the pathos of the Sean Connery 'Maid Marion'. And how can you compare any of them to the Errol Flynn classic? ... it was made in such a different time. But this is good, with Yurgen Prochnow a fantastic villain.
One person found this helpful

punisher78Reviewed in the United Kingdom on 27 December 2018
4.0 out of 5 stars
The Robin Hood you forget about
Verified purchase
Darker and more traditional than Costner’s, this version still has more than enough to giddy your way through Sherwood Forest. Lacking in Hollywood flashyness it makes up for it in Gusto.....

helenReviewed in the United Kingdom on 22 August 2012
5.0 out of 5 stars
robin hood 1991
Verified purchase
a very good robin hood film with patrick bergin and uma thurman and edward fox it is a pity that we cant get this film in the uk as it is well worth getting and well worth the money can be watched in ltaiano or linglese this film came out the same time as the other robin hood film this film got over looked becouse the other one had a bigger cast and a bigger buget this one for me is the much better of the two so dont delay get yours today 10/10

MR P BUCZKOReviewed in the United Kingdom on 09 November 2013
4.0 out of 5 stars
Robin Hood
Verified purchase
Watched it then gave it away to a student who was learning Italian. It was quite good, a little short so I wanted more it would seem. I wanted to compare it with Kevin Costner's version which is saved by Alan Rickman. The Costner version is more memorable, the ending of this version is a bit corny.
See all reviews
Back to top
Get to Know Us
Make Money with Us
Amazon Payment Methods
Let Us Help You
© 1996-2022, Amazon.com, Inc. or its affiliates