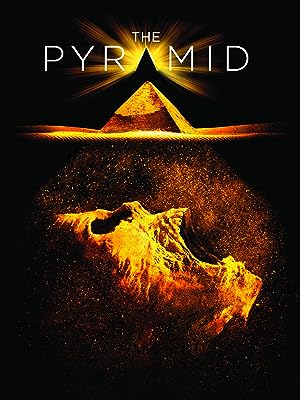 (691)
4.61 h 28 min2014
A team of archaeologists discover a pyramid in the Egyptian desert, but as they unlock its horrifying secrets, they realize they're being relentlessly hunted by an ancient evil.

AlbatrossReviewed in the United Kingdom on 04 August 2015
3.0 out of 5 stars
The pyramid scheme
Verified purchase
Okay, so the ‘Pyramid’ is one of those ‘monster-munching’ films where the cast in generally stalked and eliminated by a – usually pretty unseen due to budget constraints – monster (or pack of them). Normally they’re basically the same as the last one you’ve seen. And this one is pretty normal. Not to say that it’s that bad. Just nothing new.

For a start it could have been so much worse – it could have been ‘found footage.’ In fact... it nearly was. There is a ‘documentary element’ to the film where a fair proportion is shot on handheld cameras by one of the characters. Luckily, this isn’t a major point of the film. It’s mainly used nearer the beginning and I was on the edge of my seat, praying that I hadn’t accidentally watched a found footage film by mistake. Luckily, the main part of the film is shot from a third person perspective – thank the cinematic gods.

And it does have other plus points besides being one of the only modern horror B-movies not to stoop to the ‘found footage’ genre. Its setting is pretty cool, i.e. the fact that a film crew (or is it archaeological crew – I forget – anyway, it doesn’t matter) go under the pyramids (or a new one, possibly – again, does anyone really care?). It’s about a group of people in a pyramid getting stalked and eliminated by things that you really don’t want to meet under a dark, unexplored pyramid in the middle of the Egyptian desert (if indeed it was even set in Egypt – who cares?).

The two groups of people are both what you’d expect. The humans we’re supposed to care about are just about passable. For those of us who have seen (and loved!) the British TV show ‘The Inbetweeners’ will enjoy seeing James Buckley doing something other than chase women and we’ll definitely root for him. Then you have the monsters. They’re CGI. That can work, but mainly it doesn’t. Here, the atmosphere is pretty dark (literally!) so the lack of light does cover up any visual indiscretions.

As I mentioned, what you have here is a totally ‘normal’ monster munching movie. It’s nothing terrible, but nothing you’d really remember if you were a fan of the genre. If you’ve seen the ‘Decent’ then you’ve basically seen the better version of this movie. Just stick to that.

Tom CatReviewed in the United Kingdom on 19 April 2015
4.0 out of 5 stars
Worth watching
Verified purchase
SPOILERS IN THIS REVIEW!

I'm giving it four stars based on where I rate it in comparison to other films in this genre and, more importantly, it's entertainment value. I know many producers would love to replicate the success of Stephen Sommer's "The Mummy", and unfortunately there have been a lot of terrible films hanging on the coattails of that film. So far, IMO, this has been the best of them. I have some knowledge of Ancient Egypt and the circus that would accompany any real discovery of a newly discovered pyramid or major tomb, something that is always missing in these films as the plots require a handful of incompetant and seemingly phsycologically damaged missfits to explore with no proper equipment or supervision, with perhaps the leader being a mad or evil scientist, not in this film though. In real life an Egyptian of probably governmental minister level and his minions would be with them. That said, and to it's credit, this film recognises this and sets the film during the revolution when some control had been lost. It would be easy to nitpick on Egyptology matters, but it's only entertainment, not a history lesson, and besides, this film does it far better than others. Even the best films sometimes have a moment were to progress the story something happens, or does not happen, that the audience will think "huh!". Why in Lord of the Rings did not Frodo and Sam simply get on giant eagle at the beginning of the film and have mission completed in about twenty minutes, well, no story otherwise... In this film the explorers are in a chamber with the floor collapsing, yet instead of moving to the clearly more stable outer edges, or at least laying down to spread the weight, they begin to move to the middle, the weakest point, with inevitable results. Then, in the lower chamber they have fallen into, they still stand about in the middle when it is obvious that more stones are likely to come crashing down. Oh! too late..... Minor points, but I guess that's all part of the "suspention of disbelief" thing.

In the end result it's all supernatural so anything can happen, any seemingly irrational event can be normal, cats can live in a closed environment with no food source other than themselves, and with an almost obligitory Akhenaten reference about the pyramid predating him by some centuries, then these cats survived for about 4,000 years. However, I thought the almost mummified looking modern day "Sphynx" cats were a unique and almost "cute" touch in this film. Anubis was good, and not having seen any spoilers for this film a complete surprise, as I thought the monster would be yet another boring mummy of some evil pharoah, priest, jilted lover etc etc. Yes, a bit over done, and the normal film tricks of when the monster can kill you in the blink of an eye, they suddenly start procrastinating and taking their time while the hero makes amazingly unrealistic escape, something even the best adventure films are guilty of. I was looking also beyond simply seeing a CGI monster on film, but thinking what would it be like if one of these bizarre looking Egyptian gods with their, mostly, animal heads were real, and in that respect the film does a good job. I think, though not 100% certain, that this is the first time I have seen a representation of an Egyptian god as a living and mobile creature in a film, though really Anubis should be seen, as most of them, as a good guy, but perhaps being trapped in a pyramid for about 4,000 is not fun. However, in the end result I thought the film was fun and will even watch it again. Maybe they left room for a sequel, don't know.
2 people found this helpful

whippet crazyReviewed in the United Kingdom on 23 March 2020
1.0 out of 5 stars
Total rubbish.
Verified purchase
My oh my. What a load of rubbish, anyone knowing anything about Ancient Egypt will be totally aghast about the total nonsense vented about Anubis and the belief Egyptians had in the afterlife. I don't think I have ever given one star in my reviews, but now I have.

john longstaffReviewed in the United Kingdom on 14 February 2019
5.0 out of 5 stars
Watch
Verified purchase
I like it. Plenty of scares and jumps I guess. Decently worth watching graphics are good to
One person found this helpful

Alan JonesReviewed in the United Kingdom on 21 April 2015
3.0 out of 5 stars
I thought the film was fun and worth a watch
Verified purchase
I enjoy films in the style of found footage, I don't think the genre has past it's time yet even though the attempts to get it right seem tiring. A big downfall for anyone making a film in this style though can be the application of a big budget. The key is to keep it simple and not get too carried away with the cinematography. By attempting to subtly enhance your scenes with some angles that are filmed out with the use of the scripted camera operators doesn't just break the imaginative realism that the film sets out to encourage, it also puts the film at risk of being viewed as though it is not found footage, and in turn creating a wrong perception - that it is a low budget attempt at a big budget film. The naturalistic acting was pulled off as the cast did well to make you feel as though they were living the situation, not acting it out, and the viewing through Buckley's camera as he performed worked in the film's favour. Having said that, it takes some work on the viewers' part to choose to believe this as the cast are fairly well established (something else that should be avoided in found footage). The score suited the backdrop of the film however it also makes no sense to compose to found footage. Big budgets can work (Cloverfield) though the budget should be weighted towards locations, props, special effects etc. Going overboard with casting, crew, sound and music department etc. dilutes the aim of the film. To summarise, I thought the film was fun and worth a watch, just not exciting in the same way that other found footage films can be. The sets in this film are outstanding and who doesn't like watching a story with discovery and Ancient Egypt, and Jay from the Inbetweeners?! James Buckley does a good job - through this work - of removing the likelihood of being typecast.
One person found this helpful

alan a.Reviewed in the United Kingdom on 19 September 2019
5.0 out of 5 stars
Keep out of pyramids everywher!
Verified purchase
Liked the plot. Disliked long periods of darkness - like a black cat in a coal cellar at midnight during a power outage! Loved the monster - really real and accurate.