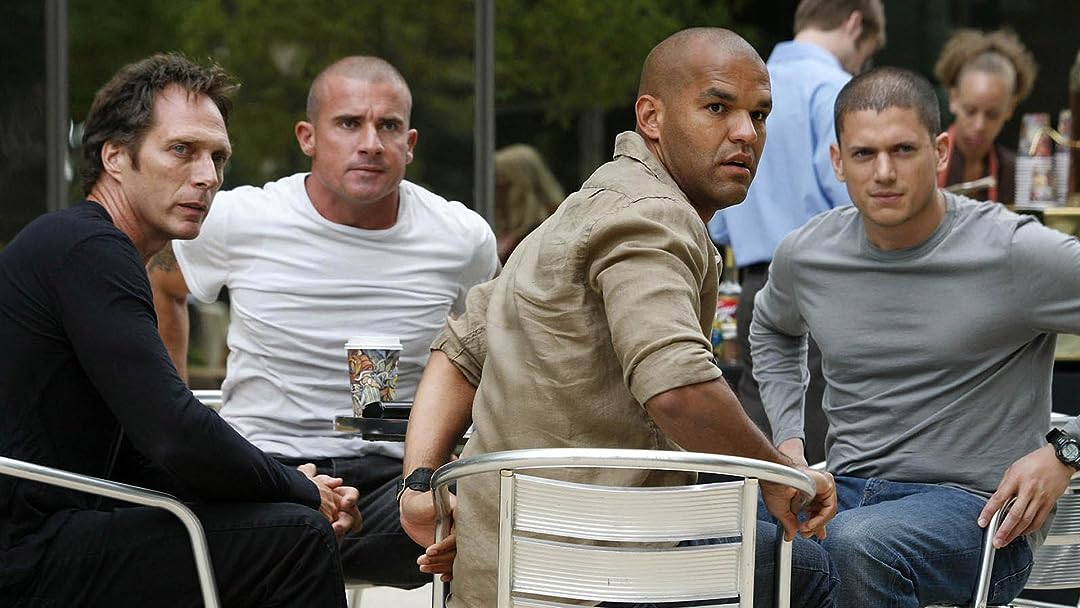 (1,269)
8.82006X-Ray
Lincoln Burrows is currently on death row and scheduled to die in a few months for an assassination his younger brother, Michael, is convinced he did not commit. With no other options and time winding down, Michael takes drastic measures to get himself incarcerated alongside his brother in Fox River State Penitentiary.

dick hardenReviewed in the United Kingdom on 04 December 2014
5.0 out of 5 stars
Astonishingly brilliant - love every second of this series
Verified purchase
An astonishingly brilliant series. I have to say when I purchased it I didn't expect such a masterpiece, and I was entirely wrong. I am now into part 2 series 2, and there has not been one single episode that has left me even remotely bored, or even drifting. I am GLUED to the sofa with this one. It has everything. First, a perfect mix of characters, from Lincoln - the strong silent type trying to avoid the electric chair, to his brother Scofield, the more articulate and clean cut of the two, and the brains behind the group of escapees. Then there's the psycho mental patient, whose psychosis enables him to memorise in detail Scofield's elaborate tattoo, which ultimately lands him a ticket out, then there's the best villain on telly in the history of TV villians - Teabag - who is beyond amazing (I think he won some awards for this role, and well earned), able to be charming and even likable whilst at the same time being a complete, violent psycho who will do just about anything without hesitation or conscience. Some of the lines he throws out, with that gentlemanly southern accent, both curdle your blood and make you squirm in delight. Then in Season 1 there is Victoria (played by our favourite little angry minx from the Mentalist, Robin Tunney), who plays Lincoln's ex girlfriend turned solicitor as who is very much like her character on the Mentalist. Then there's a mafia dude with connections to a plane, Then there's Scofield's Puerto Rican cell mate, who is a good bloke only doing a 16 month stint but who wants to break out to be a family with his pregnant girlfriend before his cousin steals her away, Then there's the old boy, who apparently has stashed 5 million dollars somewhere in the event he ever gets out, Then there's the kid (Tweener), the prison grass, Then there's the ex soldier who is lying to his wife and daughter who still think he's fighting away in Afghanistan, and the list goes on. The show brilliantly and effortlessly makes the cons the good guys, and most of the correctional officers ("Bellick" does an amazing job as an oafish, slightly stupid CO who still lives with his mum) and police, the feds (including a pill popping, dirty one with a few rather large skeletons in his closet), and even the president, the bad guys. Apart from the warden who is a good man who seems to empathise with the prisoners. As well as doctor Sarah, Scofield's love interest, a former addict who is actively rebelling against her pro establishment governor dad. And I didn't even recognise Holly Valance at first, as her eastern european accent was very convincing in her role as Scofield's recently immigrated girlfriend on the outside, and she did a good job.

The pace of the show is perfect. And the writing is so clever that just when you think you can predict what's going to happen, the game changes. It seems a very realistic portrayal of life in a maximum security prison, and then, once they break out, a bit of a stretch how they manage to evade the law for so long, but it's all simply delicious. Particularly how Scofield always manages to outwit and make a mockery of the FBI and everyone else they come across.

This is going to be one collection I keep, and watch over. And I can't say that about most DVDs I come across.

Thumbs way up on this one. Absolute gem. If you liked Breaking Bad, you will not be disappointed by Prison Break, as it's at least as good as, if not, a bit better - and I never thought I'd say that.

Anna KrauzReviewed in the United Kingdom on 19 June 2017
5.0 out of 5 stars
I couldwatch season 1 all the time
Verified purchase
I could watch season 1 all the time. best show I have ever seen so far. the whole story is captivating , keeps you on the edge the whole time. this is the type of the show you can watch all over again and again ( like Friends :) ). It won't be available on Amazon Video for long so I bought all Seasons :):):). So if there are any fans , make sure you've got DVD or you buy via Prime.
One person found this helpful

P. S. BoultonReviewed in the United Kingdom on 19 March 2016
5.0 out of 5 stars
Riveting, compulsive viewing!
Verified purchase
I thought this series was excellent - a real treat. Compulsive, riveting viewing. Each episode ends on a cliff-hanger. The idea of 22 episodes about a simple prison break sounds uninteresting but the plot is much more complex and interesting than that. There is loads of plot complexity and intrigue and even some romance. It's brilliantly acted and well scripted. The odd graphic violence didn't bother me too much - it is graphic, but at the key moment you don't actually see, you just imagine! But some viewers may be put off by that. Other than that, give it a go - it really is good!

The fact that it is set in a prison means that many of the characters are dark and troubled - this is not a show for people who are squeamish or easy offended.

But I find the writing and acting original and immersive.

£5 for the whole first series is a trivial investment.

James DunnReviewed in the United Kingdom on 25 July 2021
4.0 out of 5 stars
Exciting / frustrating / boring all in one!
Verified purchase
Sort of addictive because of some seat gripping action but there are too many elements that are too incredible to simply suspend belief over. As a result it starts to get a bit frustrating/boring.

Cas AllasReviewed in the United Kingdom on 18 May 2009
5.0 out of 5 stars
Wow!
Verified purchase
I've just rented this complete series and have truly loved it. Now I can't wait to rent the next.

I can't say it's better than Lost & 24 because I love all of them just the same. 24 was the first, then Lost and now Prison Break. All brilliant to watch. They all hook you in well. I was a little a worried that there would be lots of violence being based in a man's prison. But I found that the scenes were cut well and were not too graphic.

The suspense keeps you thinking and wanting to watch a lot more than it gives you, similar to Lost, but completely different of course.
All charachers' on these shows are great fun to watch develop throughout each series.

BenReviewed in the United Kingdom on 29 September 2006
5.0 out of 5 stars
Top notch TV!
Verified purchase
What a blinding show! Every aspect of this series from the depth of the characters and the actors who portray them to the plot twists and effects are all excellent! I'm gripped from the moment I turn on the TV to the time the end credits start to roll. It's like watching one big, long action movie. An early highlight in the series is the two parter 'Riots, Drills and the Devil' - all sorts going on there.

I recommended the show to a friend, who hadn't heard of the show before I mentioned it. But he promptly went out and bought this boxset and now he's as hooked as I am. Anyone into action movies, or prison drama is going to love it.
3 people found this helpful
See all reviews
Back to top
Get to Know Us
Make Money with Us
Amazon Payment Methods
Let Us Help You
© 1996-2022, Amazon.com, Inc. or its affiliates