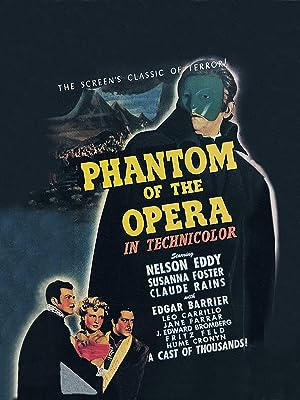 (162)
6.41 h 32 min1943
A crazed composer (Claude Rains) transforms into a masked phantom who schemes to make a young soprano the star of the opera and wreak revenge on those who stole his music.

JimboReviewed in the United Kingdom on 15 May 2013
5.0 out of 5 stars
wonderful movie
Verified purchase
Excellent modified version the audio is beyond good I really cannot rate it any higher.I bought 2 copies 1 for a very good friend who loves that sort of movie

paul blockReviewed in the United Kingdom on 24 August 2016
5.0 out of 5 stars
tops1
Verified purchase
Absolute brilliant lots of extras excellent sound the picture quality so many extras

Brian StentReviewed in the United Kingdom on 24 September 2014
3.0 out of 5 stars
Three Stars
Verified purchase
Not a bad film, but rather far fetched ending

Norman JonesReviewed in the United Kingdom on 23 August 2015
5.0 out of 5 stars
1943,Phantom stll the best
Verified purchase
Brill

joseph jesmontReviewed in the United Kingdom on 18 November 2013
1.0 out of 5 stars
reason i cannot rate it
Verified purchase
I have ordered this dvd and did not realise that it was blue ray and cannot play it because I do not have the appropriate equipment to view

D J Jackson: Passionate about Film.Reviewed in the United Kingdom on 21 April 2021
5.0 out of 5 stars
HANDSOME, COLOURFUL, TUNEFUL: A TRAGIC PHANTOM NOT HORROR.
This is a review of ‘The Phantom of the Opera’ from 1943, the penultimate in Universal Studio’s batch of iconic ‘Monster Horrors’, along with films like ‘Frankenstein’(1931) and ‘The Invisible Man’(1933).

Firstly, the film itself. Having watched the other 7 films featuring Universal’s ‘monster zoo’, we ventured to watch ‘Phantom’, which seems to be generally less well-regarded than most of the others in the selection. It is one of at least 6 film versions of Parisian Gaston Leroux’s famous Gothic Horror novel from 1910, of which one is the Lloyd Webber musical, one is Italian, one is from Hammer, with Herbert Lom as the Phantom, and one is the magnificent silent film, from 1925, starring Lon Chaney. Some of these films are more ‘horror-lite’, others (the Chaney version for example) are the full Gothic. Also, some follow Leroux’s original storyline more closely than others.

This Universal film suffered badly, as the first remake following Chaney’s iconic Phantom ~ also from Universal. Which is a pity, because it has 2 large, fairly obvious, advantages. Firstly, it is not a silent film! And secondly, it was made in Technicolor.

The music is by Edward Ward; he received his 7th OSCAR nomination for a quite superb score. He wrote a lullaby, and adapted it into a Piano Concerto. He adapted themes by Chopin to create one opera, and music from Tchaikovsky’s 4th Symphony to create another. A third, the opening ‘Martha’, is a genuine opera, dating from 1847. Sung by stars Nelson Eddy (a classically-trained Baritone) and Susanna Foster (also a trained singer), and a voice dub for the arrogant diva Biancarolli (Jane Farrar), the lengthy excerpts are tuneful, thoroughly enjoyable and opulently staged. Also, no dumbing down here ~ 2 are sung in French, one in Russian.

The sets (filmed on the same Sound Stage as the 1925 version) are magnificent. The Paris Opera is rich and luxurious, there are some other gorgeous interiors, the Phantom’s underground haunts look suitably dank and forbidding, and the vertiginous scenes in the Fly Loft above the stage are superb. The costumes too are ravishing, and the colours just flood the screen. Unsurprisingly, the film won the OSCARs for Art Direction and Cinematography.

Neither the 1925 version nor this one stick overly closely to Leroux’s book ~ this one departs further, though the story works very well. It places emphasis on the music and to a degree, the romance. The effect is to soften the horror, and the result is far more a tragedy than an outright scare-fest. British-born Claude Rains, very successful as the original ‘Invisible Man’(1933) because of his mellifluous voice, is similarly effective, and very touching, as the Phantom. Eddy, and Edgar Barrier as Inspector Dubert, provide some deliciously humorous leaven, and Foster is lovely as the romantic lead.

VIEWING NOTE: We watched it on an All Region Blu-ray, from the 2012 8-disc Box Set from Universal Pictures UK, entitled ‘Universal Classic Monsters - The Essential Collection’, purchased from Amazon. Like the other films in this great value set, it has been digitally restored, with HD sound and pictures. The print is beautifully clear, clean and sharp. The disc contains plenty of bonus extras.

David GarsideReviewed in the United Kingdom on 26 June 2018
5.0 out of 5 stars
A classic
Although I don't consider this a horror movie it is a sumptuous gothic drama in glorious Technicolor.The blu ray transfer is excellent and sounds superb.
See all reviews
Back to top
Get to Know Us
Make Money with Us
Amazon Payment Methods
Let Us Help You
© 1996-2022, Amazon.com, Inc. or its affiliates