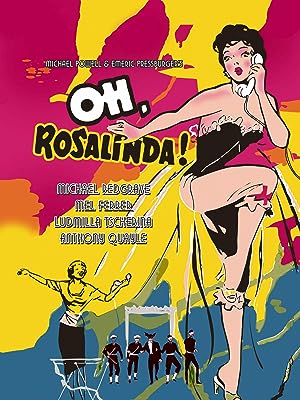 Bruce EderReviewed in the United Kingdom on 06 December 2019
4.0 out of 5 stars
A Four-Star Movie In A Bargain-Priced Package
Verified purchase
OH . . . ROSALINDA! was, for many years, the "white whale" of Powell and Pressburger productions. Alone among the films made by their corporate alias The Archers, it simply failed to turn up anywhere. Over the decades, their wartime pictures and the immediate postwar titles had shown up from time-to-time on television and, occasionally -- apart from The Red Shoes and Black Narcissus, which did get played more often -- in theaters around New York. I'd even managed to catch Ill Met By Moonlight, The Elusive Pimpernel, and Gone To Earth/The Wild Heart, but not ROSALINDA. Then, about 20 years ago, under the sponsorship of The Piper-Heidsieck Champagne House, The Archers' nearly complete output was shown on theater screens in New York City (I saw A Matter of Life And Death seated next to Ivana Trump at the Museum of Modern Art, which would've made quite a picture, the perfectly coiffed and made-up Czech ex-model seated next to someone who looked like a fugitive from a rummage sale, like a scene from a Klicpera farce . . . ).

I compared seeing it for the first time, in a theater, with the experience of materializing inside of the most delicious birthday cake in the world and being asked to eat your way out of it (not unlike the experience of hearing the underlying Johann Strauss II Fledermaus for the first time). Each new scene and every shot was a delight to the eye (and the ear), and a tease to the mind as well, as the re-purposed Strauss score brushes up against the absurdities of the four-power occupation of Vienna near its end, circa 1955. (As it happens the end of that occupation by the Americans, the Soviets, the British, and the French was, in real-life, marked by musical events, most notably the re-opening of the Vienna State Opera in November of that year [with Beethoven's Fidelio]; and its subject matter also puts OH . . . ROSALINDA! into a small sub-category of what one might call "Cold War musicals" that includes Cole Porter's Silk Stockings).

As the last grand artistic statement by The Archers, closing out a trilogy started with The Red Shoes and The Tales of Hoffmann, but delayed for three years following its initial conception, ROSALINDA is a bold, powerful and overwhelmingly gorgeous THEATRICAL film, and one that, by virtue of its subject matter, brings us back to the reality of the postwar era -- it's an odd, aesthetically challenging venture in the wake of The Red Shoes, which swept us along in a mindset of art once again being something worth dying for, and The Tales of Hoffmann's complex plunge into often dark artistic recesses.

I wish I could say that the movie translates well to the small screen, but that's not possible.

The only Archers production shot in CinemaScope, the anamorphic image (2.55-to-1) just doesn't work on a home-screen, or at least not on this viewer's 28-inch monitor. Powell fills the screen more than well enough in his only venture into the format, and often with diverting images in juxtaposition, but the inability to do any close-ups, coupled with the overt artificiality of a film shot to a pre-recorded audio track, becomes much more jarring in miniature than it seemed on the bigger-than-life theater screen. This was a movie meant to be seen in the latter venue, LARGER than life, which immediately allows the viewer to bound over and well-past the miming -- in a theater, it all holds together, whether we're dealing with Anton Walbrook's wryly sardonic dialogue, Mel Ferrer's wily romantic machinations with the sultry Rosalinda (Ludmilla Tcherina), or the transitions to arias, choruses, and dances. But the transitions, and the points where matters all "join" take much more of an effort for the viewer at home to ignore. And the artifice that was on display in The Archers' adaptation of The Tales of Hoffmann is much more pronounced here, and not as smoothly woven into the proceedings.

That said, this is still a good effort by the DVD producers. There's obviously some room for improvement in the source material, when and if someone decides to spend the money on it, but the movie is still a lively diversion and a delicious confection for the eye. The chaptering is reasonably generous, but there are no notable extras, apart from the trailer and an array of stills, and a booklet reproducing a lot of promotional material in extreme miniature; and this release is obviously far superior in sound and image to one bootleg DVD that I have somewhere in my possession (and can now dispose of). I'm happy to own this release, though I'll make it my business to see ROSALINDA in a theater again, should the opportunity arise once more (as it now has on three occasions in 20 years).

Martin ReedReviewed in the United Kingdom on 04 December 2019
4.0 out of 5 stars
Modified Rapture
Verified purchase
The Archers had 'Die Fledermaus' lined up as far back as 1951 when it's predecessor 'The Tales of Hoffman' was produced. However it wasn't until 4 years later that it went into production - by which time Pressburger had directed a film of his own and Powell hadn't worked with a camera for 3 years. Both Powell & Pressburger had differences opening between them, and were to be in the last stages of their partnership.

The same techniques as Hoffman were used, shooting on a silent sound stage to pre-recorded sound-track, and designs were again from Hein Heckroth. However the magic wasn't quite there this time, & it is telling that P&P themselves did not want 'Rosalinda' included in their later retrospective screenings.
The musical sequences are short, linked via scenes of unaccompanied dialogue, & it certainly doesn't come together as a serious piece of cultural art like it's predecessor. Whereas in 'Hoffman' the painted sets were dark & mysterious, in 'Rosalinda' the continual brightly lit abstract scenery becomes rather wearing to the eye.

However... this was the first P&P film shot in wide-screen Cinemascope with mono-pack colour film, so technically it turned a corner. The restoration is immaculate, colour well balanced & saturated, not a scratch or piece of dust to be seen. It's a treat to see this almost lost film in such an immaculate state.

The main extras are the extensive gallery of still pictures, publicity & studio work in progress, shots which cover a lot of ground. The soundtrack album can be found on Spotify. There is also an 8 page booklet of press material relating to the film (see pics) which is rather curious. Squeezed to a small size to fit in the BluRay case, it's completely illegible without a powerful magnifying glass. Reformatted to maybe 2 x the page count it would have been a more useful addition to the package.
4 people found this helpful

ThaliaReviewed in the United Kingdom on 30 May 2021
5.0 out of 5 stars
Happy and colourful
Verified purchase
We enjoyed this. If you’re a serious opera fan you might not like it, but we found it fun. The singing is superb, the costumes are beautiful and the actors take their parts well. The icing on the cake, for me, was Anton Walbrook’s cheeky performance as Dr Folke. The music is superb and stays with you for days, We will certainly watch this again and I might even buy it. We have seen the original opera which we enjoyed but in these lockdown times it’s good to see something more lighthearted.
One person found this helpful

R JacksonReviewed in the United Kingdom on 31 December 2020
5.0 out of 5 stars
Inimitable Powell & Pressburger fizz!
Verified purchase
They had me at the paper birds around Ludmilla Tchérina's bamboo-framed bathtub. Actually they had me much earlier, at Walbrook's preamble: "I'm the fellow who gets the French Champagne for the Russians, the Russian vodka for the French, the Scottish whisky for the English, and the German cameras for the Americans."

You either fall for Powell & Pressburger or you don't. Did you perhaps watch 'The Red Shoes' and think, "well, this is good but it needs more gaudy gold and silver, paper flowers, stucco cherubs, neo-baroque painted sets interrupted by a parody Soviet newsreel, Michael Redgrave being ordered to strip by Anton Walbrook, Anthony Quayle as a boozy Russian general and a LOT more sparkling Strauss"? If so, then you've found a lovely way to pass an evening. Prost!
2 people found this helpful

vernonReviewed in the United Kingdom on 28 August 2019
5.0 out of 5 stars
Memories.
Verified purchase
I saw this as young boy. I was enraptured and saw it least three times 8p to get into the cinema and 4p to spend. These were wonderful memories not to be forgotten. I look to watching it again.
4 people found this helpful

Brian M. PriceReviewed in the United Kingdom on 25 July 2022
5.0 out of 5 stars
POWELL AND P6ESSBURGER
Verified purchase
NO T AS GOOD AS RED SHOES OR AS GOOD AS TALES OF HOFFMAN BUT STILL VERY ENTERTAINING

David AllenReviewed in the United Kingdom on 24 October 2019
1.0 out of 5 stars
Give this one a miss.
Verified purchase
Nothing much to say here ; a pristine quality print of a total misfire attempt to bring good music to the masses.
An array of outstanding actors - all totally wasted.What on earth did they all have in mind ? The bin for this one.
2 people found this helpful

mark harveyReviewed in the United Kingdom on 05 January 2020
5.0 out of 5 stars
excellent audio and visual quality
Verified purchase
the remastering of this DVD brought the original opera quality right into the living room.
See all reviews
Back to top
Get to Know Us
Make Money with Us
Amazon Payment Methods
Let Us Help You
© 1996-2022, Amazon.com, Inc. or its affiliates