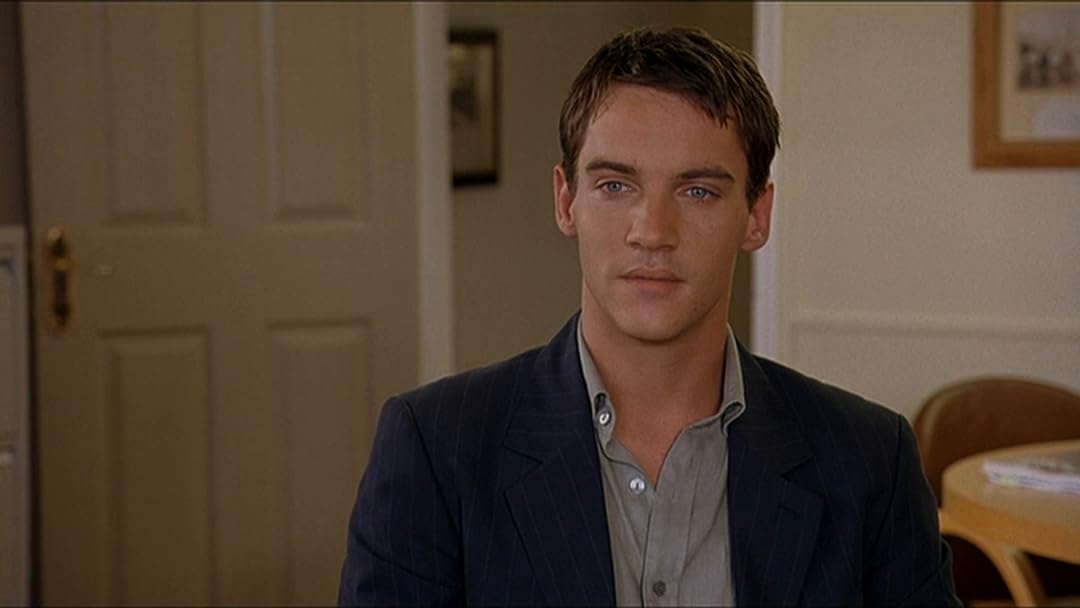 Included with THE ICON FILM CHANNEL on Amazon for £4.49/month after trial

Watch with THE ICON FILM CHANNEL
Start your 7-day free trial
Add to
Watchlist
By ordering or viewing, you agree to our Terms. Sold by Amazon Digital UK Limited.
Write review

Mr. A. ChilcottReviewed in the United Kingdom on 26 April 2019
5.0 out of 5 stars
Intriguing, complex and great acting
Verified purchase
I originally watched this film a number of years ago, I felt at the time it was overrated and given greater credence than it deserved. I thought it was distinctly minor Allen and couldn’t really understand that Mr Allen considered this his favourite of all his films. On second viewing, after a break, I have to admit that this has stood the test of time. As long as you get past the British upper class cliches and just go with it, you will find an absorbing, well acted and intriguing version of Crime and Punishment. It also looks magnificent, recommended whether you are a fan of our Woody’s or not.
11 people found this helpful

coraReviewed in the United Kingdom on 27 March 2018
3.0 out of 5 stars
Woody Allen is Attempting Film Noir
Verified purchase
The product description gives as much of a plot summary as you're likely to need for this attempt at a thriller/film noir by Woody Allen. Unfortunately I could never warm to the character of Chris (Jonathan Rhys Meyers), nor to most of the other players in this, with the exception of Matthew Goode's character. The cast is rather more exciting than the story, everybody turning in solid performances indeed. Scarlett Johansson is terrific, as is Emily Mortimer. Brian Cox and Penelope Wilton well cast. The portrayal of the British upper classes is rather cliched with opera and art galleries and shooting featuring prominently.

Unfortunately this is not one of Allen's better films. There is no humour here. The element of whimsy which he does so well is absent. and that's a real pity. But maybe that's just me. Others seem to like it. And that's fine. If anything about it appeals to you give it a go. After all, it's not the worst film ever made. The cinematography is masterful and Mr Allen certainly does have an eye for beautiful shots. Also, he chooses to stay in the director's chair and we are spared his irritating presence on the screen and don't have to listen to his endless plaintive yammering. That, for me, is another point in favour of the film.

PhiloctetesReviewed in the United Kingdom on 02 April 2020
5.0 out of 5 stars
Crimes and Misdemeanors II: Woody's pessmism serves up a 5-setter.
Verified purchase
[4.5 stars]

This film is Crimes & Misdemeanors meets The Talented Mr Ripley.

At two hours I reckon it's Woody Allen's longest movie, and at times it feels that way. I've long resisted Match Point. Advance notices for Woody's London period were not good, and You Will Meet A Tall Dark Stranger was total drek, but it's well known Match Point was a hit in USA and Allen rated it amongst his best, maybe even the best.

Failed pro tennis player turned instructor, Chris (Jonathan Rhys Meyers) lucks out, as they say in the US, when his new tutee, Tom (Matthew Goode), takes a shine to him and invites him to the opera. He meets the family, starts a relationship with Tom's sister Chloe (Emily Mortimer), and is rapidly propelled into a swish lifestyle and a new career in the city. The problem is that sometimes like attracts like, and as full and sensuous as Chris' lips might be, they are equally matched by those of Tom's fiancée, Nola Rice (Scarlet Johansson). Nola's resistance is just the challenge a lucky lad like Chris is craving, and soon he's taking bigger and bigger risks to see her, and that's not even half the story.

I've recently concluded that the mistake some critics make, especially casual critics, when it comes to Woody Allen's movies, is that his is a cinematic world unto itself, as distinctive as Scorsese's mean streets or Lucas' galactic space wars, or Tarantinto's pulp fiction. One enters, as actor or spectator, the Woodyverse. Ergo, as a fan, I must be receptive to Woody's world overlapping with my turf, that is to say London and the UK. Contrary to some of the dissing, I found much of the dialogue persuasive, only rarely did it sound like american conversation translated into English drawing room knock-up (the tennis kind of knock-up). Rhys Meyers' Chris is impressively decorous in his manners, polite to a fault, although not a double fault (boom boom). He certainly is model handsome, and with Scarlet 'crippler' Johansson on hand as well the sheer pulchritude can feel overwhelming. The scenes of intimacy are, i think, a departure for Allen, and they walk the line between serious displays of passion and comedic pratfalling (e.g. the blindfold bit). Allen achieves genuine tragicomedy in the later acts when Chris puts his plan into action, and the effect amplifies the tension considerably. There's also something menacing about the use, not only of opera, but of vintage opera recital on the soundtrack.

Once again, as with Crimes..., Match Point puts us in a Dostoyevskian drama of moral turpitude. The problem is that Allen's pessimism is unleavened by an advocate of faith, and there is little in the way of Crimes..' dialoguing on the matter of conscience and criminality. Hence, this is more like The Talented Mr Ripley, less like the Russian master's classic antihero, the untalented Raskolnikov. But hey, as Allen often says, and the movie insists, so much in success comes down to luck.

All told, this was a very good film and a notable one in Allen's extensive oeuvre. And even if those intimate moments don't quite ignite the way one might wish them to, can't deny what Chris Rock said about it. MATCH POINT IS SEXY!

UPDATE (Xmas 2021): watching again, it is easier to understand why Allen is so proud of this movie. He succeeded in doing something outside of his wheelhouse (i.e. comedy). I particularly like the police-at-the-scene bit which has remarkable versimilitude. There are still one or two aspects of Match Point with which I take issue, but what is not in question is how good everyone is, right down to the smallest parts. Johansson's Nola is the angriest character Woody has created since the melee that was Deconstructing Harry. Impressive. Rhys Meyers' Chris is no Tom Ripley but his character invites a more ambivalent response in the viewer which is arguably more stimulating. Snarky criticism at the time of Match Point's release, that it's a tourist's eye view of London, is unwarranted. It's upscale London and so what? [9/10]

The Truth is Out ThereReviewed in the United Kingdom on 01 January 2021
1.0 out of 5 stars
Just a bad movie
Verified purchase
I watched this movie simply because of the stars in it. The romance between Scarlett Johansson and Jonathan Rhys Meyers was not convincing - the script wasn't convincing - I'm sure they did their best.
I got so fed up with waiting for the end of it that I nearly switched it off but didn't - and the final 2.04 minutes let the silly cheat get away with it. For 2 hours I allowed myself to be bored and promised myself never to watch another Woody Allen movie again.
One person found this helpful

A ReaderReviewed in the United Kingdom on 30 January 2020
3.0 out of 5 stars
Pretty poor really
Verified purchase
This film is a pleasant enough way to pass a few hours, but honestly it's not a good film.

The plot is not believable, and in parts it's just preposterous. The two main characters are pretty wooden and shallow. Scarlet is good to watch, but there's just not much even she can do with the part she plays.

In many ways, with all its views of London sights and streets and its focus on the well-off, the film seems to be trying to please an international audience, tourists who like the nice side of London and afternoon tea.

Amazon customerReviewed in the United Kingdom on 30 March 2018
4.0 out of 5 stars
Allen returns to form
Verified purchase
Not your standard Woody Allen fare but part of that strand of his work which strains towards significance a la Bergman. Usually the operative word is strain, but this combines a deliciously dark view of life with a fine sense of story sculpture and pacing. Jonathan Rhys-Myers is an outstanding anti-hero, thanks to Allen's great writing of a tremendously attractive, ferociously self-centred plausible villain. Some of the other characters are a bit vague, Brian Cox's Daddy is too good to be true and Johansson is an acquired taste, but as a morality tale of our greedy times this is a fine piece of work. As an audience we're drawn into the evil and gleefully connive at it, until something happens which is truly shocking. In some ways it's a reworking of old themes, but that's OK because Shakespeare did the same thing. If you like films for grown-ups, this is for you.
2 people found this helpful

susan FaulknerReviewed in the United Kingdom on 13 January 2021
1.0 out of 5 stars
A pretentious film full of cliches
Verified purchase
Described as a dramatic thriller I am confounded by the fact nothing happened for almost 2 hours bar upper class British drivel in a posh country house. The plot was implausible, the script predictable and I can only feel sorry for the incredible actors dragged into this film under the illusion that it would be a remarkable movie.
One person found this helpful

Pearl BReviewed in the United Kingdom on 28 January 2021
1.0 out of 5 stars
Terrible Film Despite Excellent Cast
Verified purchase
This was, without exaggeration, one of the worst films I have ever watched, and has borne out my theory that Woody Allen’s best films were in his early days. Cliched, implausible and preposterous in equal measure, I am surprised he got funding for it. Even the excellent cast cannot save this absurd movie. If you want Woody Allen, watch Hannah and Her Sisters or Annie Hall.
See all reviews
Back to top
Get to Know Us
Make Money with Us
Amazon Payment Methods
Let Us Help You
© 1996-2022, Amazon.com, Inc. or its affiliates