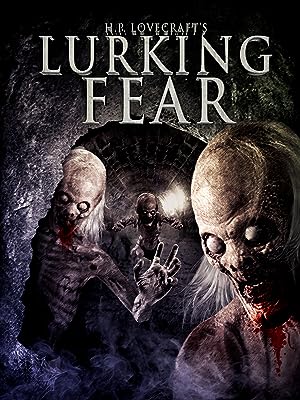 (118)
4.51 h 17 min1994NR
Now REMASTERED and UNCUT! The town of Leffert's Corners has been plagued by unearthly beings for decades, and now there is only a few people left…what everyone is not aware of are the humanoid creatures lurking underneath the holy grounds. Based on the classic H.P. Lovecraft tale!

Included with Full Moon on Amazon for £3.99/month after trial

Watch with Full Moon
Start your 7-day free trial
Add to
Watchlist
By ordering or viewing, you agree to our Terms. Sold by Amazon Digital UK Limited.
Write review

I love New YorkReviewed in the United Kingdom on 30 October 2016
4.0 out of 5 stars
Enjoyable 90's horror.
Verified purchase
First time viewer of this film and I actually rather enjoyed it. I loved the setting and Jeffrey Combs who played a supporting role was really good. You're typical bunch of strangers and locals holed up trying to survive an onslaught this time by some mysterious creatures.

The release itself is rather basic, with a couple of extras. The picture is pretty good, in fairness its a budget release so overall I think it's good value.

Kent Vikman Reviewed in the United Kingdom on 22 March 2020
4.0 out of 5 stars
Martense family reunion.
Verified purchase
Since I love Lovecraftian movies, this one is no exception. The small town of Lefferts Corner is plagued by an unseen evil and a few brave souls have gathered at the town church to end the suffering.
One person found this helpful

ScottPaul ScottPaulReviewed in the United Kingdom on 20 July 2014
4.0 out of 5 stars
Lurking Fear's luring near and finally finally it's working here.
Verified purchase
Appearing more knockabout through sometimes scant direction and a sporadic but bungled editing response, particularly in early attack scenes that call for victims to be dragged through stained glass windows or grills in the hole, 'Lurking 'Fear', from the H.P. Lovecraft short title of pretty much the same title, is actually more focused than you would initially take from it. There will always be those that attest a film will never ever reach the source material's bull's eye, that its essence is all but gassed away as soon as filming begins (why watch them, others like me can't help but wonder), but even if this is true here, I can easily take the film on its own terms. Admittedly the introduction to set up the wonderful Ashley Laurence (in this a dead ringer for a kick-ass ninja Winona Ryder once she's free of the bookish sensitive nerd she begins as) and her reason for morphing into a hard but decent Lara Croft before there was a Lara Croft is almost lifeless, and less than impacting: blame the utterly clueless woman playing her sister, whose inability to react credibly to her mortal countdown in any way that an actual actress should, and you'll be thanking God she dies within minutes-I was about to do it myself. Up against Ashley Laurence, her deficiencies are unpardonable. May she make better grave fodder, and something has done her baby (if it's hers, what man would touch her unless stoned up past the Gods, thinking she was Ashley) and us no end of good, but it then becomes a harbouring spore for later release when another woman, younger this time, with barely more acting ability, takes her place.

As this was one of the last horrors made before the slasher boom was regretfully recreated for the late 90s, with even worse fashions to follow which continue to this day (and past it), and a H.P. Lovecraft short tome, there's no teen cast quota to fill, so the scenario and its characters slot intriguingly into place. Though Stuart Gordon, primarily wanting to film this himself either gave up or was pushed out, is not around, thankfully Jeffrey Combs is, and when I saw this so long ago, I didn't even know the man, and it's great to have him here, not least cos my fave Stuart Gordon film of all actually prevailed without him, and worked brilliantly too, though a Combs-free Gordon film is still a shock. And in this he's a doctor yet again, a fact he comments on in the making of. He's here with returning one-girl commando Ashley who wants to gut the cemetery and existing church with dynamite, in revenge for the mercy killing of her idiot sister and to save the town from a subterranean race of manic beast/wight-like beings, fleshy but non-human, who rise on stormy nights without compunction to seize, kill and eat whatever they can. The priest himself doesn't like this idea, spouting much religious pyschobabble, but he knows a force when he sees it, and he's about to face a few more.

He can worry little about a returning man, who narrates bit-parts of the story, and has finally exited jail on a wronged charge, and now wants to dig into the graveyard for the legacy his dad left him:a corpse a mortician pal of his (the late Vincent Schiavelli) told him is stuffed with a hefty sum of dollar bills (cheers, dad, least you could do, what with me languishing away for five years of hell for what exactly!), but isn't told of the psychotic nutter, who once partnered his father through years of grand larceny, in hot pursuit (Jon Finch in wonderfully funny camp but nasty Brit cockney geezer gangsta mode, yes him from 'Death On The Nile')and his two cohorts, the female being a dry-witted and mean-spirited flirt with heavy dashes of Sharon Stone in her 'Basic Instinct'/'Sliver' persona with a the sharp moves of Cynthia Rothrock, and Allison Mackee may start the film uneasily, but grows increasingly funny and forceful as the film exudes forth. A martial-art mud-fight with Ashley Laurence later on should excite a fair few viewers too, but don't expect too erotic or detailed, leave that to your filthy mind.

When they all meet up at the church, it's just lighter fluid awaiting a light, and while they glare at each other, hurling accusations back and forth, convinced they're all after the same thing, yet all the while ferocious creatures are waiting just underneath the poorly boarded up hole in the church floor they're all standing around. No, I can't truly say this film is filled with frights, tension, gore and bloodshed, but I don't feel it needs to be. The creatures, when seen, are actually quite brilliant, a perfect lamination of what undead should truly look like, where it weren't for the Hollywood idea of just diseased people acting weirdly dumber than usual. There's one present on the front cover, unlike the lousy charm-free dull choice for UK release, courtesy of 88 films, where the usual depiction of an old house (nothing to do with the film) is shown, it could be anything, like their usual 'Dead Souls' kind of trash. And trash is the only film advertised on this edition as trailers, all embarrassing killer toy stuff that couldn't even share a takeaway box with Chucky, never mind Gordon's classic 'Dolls'.

Full Moon Streaming don't seem to have much to offer at all, but should be applauded for making this low-budget little wonder lurking free, and a bit more affordable than when it usually turns up. Word of interest: though it's advertised as Region 1, this is actually a region free disc that will play on anything, making it even more valuable. Picture restoration is okay, sound quality less so, but there is a spare but fun featurette to accompany it which horror fans should find more inviting than not. Hey, it's better than a vanilla disc, look at what 'The Relic', 'Mimic' and 'The Faculty' still to this day exhibit on extras-i.e nothing! Bizarrely it's not mentioned on the back as an extra, not my first film to do this, as 'Horrible Bosses' does it too. At between £5-£7 pound, it's easily worth it, I liked it more than I did a year ago and it zips along nicely as a companion piece to the same years's 'Castle Freak', actually directed by Gordon, who probably did that when he couldn't do this, and you do get Jeff Combs in both. Both these make 1994 a damn sight better than being just remembered for nothing aside from an appalling and utterly passe "sequel" to 'Pumpkinhead' and a terrible first foray into horror for Neve Campbell called 'The Dark'. And any film that transforms Ashley from a bookish dumb-sister suffering recluse into a ball-breaking, high-kicking tough-girl with heart, with an instant command of any situation (you do wonder how anyone else here would get on without her) deserves ownership for that alone. Just be grateful you get more breaks than her, Winona, which, otherwise, would be a hugely Lurking Fear.
2 people found this helpful

SDXReviewed in the United Kingdom on 15 February 2015
3.0 out of 5 stars
"..CHEAP BUT FUN 80'S HORROR.."
Verified purchase
From 1994 a cheap low budget monster horror from full moon pictures, the story here basically is an ex-con goes to a small town cemetery to dig up a body full of cash only to discover its deserted and takes refuge in a small church with a handful of survivors, he soon learns the shocking tale of creatures that live underground feasting on human flesh, its pretty entertaining for most part with some cool creature effects and old school mild gore and blood, the cast is good with great roles from Jeffrey combs (Re-Animator) and Ashley Lawrence (Hellraiser) the film is slightly slow at times which is not good for such a low run time, its one of Lovecraft's less interesting stories but still worth checking out as 88 films have now finally made it available to see, worth picking up cheap if you like full moon's work.

The DVD picture quality is not great its very VHS in places
Features include a short behind the scenes which is certainly better than nothing.
Reversible sleeve with the original 90's cool artwork which is much better!
Region free 0, Run time is 1hr-13mins, 1994.
2 people found this helpful

ArnieleecarterReviewed in the United Kingdom on 06 February 2017
3.0 out of 5 stars
Three Stars
Verified purchase
ok ish

The Movie GuyReviewed in the United Kingdom on 21 December 2013
3.0 out of 5 stars
JUST LET THE WEAPON DO THE WORK
Demonic type creatures live underground at Leffert's Corners. They like to come out on Christmas eve as our human hunters prepare a surprise from them at the church cemetery. Meanwhile some bad guy grave robbers are looking for buried money. The two clash, in what becomes a three way fight.

You don't get to see the Creepshow looking creatures until near the end. Until then it was just arms reaching out. The scare factor was hit and miss. Short film with little to no character build up.

3 stars because it didn't completely suck and was based on an H.P. Lovecraft short story. Part of a 30 Horror Film Collection.

Parental Guide: F-bomb. No sex or nudity.
One person found this helpful

Darren WareReviewed in the United Kingdom on 16 August 2020
3.0 out of 5 stars
A strangely enjoyable film
This will play better to those with an already fond memory of the film.
It's a fun film with some not so great acting.... And yet I found it still enjoyable. I would say this would make a great film with a group of friends.
See all reviews
Back to top
Get to Know Us
Make Money with Us
Amazon Payment Methods
Let Us Help You
© 1996-2022, Amazon.com, Inc. or its affiliates