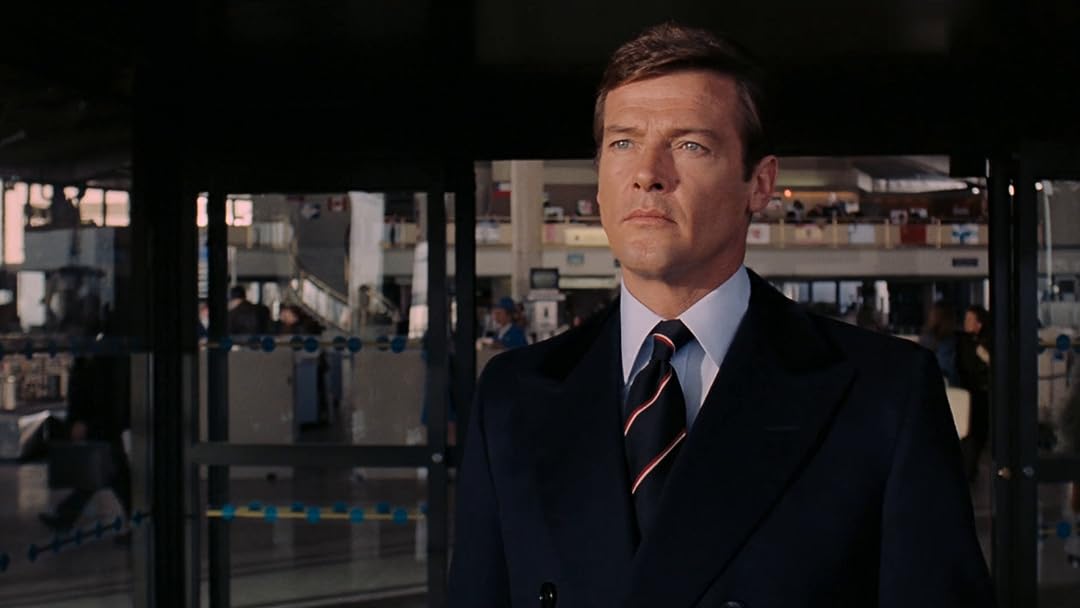 Amazon CustomerReviewed in the United Kingdom on 04 August 2022
5.0 out of 5 stars
Classic Bond, James Bond
Verified purchase
It's James Bond, what is there to dislike?

VictorReviewed in the United Kingdom on 26 August 2010
4.0 out of 5 stars
Live And Let Die, 2006 double disc Ultimate Edition - Entertaining romp as a new Bond stamps his style on the role
Verified purchase
Sean Connery finally said goodbye to Bond, the character that had made him famous, with `diamonds are forever'. So for Bond's eighth big screen outing we were introduced to Roger Moore (and his eyebrow) in the lead, the third actor to play the part on the silver screen.

Known for his roles in Ivanhoe and The Saint, Moore was a good choice. He had the on screen presence and mannerisms to carry it off, but was no Connery clone His Bond was just different enough to Connery to stand out, and it is this attempt to be different that was the secret of his success in the role. Moore's Bond seemed a more human construct, slightly less remote and dangerous but still ruthless when it comes to getting the job done.

In this film Bond is sent to America in order to sort out some drug smugglers. Along the way we have fun as we see the typical Englishman deal with the mean streets of Harlem, there is the excellently staged and thrilling bug boat chase through the Florida everglades, and the immortal stunt with the crocodiles. Into the mix there is a large dose of voodoo, and it sometimes seems that Bond's antagonists are not of this world. After the almost embarrassing attempt to be hip with the last film, the producers got it largely right this time, and largely because of the change of actor the humour and seventies fashions work a lot better.

There are notable performances: Yaphett Koto as the villain - a very underrated actor Koto gave this role his all and made a memorable Mr. Big, and Jane Seymour as Solitaire, the voodoo priestess who finds the tarot cards stacked against her... There is also an excellent score featuring Wings, it is up there with any of Shirley Bassey's themes for the series and fits the mood and style of the film to a tee.

It is a film which is full of atmosphere, entertaining in terms of thrills and humour and a great way to pass a couple of hours.

Notable in the Bond canon that it is the second film not to feature Q, and Bond carries a Magnum rather than the usual Walther PPK.

This ultimate edition really is the best version of the film I have owned. The picture has been lovingly restored and cleaned up, and looks amazing. Really, I am not just saying that. It looks superb. The sound has been similarly treated and there is an option to listen to it in 5.1 DTS surround, which is truly exceptional.

As well as the superb presentation of the film, there is also a host of extras, original trailers, informative audio commentaries and the such. These are exhaustive and some of them quite interesting. But these really a garnish for the main course, which is the film itself. This is an excellent release, and does the film justice. This series of `Ultimate editions' really sets the standard for film releases. It really does not get any better.

Mr. Stephen KennedyReviewed in the United Kingdom on 18 September 2007
3.0 out of 5 stars
Less is Moore...?
Verified purchase
Moore's first movie successfully makes the transition into 70's, with flares, jazz, afro's and all, intact. It's an extension of the Americanisation that started in Diamonds are Forever, and a lot of it works - at least well enough to establish Roger Moore as the new Bond quite painlessly. His is a different Bond - more suave, less fisticuffs, more one liners. But the story lurches from new ideas to old standards in hesitant fashion, ultimately ending unsatisfyingly.
There are some very memorable set-pieces, but there is a lot missing from the mix too. The plot line meanders and never seems to present a particularly threatening atmosphere. SPECTRE and Blofeld are rather missed, as the franchise struggles to find a replacement protagonist for the new decade. After megalomaniacs trying to achieve world domination, a drugs baron (Mr Big, played by Yaphett Koto) somehow seems tame by comparison.
Moore is often criticised for bringing too much levity to the series - but the one liners roll easily from his tongue (amazingly, given how firmly entrenched it is in his cheek). However, for every plus in the humour stakes, something is lost in the action stakes - Moore was never convincing in the running and fighting. The final train compartment fight in the coda is ok, but pales compared to the classic similar scene in `From Russia...' In this movie, although older than Sean Connery, with careful editing, he just about holds his own as a credible action hero.
It is over half way through the movie as your eyelids may be drooping, that the movie really kicks into gear, with `that' boat chase. It's action packed, with great stunts and humour throughout, in large part due to Sheriff W Pepper. Other than the colourful Sheriff, in terms of characters, women are given a bit of a bum deal, either whimpering Jane Seymour falling instantly for Bond's charms thanks to a rather ungentlemanly piece of cheating, or Rosie Carver who is portrayed as the most useless CIA agent ever (although Bond gamely offers to `lick her into shape'). Yaphet Koto however is a credible Bond villain- even when he cannot decide whether to be something from a Blaxploitation movie, or the Blofeld clone he sounds like in the final few scenes of the movie, in the inevitable underground lair.
It is this switch from high octane powerboat chase to disappointingly old fashioned finale, that ultimately lets the film down.

For this ultimate edition, the usual professional job has been done in restoring both picture and sound, with the dts mix being near flawless and never too clver, and the picture just perfect. All the extras from the Special Edition are present, with just a couple more - this time, an interesting curio - an excerpt from a 1964 comedy sketch where Moore plays Bond! Also a vintage but quite well done 1973 vintage documentary. The original `Inside Live and Let Die' and the feature commentary are still the must see highlights.
As a package then, good enough to introduce a new Bond, while Moore was still young enough to fill Bond's shoes. It has scenes worth waiting for, but is certainly not one of Bond's finest moments.
2 people found this helpful

Matthew MercyReviewed in the United Kingdom on 28 June 2009
4.0 out of 5 stars
Premium Bond No. 5
Verified purchase
Roger Moore's debut in the role of James Bond is a pleasingly dated Blaxploitation pastiche, which, though it has not aged particularly well, still endures as an entertainingly oddball 1970s' crime thriller. The great Yaphet Kotto (Across 110th Street, Alien) makes a terrific villain, whilst the debuting Jane Seymour is gorgeous as Solitaire, even if her acting isn't always brilliant. Making it five-for-five, the character of Felix Leiter is re-cast yet again, this time in the form of David Hedison, star of 1958's The Fly, and Julius W. Harris' Tee-Hee is a great henchman, up there with Oddjob and Jaws in the menace stakes. Unlike later efforts in the series, this film wasn't written with Moore in mind, and the effect of taking the urbane Englishman totally out of his natural comfort zone adds immeasurably to the film's impact. The alligator farm sequence and resulting speedboat chase are two of the series' most famous scenes, and Paul McCartney's theme song is possibly the very best written for a Bond movie. This film really is a product of its time, and not just in terms of the fashions and music; you'd never have a PG-rated movie that dealt with heroin trafficking and black magic given the green light by a major studio these days.
Another strong selection of `Ultimate Edition' DVD extras is featured here. Again we have the Patrick Macnee-narrated documentary as the main point of interest, but the award for oddest special feature must go to the clip of Moore (then the star of TV's The Saint) bizarrely messing around as a spoof version of 007 in a sketch from the `Mainly Millicent' TV show in 1964. As you would expect of a showcase for the `comedy skills' of Millicent Martin (who almost single-handedly derailed the later seasons of Frasier with her excruciating performance as Daphne's horrendous mother), the sketch is about as funny as accidentally cutting your toes off with a garden spade.
One person found this helpful

stephen brian morganReviewed in the United Kingdom on 26 July 2021
4.0 out of 5 stars
Worth the watch
Verified purchase
Roger Moore is no Sean Connery, but it's a well made film with a good story line.

coraReviewed in the United Kingdom on 30 March 2019
5.0 out of 5 stars
Roger Moore's First Outing as Bond
Verified purchase
This is actually quite a decent Bond flick. When this was made in 1973, Roger Moore was still young and handsome and made for an attractive new Bond after Connery's departure from the franchise. The story set in and around New Orleans and on a fictitious Caribbean island is intense and quite dark and the humour which has become a trademark of the Moore era is still rather restrained. While the irate Sheriff is huge fun, he does not distract from the spectacular speed boat chase. I personally really enjoyed the imaginative voodoo scenes, but for young or sensitive viewers these may be disturbing. Also worth mentioning is the theme song by Paul McCartney, one of the best in the entire series.

One word of warning: This is very much a product of its time (the early 1970s) and if you're looking for political correctness, stay away from this film. It does feature instances of racism and blaxploitation. Then again, if you're big on political correctness, you should probably stay away from Bond altogether - the films, the books, the character.
4 people found this helpful

JSJ2708Reviewed in the United Kingdom on 28 December 2021
5.0 out of 5 stars
great film
Verified purchase
great film

JohnReviewed in the United Kingdom on 03 April 2019
3.0 out of 5 stars
One of the worst Bonds
Verified purchase
The film has some redeeming features: the music is good and helps maintain a simmering of suspense throughout the film, Tee Hee is a great villain, and some parts of the film are also quite humorous. The scene in the lead up to the climax with the crocodiles is a fantastic sequence. However, Bond lost its way with this film due to the supernatural / magic ideas being taken too far, and not really appropriate for this type of film, for instance, the immortality of Baron Samedi. The bizarre demise of Kananga (where he swallows a pressurised bullet) helps mar the climax of the film and is one of the worst clangers of any Bond film. The boat chase is also stymied by the awful presence of Sheriff Pepper. Therefore this film has one of the weakest climaxes of any Bond film: the stakes have never felt lower.
2 people found this helpful
See all reviews
Back to top
Get to Know Us
Make Money with Us
Amazon Payment Methods
Let Us Help You
© 1996-2022, Amazon.com, Inc. or its affiliates