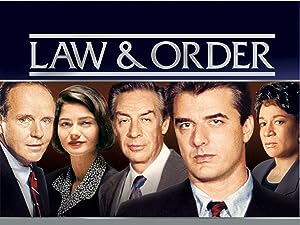 (150)
7.81994
Honored with over 50 Emmy nominations since its groundbreaking first season, Law & Order continues to excel at bringing powerful stories to a devoted television audience in Season 4.

R. J. KnightReviewed in the United Kingdom on 26 January 2011
5.0 out of 5 stars
TV Drama At Its Best
Verified purchase
This review of season four of 'Law And Order' could apply to any of the twenty it has managed to notch up. Over each forty odd minute episode it consistently delivers thought provoking, innovative, entertaining and realistic drama. You never quite know what you are going to get and which way the story will unfold. The key is in the excellent writing, production, directing and acting that is invested into each episode. Like a fair bit of American TV drama (Hawaii Five-O is a good example) the drama often unfolds initially as a montage of various scenes with their interconnectedness gradually revealed. It's a neat trick that, by virtue of making one wonder as to what is going on, draws you into the drama - you want to know what happens next.

TV acting is a special talent. Unlike in films, where individual scenes tend to build up to peaks and take days to film, the actor/actress needs to have an easy immediacy, an ability to start a scene, at a moment's notice, at the top of their game. It's why 'Law And Order' is a prime example of that type of TV Drama (some others being 'The Shield','The Wire' and 'Homicide:Life On The Street') that has an almost documentary feel. It's as though you are witnessing real events unfold for the first time. Like every season of 'Law And Order', this one benefits from some fine TV acting. There have been a few personnel changes, notably the indefatigable S. Epatha Merkerson coming in as Lieutenant Van Buren but Chris Noth, as Detective Mike Logan, still simmers, agitates and manages to rub people up the wrong way alongside his new partner, a character with 'made in New York' stamped all over it -Jerry Orbach's Detective Lennie Briscoe. Also, it's Michael Moriarty's last season as Executive Assistant District Attorney Ben Stone. Now no actor may do righteous indignation better than his replacement, Sam Waterston, but Michael Moriarty's Ben Stone, with his upright, considerate and finely tuned intelligence must certainly have set the tone and laid the foundations for the equally splendid and nuanced performances Sam Waterston brought to the role. It is possibly the case that virtually every recent American TV actor and actress has, at some point in their career, passed through the 'Law And Order' show, so an added bonus of this season, as with any, is spotting the familiar faces, often looking a lot younger, that have gone on to play major roles in later shows. The first episode of this season, for example, features Melissa Leo, who went on to gain prominence in 'Homicide:Life On The Street' and David Krumholtz of 'Numbers'.

The combination of good acting and writing delivers believable drama but there is something else that makes 'Law And Order' special. In the UK 'Law And order' is often scheduled alongside 'CSI New York' and this highlights another strength of the show - the use of real locations in and around the city its drama purports to take place in. With 'CSI New York', as with all the CSI shows, it is obvious that, apart from the scene setting aerial shots and a smattering of actual location shots in New York - or Las Vegas and Miami for that matter - most of the drama is taking place on sets and convenient nondescript locations in and around Los Angeles. Not so with 'Law And Order'. When they venture outdoors you are left in no doubt that the drama is really taking place on the streets of New York. There is no worry about getting the background to look vaguely like New York (and a few yellow cabs don't cut it) because there it is: the buildings, the streets, the signs, sidewalks, the wind, sky, clouds, sunshine, rain, sleet, snow, slush and ice are all genuine - right down to the red noses and visible breath of actors well wrapped up against the cold.

Dick Wolf, creator of 'Law and Order', said he wanted to create a 'great cop show' and that he has. This is a 'great cop show' which follows things through to the legal ramifications. It is peopled by realistic characters - somewhat world weary civil servants who, with a dash of sardonic humour, devote themselves to their jobs because, in some small way, they feel they can make a difference. TV drama doesn't get much better than this.

paul192Reviewed in the United Kingdom on 28 September 2021
5.0 out of 5 stars
Incredible
Verified purchase
Great series

justlovereadingReviewed in the United Kingdom on 25 July 2020
5.0 out of 5 stars
Fantastic programme
Verified purchase
Great to be watching this series from the beginning. Love all the characters and story-lines. A must see.

Theresa StarbuckReviewed in the United Kingdom on 14 February 2020
5.0 out of 5 stars
Brilliant
Verified purchase
These are classics - absolutely hours of good detective show for pence!!!!

joseph DelaneyReviewed in the United Kingdom on 10 August 2020
5.0 out of 5 stars
Brilliant
Verified purchase
Very good

Lee StaplesReviewed in the United Kingdom on 01 June 2020
5.0 out of 5 stars
Reliable
Verified purchase
Good service!
See all reviews
Back to top
Get to Know Us
Make Money with Us
Amazon Payment Methods
Let Us Help You
© 1996-2022, Amazon.com, Inc. or its affiliates