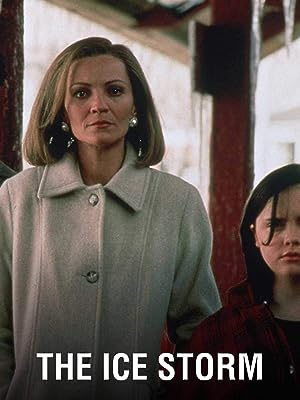 (220)
7.41 h 47 min1997NR
It’s November 1973 in New Canaan, Connecticut and the lives of a wealthy family are quietly falling into peril. As the teenagers surreptitiously experiment with drugs and alcohol and the adults drift into mate-swapping, a dangerous blanket of freezing rain begins to cover the town.

StevieLeedsUKReviewed in the United Kingdom on 04 June 2021
5.0 out of 5 stars
A under rated, over looked film
Verified purchase
I remember seeing this at the cinema and likes the film. It’s one of those films you can easily watch on a Sunday afternoon in the Autumn or Winter and it has two now very famous actors in it, who although very young in this acted really well. The kids behave just as dysfunctionally in a suburban setting, as do the adults. I think this is a clever film for what it is. Also I got this very fast from the company that sold it to me. You can’t get this in Blu Ray or you can’t get it at a price you would expect either, which is a pity, because the director is now a pretty famous director. This is a very over looked film that should be looked at more.
One person found this helpful

KaleHawkwoodReviewed in the United Kingdom on 08 November 2011
5.0 out of 5 stars
Whips of ice
Verified purchase
This exquisite, bleakly raw, terribly sad film was directed in 1997 by the great Ang Lee, after Sense And Sensibility, and just before the brilliant Ride With The Devil. And what a cast it has, some of whom were fairly obscure or unknown back then. Christina Ricci, Tobey Maguire, Elijah Wood and Katie Holmes are all seen at their best in early roles, and there is also a telling cameo by Allison Janney - The West Wing`s immortal CJ Cregg.
It`s the early 70s, Nixon is still president by the skin of his lying teeth, and the well-heeled residents of suburban Connecticut are sleepwalking into affairs with their neighbours` wives and husbands, attending what would now be called swingers` parties, and virtually ignoring their dislocated, empty-eyed offspring. Welcome to the blank new `lost generation` of the soured American Dream.
Kevin Kline, all coiffed hair and blandly neat clothes, is married to flint-eyed Joan Allen (excellent as always) though their marriage is crawling half-heartedly onto the rocks. Kline drifts into a loveless affair with their friend Sigourney Weaver - a bravely cynical, passive portrayal of a bored femme fatale by this fine actress - while the various children of both couples have begun to experiment, innocently yet with a cool lack of emotion for the most part, with their physical stirrings.
Slowly but very surely (with Ang Lee one is invariably in safe cinematic hands) events spiral out of everyone`s control, leading to an almost casually depicted tragedy. The families are numbly united, no doubt a little wiser, and life, one is left to assume, goes on. It is a poignant, diffident denouement to what seems in hindsight something of a parable, though it never moralises, which is part of its strength and poetic truth. Life is hanging like one of the winter icicles, by a cold, transient thread, the future happiness of all concerned tentative at best.
The way the emotional and sexual lives of the parents are juxtaposed with those of the children is done with subtlety and tact, while sparing use is made of Mychael Danna`s suitably lean musical soundtrack. Certain images linger: the night train carrying home Tobey Maguire at a standstill in a winter `wonderland`, more like a ghost train from a Stephen King story (we`re in the right part of the world, too); Sigourney Weaver, after one too many meaningless adulteries, curled foetus-like half-in & half-out of her bed; city rich-kid Katie Holmes` drugged eyes before she passes out, the viewer fearful of how she will cope with whatever lies ahead; and the ominously long whip Weaver shoves at her son to `play with`, that is echoed much later, and much more ominously, in a jolting `whip` of electric wires...
This has been described as a comedy-drama, and in a way it is, but the comedy is mostly dark and chill, the drama close to Greek tragedy.
A very fine film, worth seeing more than once.

The DVD however is not great, it's a French language version - there is an alternative English language option but you can't turn off the French subtitles!
One person found this helpful

Ivan KinsmanReviewed in the United Kingdom on 03 March 2013
5.0 out of 5 stars
Excellent cast and plot
Verified purchase
I remember first watching this film when I was working in the US, living in New York at the time. Keven Kline and Sigourney Weaver are both excellent as the rather dysfunctional husband and wife team and the actor playing their son, who is upset by his parent's quarrels, does a good job at portraying the emotion turmoil a young teenager can experience in such a situation. The film is also very reflective of the social era it portrays - the rather loose sexual mores, the wife swapping parties, the heavy drinking - and so should be seen for this alone. Also of note are the incredible ice storm scenes and the tragic scene that this brings about in the couple's life.

TangerineReviewed in the United Kingdom on 12 September 2007
5.0 out of 5 stars
A moving and fantastic film
Verified purchase
This film is a must have for anyones collection. Wonderfully directed by Ang Lee this film depicts America in the 1970's and its sexual liberation. Sigourny Weaver and Kevin Kline play neighbours having an affair. Whilst their marriages are clearly on the ropes their children are mixed up too indulging in 'games' that are a little too grown up for them. The Ice Storm comes and with it an event that changes everyones lives and provides an opportunity to reflect on what they have all become. This is a film that tells a story in an adult way. It doesnt dumb it down to cater for the masses. Its moving, intense and above all powerful. Add this to your collection now!
One person found this helpful

Amazon CustomerReviewed in the United Kingdom on 30 April 2018
4.0 out of 5 stars
Interesting story
Verified purchase
A good story well presented. Good acting, even by the younger actors/actresses, especially Christine Ricci.

Jaime SilvelaReviewed in the United Kingdom on 27 May 2013
3.0 out of 5 stars
Great film, bad DVD quality
Verified purchase
I'm a fan of Ang Lee, and I think this is one of his best films.
But I'm very disappointed with the quality of the DVD. It's advertised as widescreen, with a 1.85:1 aspect ratio, but is actually a full-screen (4/3) aspect ratio, with black horizontal bars to frame the picture. Way to trow away resolution!

This is not the first time I see this trick in a DVD from CANAL+ IMAGE. I hope they get their act together.
Meanwhile, you can enjoy this classic despite the flawed transfer, or pick up the Criterion Collection edition if you can watch Region 1 discs.
3 people found this helpful