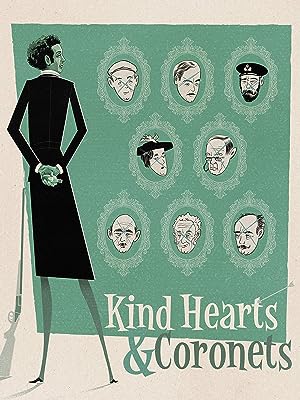 (948)
1 h 46 min1950X-RayUHD
June 2019 marks the 70th anniversary of the original UK release of KIND HEARTS & CORONETS, the jewel in Ealing Studios' crown, and arguably one of the finest British films ever made. To celebrate this anniversary STUDIOCANAL are releasing a stunning restoration on June 24th 2019.

BM2662Reviewed in the United Kingdom on 06 August 2019
5.0 out of 5 stars
A sublime movie with a beautiful blu ray remaster
Verified purchase
I already have this movie on bluray but I simply couldn't resist buying this new remaster
PQ is sublime and befitting a movie of this supreme quality
Dennis Price is, for me, the star of this movie. What a pity his alcoholism totally ruined his career.
The package is excellent but I woukd rather pay less and have a basic package with just the case and cover. I consider such things as postcards and posters to be a complete waste of money.
I managed to buy this anniversary edition on amazon at a bargain price otherwise I would not have paid the full price.
This is a perfect movie with a beautiful picture that looks even better when upscaled to 4K

DRReviewed in the United Kingdom on 10 August 2019
5.0 out of 5 stars
A Blu-ray Masterpiece
Verified purchase
Having seen this film many times I was amazed by the picture quality it's hard to believe it was made 70 years ago and the extra's give the viewer an insight into the making of this great film I was torn as to which copy to purchase the box set which retails at £25.00 or the copy I purchased for £14.99 as I didn't think it was worth paying an additional £10.00 for a booklet, art cards and a poster but that's up to the individual to make that choice as everything else is on both copies anyway watch and enjoy.
7 people found this helpful

ErehwonReviewed in the United Kingdom on 22 November 2021
5.0 out of 5 stars
An absolute masterpiece
Verified purchase
In his other famous opus released two years later, “The Leopard”, Visconti will describe the decline of the Sicilian nobility, replaced by an affairist and trivial bourgeoisie. Here, closer to Vittorio de Sica, he is interested in the misery of the people of the Mezzogiorno in the post-war period. Fundamentally rooted in Italian neo-realism, “Rocco and His Brothers” tells an extraordinary family tragedy – reminiscent in some aspects of Coppola’s “The Godfather” – against the backdrop of a rural exodus of a family from southern Italy to the lure of the Lombard capital. This long fresco tells us about the difficulties faced by the members of this family of immigrants from the interior who have fled Basilicata and the psychological changes this causes in them.

The starting point of the story is relatively simple: To escape poverty, a widow and four of her five sons move to Milan, where the fifth has just got engaged to Ginetta (Claudia Cardinale), a middle-class girl. They plan to be accommodated by the in-laws, who refuse for lack of space. They end up in a slum, in the basement of an ABR building.

All the brothers are looking for work: Simone (excellent Renato Salvatori), Rocco (Alain Delon, touched by grace), Ciro and Luca (both more discreet). Simone becomes a boxer at the local club and aims for a professional career. He falls in love with Nadia (bright Annie Girardot), a 25-year-old prostitute who will never love him. She will finally fall in love with his brother Rocco, the same one who will be much more skillful with gloves in hand on the ring, leading Simone, jealous, into a black rage. But Rocco refuses any confrontation with his brother. As such, a terrible scene censored and reintegrated into this new version is the turning point of the film.

However, to reduce “Rocco and his brothers” to this opposition between the two brothers would be to ignore Visconti’s cinematographic mastery. Thus, through the prism of this a priori Manichaean history, the director explores a plurality of social and political themes: the uprooting of a family from the south to the north of Italy, the living conditions of the industrial proletariat, the ambition, family honour and the hope of social elevation. A landscape of violence where the infinite tenderness of one and the bestial brutality of the other are opposed. Failed boxer, unhappy lover, Simone sinks into delinquency and crime: theft, rape, prostitution and murder.

Every time, Rocco covers him and pays for him. In the end, he’s as guilty as his brother. Doesn’t he shout it himself at the end?

Ciro sums up the essential theme of the film’s morality when he explains to Luca that Rocco is a saint, that he forgives everything, always, and that’s exactly what he shouldn’t have done with Simone. I totally share Ciro’s point of view: Rocco is as guilty as Simone, both are linked in the tragedy. Wherever and at all times, in the face of repeated and more and more brutal criminality, forgiveness and tolerance are not the answer; they only make things worse. A lesson that is still on today.
One person found this helpful

ZarinaReviewed in the United Kingdom on 08 November 2021
5.0 out of 5 stars
Wonderful old classic
Verified purchase
This classic Ealing comedy never seems to be available for streaming, but it is a masterpiece, and it’s well worth spending a few pounds on a dvd. A nice copy - just the movie, no fancy extras, but I didn’t mind, the film is enough.

.... and what a film. Is it wrong that I want Dennis Price to triumph?
He plays the main character (Louis D'Ascoyne Mazzini), and he is NOT a conventional hero. We see his attempt to become a duke by murdering everyone before him in the line of succession - and (shock/horror) I WANT him to succeed. I like him. He is charming, funny, and attractive, and he has a sympathetic motive. His horrible, uncaring upper class relatives have treated him disgracefully - disowning his beloved mother, who married one of the “lower classes” for love, refusing to acknowledge his existence, even denying his poor mother her final resting place in the family vault.

So, yes, I know it’s not exactly conventional to be on the side of a serial killer, but I can’t help it - it’s ironic, hilarious, and in this suspension of disbelief, it seems so right. Go, Dennis! (Sorry, I mean go, Louis) Claim your birthright! Kill Alec Guinness, if that what you must do.
Actually, you need to kill him quite a few times, because he plays every other member of the D'Ascoyne family - and he does it brilliantly. Yes, Dennis Price plays the wronged evil protagonist (and his opera singing father) to perfection, but he is still upstaged by Alec Guinness in every scene. Forget about Dick Emery or Harry Enfield - Guinness was the original man of many faces. He plays nine different D'Ascoynes to perfection - be it funny, snobbish, affable, energetic, crusading - he plays them all, including one woman. He is the mainstay of the film, and the reason it is still watched and beloved over 70 years after its release. (70 years? Seriously? That is some achievement)

.... so we enjoy watching Dennis Price kill Alec Guinness multiple times and (spoiler alert) achieving his objective, so much so, that it’s almost disappointing when we applaud his success, then realise that there are no more Alec Guinesses left to kill, and we are going to have to watch the rest of the film without him. 🙁 It ends well - ironically, humorously, brilliantly; leaving us wondering whether Price will get away with it or not, BUT I still found myself looking for Alec Guinness - could he be playing another cameo?
Sadly not, but a truly great film nonetheless.

Michael Paul SmithReviewed in the United Kingdom on 14 April 2021
5.0 out of 5 stars
A Must-See Classic
Verified purchase
Although Alec Guinness plays about eight parts in this wonderful film, for me it's Denis Price who is the star. No spoilers here, just the heartiest recommendation to anyone who loves classic cinema, especially in the UK. This counts as one of my favourite movies ever made, and I don't say that lightly! Brilliant performances by. the whole cast but I think you'll come away from it remembering Price with great affection. The very best of British!
One person found this helpful

Mr. Brian J. HarrisReviewed in the United Kingdom on 02 November 2015
5.0 out of 5 stars
Want a classic? Here's one.
Verified purchase
Not only is this Black Comedy by far the best of the classic Ealing Comedies but it would probably rate as one of the top ten British films of all time in any genre.

The impeccable Dennis Price plays an Anglo-Italian commoner who, through regrettable circumstances, feels he has been cheated out of this birthright to become a Duke. When his dear mother is killed as a result of a road accident he plans to bump off the people ahead of him in the line of succession. All seven of those people, including one lady, as well as the current Duke all being played beautifully by Alec Guinness.

This film, like many fine comedies, is one of those that can be seen again and again without any diminution of interest and joy.

In these days of films being churned out seemingly every five minutes it is very refreshing to see a crafted film that will remembered a very long time.

I thoroughly recommend this film to those to cherish a good Comedy.
11 people found this helpful

Jack D RipperReviewed in the United Kingdom on 12 May 2017
5.0 out of 5 stars
Great Film
Verified purchase
If you like this film get the DVD. They certainly don't make them like this any more, witty, intelligent, no CGI, no car chases etc. One of the best films ever made.
13 people found this helpful

William Grimke-DraytonReviewed in the United Kingdom on 15 August 2019
1.0 out of 5 stars
A reassessment of what was once an old favourite!
Verified purchase
Unfortunately the film suffered from being so outdated. References to "natives in Matabeleland" and the use of the n- word liberally at the end of the film meant that I had no choice but to delete film from my video library. I know that a caption was shown on the screen before the film started. However, it stated that some "may be" NOT all will be offended by aspects of the content of the film. It was not worth remastering this relic of a bygone age. It belongs in the dustbin. It is a pity because Alec Guinness was an accomplished actor as to Dennis Price. I hope I've got the latter's name right.
4 people found this helpful
See all reviews
Back to top
Get to Know Us
Make Money with Us
Amazon Payment Methods
Let Us Help You
© 1996-2022, Amazon.com, Inc. or its affiliates