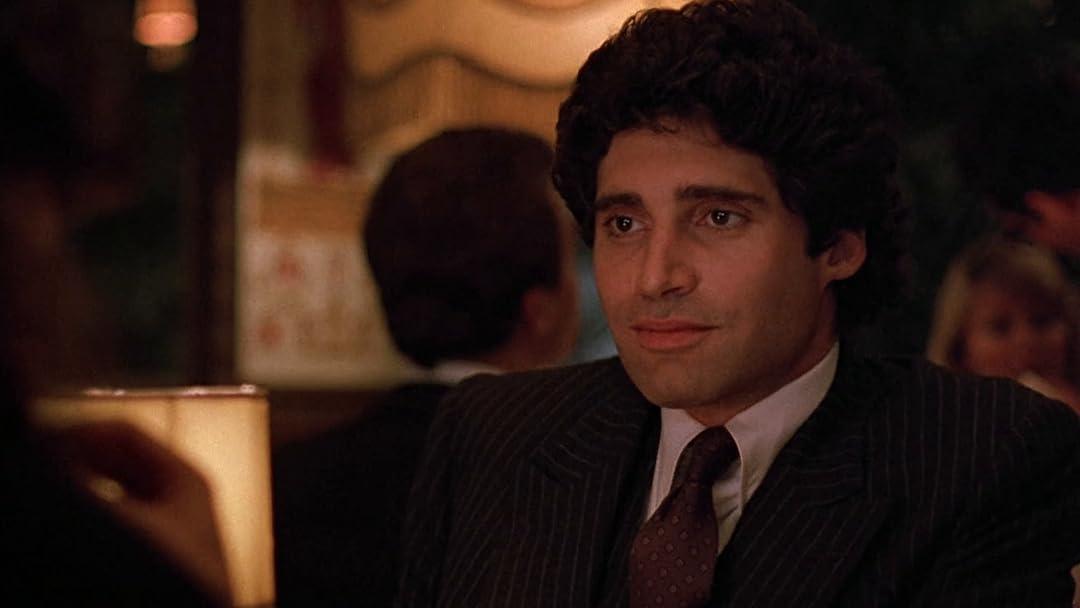 (2,952)
1 h 34 min1983X-Ray
Jennifer Beals stars as Alex Owens, a Pittsburgh steel-mill welder by day, and bar dancer by night. Harboring dreams of a career in ballet, she is given financial support in this endeavor by her boss Nick Hurley (Michael Nouri) and moral support by demanding but big-hearted instructor Hanna Long (Lilia Skala).

Patrick D. CareyReviewed in the United Kingdom on 14 April 2021
1.0 out of 5 stars
Product placement?
Verified purchase
Isn’t it product placement when something appears on television or in a film that influences you to buy it? Well I’ve watched ‘the Internship’ numerous times on Amazon Prime (free of charge), and because I quite liked it i bought this (a film constantly m”referred to throughout that movie). I should have saved my £11.99. This film is absolute bilge. It plays on the attractiveness of its female lead (Jennifer Beals) and is very short of quality acting and storyline. It consists of scenes showing Beals buttocks as she twists and turns in the gym with her two friends as they work out, and other scenes where she dances provocatively at a local dive frequented by her steelworker buddies. It’s a poor film. I should have gone for one of the other films I’ve had in my Amazon shopping basket for some time.
4 people found this helpful

Tracey D. PorterReviewed in the United Kingdom on 22 January 2016
5.0 out of 5 stars
What is there not to like?
Verified purchase
Of all the 'girly' films I enjoyed in the 70s and 80s (Grease, Saturday Night Fever, Dirty Dancing, an officer and a gentleman, pretty woman etc) this is the one that stands the test of time and stands above the rest (though I still love Dirty Dancing and pretty woman!). But this film stands out still.

A cracking sound track which is stil easy to listen to today.

The gorgeous Jennifer Beale who I aspired to be when I first watched it. Her characters innocence and personal ethics and morality spoke volumes to me then and still does today.

The storyline, basically a Cinderella story with a kick ass Cinderella and a prince who is real with flaws and all.

This film is about a working girl (as a welder! Not a prostitute!) who aspires to attend a dance school. By day a welder, by night a dancer in a shady club. The film shows her relationships with her boss, her friends, her elderly dance teacher and charts her journey to realise her aspirations.

A lovely film which will make you laugh and cry. Perfect!

I was 13 when I saw this in the cinema and I still love it 33 years later.

Mr. Steven ClarkReviewed in the United Kingdom on 15 October 2013
5.0 out of 5 stars
Flashdance Blu-ray "What a feeling"
Verified purchase
Paramount have finally released Flashdance on Blu-ray Region A and B,and what a fantastic upgrade from DVD.

Continuing the theme of contrasts, Lyne and cinematographer Don Peterman (Men in Black) shot a movie about artistic aspiration in the gritty urban style pioneered by Lyne's countryman Alan Parker for Fame (1980). Lyne then softened the imagery by dispersing smoke into the air in almost every shot such that, according to editor Bud Smith, there were always a few takes that couldn't be used because the actors were obscured. (Midway through production, the studio panicked and ordered that no more smoke be used, and Lyne posted an assistant to watch for the approach of any studio people, so that the smoke machine could be hidden before they arrived.) The result is an often soft, delicately colored image of a type that has gone almost entirely out of fashion in today's world of digital photography and post-production.

Paramount/Warner's 1080p, AVC-encoded Blu-ray is a superb rendition of Lyne's and Peterman's vision, as it was seen by audiences in 1983. The grain and texture of the imagery have been retained without diminishment, but they never become obtrusive (unless one is allergic to even a hint of grain). No attempt has been made to compensate for the original photography's softness with digital tools, which is the correct choice, because the image has fine detail that artificial sharpening or excessive contrast could easily overwhelm. Besides, Lyne and Peterman carefully designed Flashdance for visual contrast between the muted everyday world and the garishly "hyper-real" stage show at Mawby's, with its intense colors and bright lights. A Blu-ray treatment that failed to render both ends of this contrast accurately would not do justice to the film. This Blu-ray does.

Blacks are deep and accurate, and shadow detail is properly rendered in places where you're supposed to see it. Minutia of hair, faces, costumes and the rusting Pittsburgh cityscape are readily discernible, even if they don't pop off the screen in every scene (they're not supposed to). The average bitrate of 26.44 Mbps is sufficient for the rapid dancing scenes, primarily because there are more than a few episodes of simple, quiet conversations in between. In any case, I saw no compression artifacts.

Flashdance was released in Dolby Surround and has been remixed for 5.1, which is here presented in lossless DTS-HD MA 5.1. As is typical of Paramount's remixes, the approach is conservative and does not attempt to create gimmicky rear channel effects where none are warranted. The stereo separation in the original mix was often effective in placing sounds of such locations as the steel mill to the left or right of characters, and those effects have been preserved. Otherwise, the chief beneficiary of the lossless multi-channel treatment is the historic soundtrack. The songs sound airier and more "opened up" than I have ever heard them before, from the moment Irene Cara's voice comes in over the opening titles. The dialogue is occasionally overwhelmed by Giorgio Moroder's instrumental score, but this has always been the case with Flashdance. The sound mixers understood what was important, and dialogue took a backseat to the beat.

Paramount has released four DVD editions of Flashdance. The first in 2002 was featureless. A "special collector's edition" in 2007 added the array of features that have been ported over to this Blu-ray; that edition was reissued in 2010 (without the "special collector's edition" label) under the same cover used for the Blu-ray. In between, in 2009, Paramount re-released the featureless disc as part of their "I Love the 80s" series but included with it a limited edition CD of the soundtrack.

Note that all of the featurettes listed below are essentially part of the same documentary, cut up into segments.

The History of Flashdance (1080p; 1.78:1; 14:43): Lyne, Bruckheimer, associate producer Lynda Obst, Michael Nouri and actor Kyle T. Heffner (who played Richie the cook and aspiring comic) discuss the origin of the project, although there is reportedly much more to the story than they relate. For example, no mention is made of the involvement of other directors, although Brian De Palma was reportedly attached for a time, before leaving to make Scarface.

Flashdance: Music and Songs (1080p; 1.78:1; 6:14): Giorgio Moroder and music supervisor Phil Ramone are the key participants here. (Note that Bruckheimer says he always referred to the film as a musical.)

Releasing the Flashdance Phenomenon (1080p; 1.78:1; 8:53): Bruckheimer, Lyne and others discuss the film's release and its surprising success.

Trailer (1080p; 1.78:1; 1:58): The trailer is effective, and it includes some quick cuts of footage that did not make it into the final film. Unfortunately, no deleted scenes appear to have survived.

I don't know when Flashdance will be released in the U.K but their is no need to wait, buy this U.S version with confidence it plays on U.K players.
24 people found this helpful

keith eslerReviewed in the United Kingdom on 30 October 2019
5.0 out of 5 stars
Its My Favourite Film Iconic
Verified purchase
My Favourite Film So many Memories must of saw it 8 times in the cinema In 1983 Still weep as she arrives to tell her Friend Hannah she won the dance competition , only to find she had died When you hear the slow theme to the film Its just Class Luv it Luv it Luv it
4 people found this helpful

SandroReviewed in the United Kingdom on 22 October 2018
2.0 out of 5 stars
Starts Well but soon looses its way
Verified purchase
This is a classic case of style over substance; for the first 20 minutes at least it does everything right but the film then veers into a series of tedious MTV style video sequences and in the process forgets to tell a story. The two lead characters are underdeveloped and somewhat irascible and so you don’t really care all that much about them and the pace of the film is erratic and spotty and never really capitalizes on its potential. The only thing it really has on its side is Nostalgia and its soundtrack but as a film viewing experience its dull and uninvolving.
One person found this helpful

Belinda K.Reviewed in the United Kingdom on 24 April 2020
5.0 out of 5 stars
80's Version of Dirty Dancing Romance
Verified purchase
A poor US welder goes up against rich Ballerinas for a ballet recital, she gets the part.
Great soundtrack and suitable for those wanting to improve their language skills, accents are easy to follow and the language within the film is simple and easy to follow with or without subtitles.
Highly recomment this 80s US/UK Classic
2 people found this helpful

PatReviewed in the United Kingdom on 06 September 2011
5.0 out of 5 stars
Exciting!
Verified purchase
I really enjoyed this film. The special features are really interesting, telling us about the history of the making of it from the director's point of view. The film itself is both exciting and moving. The costumes and make up, along with the fantastic dance routines, are magnificent. Even though Jennifer Beals is not a trained dancer and the main dance, that wins the audition towards the end of the story, is made up of several different dancers, it is so well orchestrated and choreographed, you cannot tell that it is not her good self! other dances throughout the film are magnificent. Needless to say the soundtrack is brilliant. On the whole a great film, timeless and an inspiration to any generation. Well worth watching - this is definitely a film that Jennifer Beals fans must see!
5 people found this helpful

MagsReviewed in the United Kingdom on 13 February 2020
5.0 out of 5 stars
Happy Memories
Verified purchase
Arrived safe and sound and well packaged. Remember watching this years ago and wanted to revisit some very happy memories. Everything I expected, brilliant.
See all reviews
Back to top
Get to Know Us
Make Money with Us
Amazon Payment Methods
Let Us Help You
© 1996-2022, Amazon.com, Inc. or its affiliates