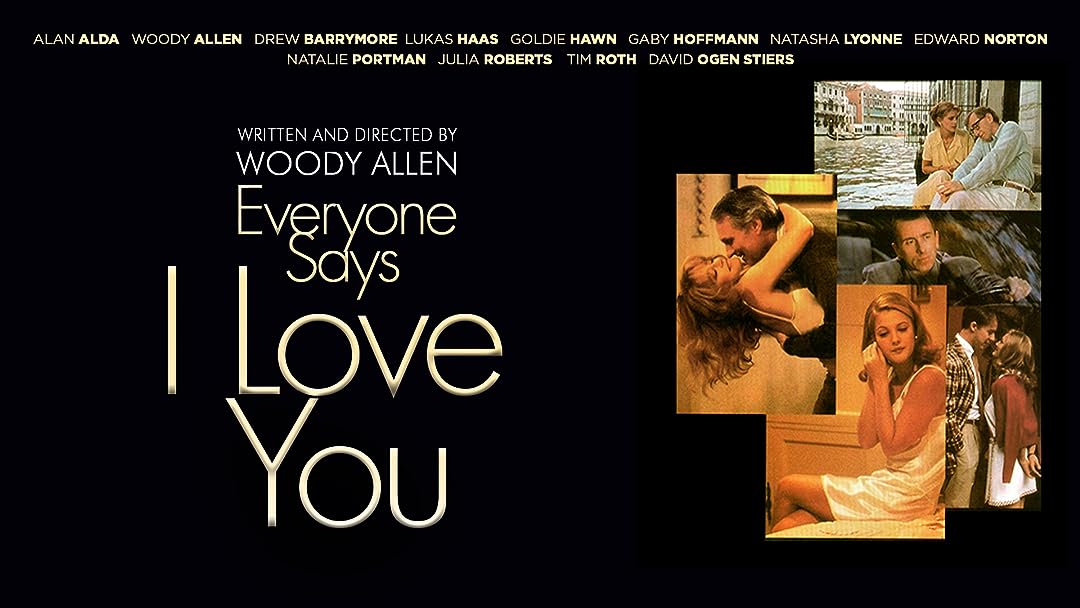 Everyone Says I Love You

(257)
1 h 41 min199713+
Expect to fall in love with Woody Allen's first musical, where wit and sophistication fuse in melodious harmony. With a star-studded cast, including, Julia Roberts, Drew Barrymore, Tim Roth, Goldie Hawn and Natalie Portman. Set in some of the world's most romantic cities, this whirlwind of intertwining tales, focuses on one family's search for love. A romantic comedy that is unmissable!

the countessReviewed in the United Kingdom on 25 December 2019
5.0 out of 5 stars
Throughly enjoyable
Verified purchase
Every scene is perfectly paced and economic . Wonderful casting, fantastic choreography, and classic songs from the American song book sung earnestly which made them far more moving then if they had been sung by straight singers ..I loved that it was actors singing rather than overblown singers with astounding range ,because the sentiment of those songs became something much more poignant and wonderfully human and not that modern over acrobatic singing where the emotion becomes totally obscured and is rendered sterile .There are just some feelings that can only be communicated in song and there is such a great understanding of this in this film ..after all who doesn't n imaginary soundtrack in their heads when they have fallen in love ? .The big questions of the meaning of love and life are treated with a frothy light delicate touch that is very easy to digest in that airy old Hollywood fantasy way of a great Ginger Rogers and Fred Astaire type musical comedy classic ,which somehow only proves to make them more haunting and crucial .This is the only film that i've seen that I actually enjoyed the use of special effects, when the grandfather jumps out of his coffin as a ghost and is accompanied by a chorus of ghosts dancing I was mesmerised and I was ,especially thrilled at the end sequence when ex husband Woody and wife Goldie dance by The Seine and Goldie Hawn becomes airborne .I was so impressed by the surprising quality of Goldie Hawn singing,I want to hear her sing again ,her phrasing and diction and delivery are really special , I thought she was incredible .Maybe because I love Old Hollywood musicals and I love movies that transport me ,I really loved this film .Woody Allen nails it in his own unique way ..Throughly enjoyable
One person found this helpful

J. McDonaldReviewed in the United Kingdom on 16 August 2016
5.0 out of 5 stars
Everyone Says I Love You.
Verified purchase
Woody Allen isn't the most consistent of film-makers - though he's always worth watching – and every now and again he comes up with a jewel like this one.

It's a risky format to pull off and I expect that not everyone cares for it, but this is a cleverly realised musical in which a host of stars - not noted for musical roles – burst into song in just about every scene.
Reminiscent of “Pennies From Heaven”, old songs from the great American songbook provide a narrative and backdrop to imaginative fantasy routines as the fine ensemble cast play out various strands of the complicated storylines involving her family members as they are narrated by the youngest daughter, DJ (Natasha Lyonne).
Allen as usual gently pokes fun at the middle-class, liberal America he himself is part of, sending-up the pretensions, relationships and social mores of this group of prosperous New Yorkers; the music is inspired with first-rate arrangements provided by jazzman Dick Hyman and an orchestra of top-rate musicians.
From a stellar cast, Goldie Hawn and Alan Alda are most impressive (in my personal opinion) but the whole film is a joy to watch – it is funny, entertaining and novel.
As usual with Allen's films there are no extras; the film is presented in 16 x 9 anamorphic widescreen and subtitles in English are available.

One of my favourite Woody Allen films, for a brief time hard to get at an affordable price, now widely available again on DVD.

Sebastian PalmerReviewed in the United Kingdom on 20 January 2016
4.0 out of 5 stars
Woody's oddball musical nougat: not to everyone's taste, but fun if you like that kind of thing!
Verified purchase
Love Woody Allen, but don't like musicals? That's pretty much my position. If you feel similarly, never fear, this isn't your normal musical. Trust Woody Allen to take a moribund form and have fun having his wicked way with it.

I recall first watching this film with some people who didn't like it all. They said it was a less than brilliant Woody Allen film with a load of schmaltzy songs sung pretty poorly by excellent actors who clearly weren't selected for vocal prowess. In some ways that's a perfectly valid and largely true analysis. But I find that, both in the context of Allen's larger oeuvre, or looked at in it's own right, Everyone Says I Love You is, whilst admittedly not Allen's greatest work, certainly a perfectly adequate (if workmanlike) confection. Above all it's simple silly fun.

But wait ... if that sounds like damning with faint praise, it's actually a fair bit more than that: it's also a celebration of that ol' razzle dazzle - not just of the 'golden age' of the American songbook, but also of the showbiz song 'n' dance routine. The dancing ghosts singing 'Enjoy Yourself' exemplify Allen's eccentric spin on the genre, and the trio of trick-or-treating kids doing a Latin American style banana song are priceless.

And, I think crucially, the fact that many of the excellent actors have merely reasonable voices gives this goofy musical a form of uniqueness and strength: I imagine practically all of us have a musical soundtrack to our lives, regardless of the 'pipes' we have or haven't got. We probably all have songs we like to sing to ourselves, songs we might even want to sing to the world in general, or perhaps someone in particular? Even if we aren't all great singers.

That kind of makes the occasionally wobbly deliveries - Allen's own is a case in point - that bit more poignant. And in this era of X-Factor and The Voice, not to mention in mainstream musicals generally, it seems a great deal of vocal talent is expended in sound that, whilst very professionally delivered, signifies less than nowt. Here the songs may frequently be silly, but they do at least say something.

Like Coppola's segment of New York Stories, there's something some viewers (me for one!) may find a bit icky about the super-rich milieu in which this film is set. Allen even suggests through his young female narrator character that the enchanted dreamlike quality of the story as a whole required that it be rendered as a musical; told straight no one would buy it! But ultimately Allen's films always have a richness of humanity, and his humour helps make it all palatable. Talking of humour, a recurrent Allen trope is to associate the American right wing with mental illness, something he riffs on here in the character of Lukas Haas, whose lapse into a phase of right wing ideology is ultimately revealed as being due to a lack of oxygen to the brain!

Alan Alda is solid in his role, whilst Goldie Hawn, Julia Roberts and Drew Barrymore are all drop dead gorgeous. Allen is his same old bad self, and there's an enjoyably silly cameo for Tim Roth, as a recently released convict Hawn takes under her liberal wing, with predictably farcical consequences. In a way this is just your typical Allen potboiler, in terms of familiar themes of shifting relationships, occasional musings on mortality, and plentiful laughs, ranging from the wittily urbane to the broad and farcical. It's just that in this instance he's chosen to treat the story as an oddball musical.

Not Allen's best by a long chalk. But don't be put off by the less than tip top vocals. Just enjoy it for what it is, an entertaining confection, laced with a nougat like selection of song, dance, wry humour, and lashings of fun.
3 people found this helpful

F A.Reviewed in the United Kingdom on 12 May 2020
4.0 out of 5 stars
Entertaining
Verified purchase
Even though, as usual, it is impossible to believe that somebody like Julia Roberts or Goldie Hawn would fall for somebody like Woody Allen, and that many people like me do not share his musical taste, he still has the comedic genius and the ability to create all kinds of twists and turns in his stories that keep you watching.

R. MorgenReviewed in the United Kingdom on 06 February 2021
5.0 out of 5 stars
It's the perfect musical
Verified purchase
Are they great singers? No (except Goldie Hawn). But we are swept away by this perfect parody of the great American musical. It is captivating. And the homage to Groucho is flawless. So much fun!

snooReviewed in the United Kingdom on 20 March 2021
4.0 out of 5 stars
Sweet
Verified purchase
Sweet, but unusual Woody Allen musical. Not quite Allen's usual format, and not quite a musical's usual format (with the actors, who are not singers, singing) but pleasant nevertheless.

Miland JoshiReviewed in the United Kingdom on 13 October 2007
5.0 out of 5 stars
Sheer entertainment
Verified purchase
I was pleasantly surprised by a film that can be compared to a perfect dessert, tasting good, yet not heavy. Only Woody Allen could take threads from the films of the 20th century going back to the 1930s and weave a musical cloth suitable for today. The plot can be best described as pleasantly gossipy (since the main narrator is a young woman), but that is only one ingredient in the mixture that includes colour, song and dance, a bit of magic (watch the sequence on the river bank in Paris) and even a bit of Bollywood (a section of a song sung in Hindi by a Sikh taxi driver).
Highly recommended for a pleasant, relaxing evening.
3 people found this helpful

Mr. Frank WestReviewed in the United Kingdom on 25 March 2010
4.0 out of 5 stars
Woody's homage to the Hollywood Musical
Verified purchase
You've got Woody Allen's neurosis and a raft of one liners; you've got Edward Norton singing to Drew Barrymore for heaven's sake! It's elegantly shot in Paris and Venice as well as NYC. It's got a believable plot and makes as good a use of the American song book as anything you're liable to see, although Woody doesn't quite match Marilyn in the beauty stakes there's nothing wrong with his rendering of 'I'm through with Love.' If that's not enough you've got Julia Roberts as well as Goldie Hawn. And if that's not enough you've got Alan Alda. And if it's still not enough you've got a real and magical surprise in final reel which you just have to see.
One person found this helpful
See all reviews
Back to top
Get to Know Us
Make Money with Us
Amazon Payment Methods
Let Us Help You
© 1996-2022, Amazon.com, Inc. or its affiliates