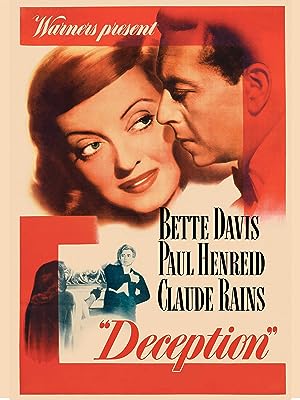 (45)
1 h 51 min1946
Bette Davis, Claude Rains and Paul Henreid star in this romantic mystery about a pianist who will stop at nothing to protect her refugee husband from her rich and powerful ex-lover.

ChrisReviewed in the United Kingdom on 17 April 2020
4.0 out of 5 stars
Well acted drama
Verified purchase
Brilliant ensemble playing from all the cast, well worth seeing.

Janette BlairReviewed in the United Kingdom on 28 May 2020
5.0 out of 5 stars
Special offers!
Verified purchase
I know this movie and love it

Mrs JL MarriottReviewed in the United Kingdom on 18 October 2017
5.0 out of 5 stars
Five Stars
Verified purchase
Brilliant film I love Bette Davis she's great in any of her films.

Jane LundReviewed in the United Kingdom on 05 May 2014
3.0 out of 5 stars
Deception
Verified purchase
Bette Davis and Claude Rains very good, but the storyline wasn't very good, it went on a bit not their usual type of film.

D J Jackson: Passionate about Film.Reviewed in the United Kingdom on 07 April 2021
4.0 out of 5 stars
CLAUDE RAINS UPSTAGES BETTE DAVIS IN 4½ STAR ‘NOIRISH’ MELODRAMA.
This is a review of the 2008 Region 2 DVD from Warner Home Video and Turner Entertainment. It is one of 6 Warner Brothers films, all digitally remastered, dating from 1939 to 1946, in the Box Set ‘Bette Davis: 100th Anniversary Collection’, which we purchased from Amazon. This film, the latest one from 1946, is in the original 1.33:1 and mono sound. It comes with a number of extras. The reproduction is very good indeed. The remastered picture is clear, blemish-free and richly black and white, the sound excellent.

In 1942, Bette Davis, Paul Henreid and Claude Rains starred together in the romantic drama ‘Now, Voyager’, one of the most successful Davis vehicles made during her triumphant years at Warner Brothers. The director was Irving Rapper. Davis and Gladys Cooper were nominated for OSCARs, the music won one.

Rains (OSCAR-nominated) and Henreid had been hugely successful, supporting Bogart and Ingrid Bergman in ‘Casablanca’(1942), and Davis and Rains had also worked together in ‘Mr Skeffington’(1944) ~ for which they were both OSCAR-nominated. So, when Rapper and the 3 stars reassembled in 1946 for a second great drama, this time with music as the centrepiece, success seemed assured. But it was not to be. The film cost a little under $3 million, but didn’t do especially well at the Box Office, and won mixed critical reviews. It therefore apparently became the first Davis movie to lose Warner Brothers money.

The screenplay was based on a French play from 1927, a much slighter, sparer production called ‘Monsieur Lamberthier’, which came to Broadway in 1928. It was filmed as ‘Jealousy’ in 1929, staged on Broadway again in 1946, as ‘Obsession’, with Basil Rathbone, and was originally envisaged then by Warner Brothers as a film for Henreid and Barbara Stanwyck. The final choice of Davis with Henreid, would have stayed as the more modest production, if Davis had been listened to. But instead, the two-hander, starring only the musical star-crossed lovers, played by Davis and Henreid, becomes a three-ring circus of noirish melodrama. The ‘other ~ older ~ man’, fêted composer Alexander Hollenius, played with malicious appetite by Claude Rains, is not only seen, but actually dominates those scenes in which he appears. Given his co-stars, this is no mean feat, but he succeeds in upstaging even Davis, whilst appearing to be barely out of third gear! There is a scene over supper in a restaurant, featuring all three stars, which may be one of my favourite scenes in any Davis film. You will know it when you see it ~ and laugh! Magnificent!

The film both looks, and particularly sounds, superb. Davis playing Beethoven was dubbed, but apparently barely needed to be. And the cello music featured is gorgeous. The story ends up as slightly hysterical and soapy melodrama, which must have caused fits in the office of those trying to police the respectability/morality-enforcing ‘Hayes Code’. It is huge fun however, with lovely music.

lawyeraauReviewed in the United Kingdom on 05 November 2002
4.0 out of 5 stars
CLAUDE RAINS STEALS THE SHOW FROM BETTE DAVIS...
This is a stylish and intriguing film about a pianist, Christine Radcliffe, who has an affair with her benefactor, the wealthy and reknowned composer, Alex Hollenius. She began this affair years after she had fled World War II Europe, leaving behind the then love of her life, cellist Karel Novak, whom she believed to have been killed in the war.
One day she discovers that Novak is stateside and playing his cello at a college concert. She goes, hoping against hope, and discovers her long lost lover, and it is as if they had never been parted. She brings him to her stylish and sophisticated home, where he sees traces of another man having been there in an intimate sort of way. He is suspicious, though Christine avows her love for him.
They decide to marry immediately, and do so, throwing a celebratory party which is the epitome of post war chic and is crashed by Alex Hellonius, the now spurned former lover. Hellonius happens to be one of Novak's favorite composers, but his somewhat outrageous behavior at the party at first puzzles Novak. Novak finally catches on that there must have been something going on between Christine and Hellonius, but Christine denies it, saying that he was merely her benefactor.
A cat and mouse game ensues between Hellonius and Christine with the emotionally fragile Novak as the unwitting the pawn. Hellonius taunts Christine under the guise of friendship and musical sponsorship of Novak. Christine suspects that Hellonius is up to no good and is worried. He taunts her, until she believes that she can no longer maintain the deception. She then resorts to a solution that will prove to be unnecessarily final.
Bette Davis is excellent in her role, but Claude Rains pulls out all the stops. How he did not get an Academy Award for his performance, I will never know. He is sensational as the egotistical, clever, and utterly brilliant composer. Paul Henreid gives a fine performance as the war scarred, sensitive cellist, but is somewhat overshadowed by his co-stars. This is a must see film for all Bette Davis fans and classic film lovers. The film will also turn the viewer into a die hard Claude Rains fan.
14 people found this helpful

Andrew HillReviewed in the United Kingdom on 23 December 2003
4.0 out of 5 stars
Outstanding Music by Korngold
This is a very interesting film for which Korngold specially wrote a cello concerto, which is performed on the film. The story is a well acted version of the familiar tale of wife leaving her husband for another man, but the Korngold Concerto is an outstanding piece of music, well worth a place in the modern concert halls.
4 people found this helpful
See all reviews
Back to top
Get to Know Us
Make Money with Us
Amazon Payment Methods
Let Us Help You
© 1996-2022, Amazon.com, Inc. or its affiliates