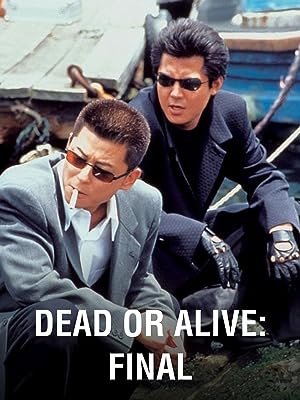 (14)
5.61 h 28 min200218+
The ace cop of a totalitarian police force and a drifting android play their parts in a post-apocalyptic society. They are destined to fight. Their encounter will change them forever.

Rowena HoseasonReviewed in the United Kingdom on 14 January 2018
4.0 out of 5 stars
Blade Runner meets Matrix (minus any budget or SFX, plus Asian sensibilities and style)
Verified purchase
Just when you think Japanese cinema can’t get any stranger… along comes the DoA trilogy. Except it’s not really a series in any conventional sense, because none of the characters or story are sustained between episodes. Any continuity comes from the two antagonists, played by the same actors, and the director. Who is plainly a bit odd.
This one’s set in an unlikely version of the year 2346 (looks a lot like 1990-something, tbh). A ‘replicant’ battle-android left over from the last wars comes to the rescue of a few rebels, who are trying to escape the control of a repressive, Big Brother-type overlord.
All of which is pretty much an excuse for some awesome, amped-up, close-quarters, unarmed combat. And a surprisingly touching love story (in between the snarling, shouting and shooting).
The special effects are terrible; the future dystopian scenario is barely credible. Fight scenes are pretty decent and the characters are… peculiarly poignant.
The finale is, as you’d hope, bizarrely surreal.
8/10

Ian ReayReviewed in the United Kingdom on 19 March 2017
5.0 out of 5 stars
Five Stars
Verified purchase
great

Jonathan James RomleyReviewed in the United Kingdom on 13 January 2008
4.0 out of 5 stars
Inventive - if not entirely successful - final to the always daring Miike Takashi-directed meta-trilogy.
The original Dead or Alive (1999) was a straight to video police/Yakuza cross-over that opened with a rock-video style montage and climaxed with a scene of jaw-dropping implausibility. It took on the clichés and characteristics of the usual police dramas that we're familiar with, but infused them with all manner of bold and brash directorial flourishes and much in the way of attention grabbing shock sequences. This second follow up - which takes the same lead actors from the first two DOA films and drops then into a whole new setting as entirely new characters (giving us a sequel in the thematic sense alone) - tones down the excessive violence and the outré spectacle even further than the preceding Dead or Alive 2: Birds (2000) - to give us an oddly uneven film that strives to tie together the various ideas of destiny, identity, karma and reincarnation, whilst simultaneously offering us a strange combination of the worlds of Ridley Scott, Wong Kar-Wai, Shinya Tsukamoto and Takashi Kitano respectively. What we have then is an increasingly odd construction - part action film, part cyber-punk pastiche - bringing to a close this always daring Miike Takashi-directed meta-trilogy, in a way that will please all fans... without necessarily blowing them away.

With these factors in mind I would definitely agree with the general online consensus - which considers this to be a step-back from the first two films, in particular the lyrical splendour of Birds (which could easily be listed as one of the best films of Miike's career thus far) - with the film in question seriously lacking that particular work's emphasis on character or indeed; the first film's kaleidoscopic disregard for logic and convention. What we have instead is a fun little film that meanders along from one cyber-punk cliché to the next, occasionally coasting on a wave of broad humour, or a particularly nice directorial flourish; such as the title of the film appearing in the background on a giant CGI gunship, or the shoot-out in the alleyway that is incredibly well choreographed. None of this really adds up to a satisfactory whole, however, with the film, for me, seeming to be far too disjointed and directionless, while the pacing, on a number of occasions, can seriously drag.

Unlike much of Miike's work, Dead or Alive: Final can be vaguely described as "science fiction"; taking place in a post apocalyptic Yokohama, where the population is kept under rigid control by a half-crazed homosexual general and his army of secret police. Riki Takeuchi (Fudoh: A New Generation) is the hard boiled chief of one such unit, locking horns with Sho Aikawa's (Gozu) mellowed out drifter, who has taken up with the gang of idealistic rebels that have kidnapped Takeuchi's son. However, in true DOA style, the plot of the film is mostly nonsensical; ripped off from a variety of other sources such as THX-1138, Blade Runner, Tetsuo: The Iron Man/Body Hammer, Terminator 2: Judgement Day and The Matrix; with the whole thing used as nothing more than a concept that links these two continually warring characters thematically as well as metaphorically. As a result, there's no real dramatic tension; though a brief "Terminator 2 like" relationship between Aikawa's replicant character, Ryô, the wife of the rebel-leader and a wandering young boy suggest hidden depths and sub-textual notions of family and humanity, they're soon quickly replaced by more action and sporadic attempts at humour.

There are still a number of things to recommend, however; chiefly, the film's visual design, which is presented in an Edward Hopper-esque colour scheme of autumn yellows, vivid greens and the occasional cool blue. There are also a couple of fairly impressive action sequences that draw more on physical combat as opposed to the gun play that we've come to expect from Miike's work and the DOA series as a whole; with the scene in which replicant Ryô has to escape from Officer Honda and his gang of armed mercenaries (whilst also protecting a young boy caught in up in the midst of the action) being an obvious jaw-dropping standout. Once again, there are fine performances from the two leads, with Takeuchi reprising his role as the sort of antagonist-like character to Aikawa lovable rouge, while the supporting characters, padded out by a largely Chinese cast and a few characters that actually speak in broken-English, help to lend a sense of credibility to Miike's largely 21st centry depiction of the far off future (recalling Jean Luc Godard's retro-futurist classic Alphaville, as well as Michael Winterbottom's subsequent Code 46).

What follows is all in good fun, moving from scenes of staggering action to more gentle moments between Ryô and his adopted family; with Miike and his scriptwriter making subtle allusions to that old sci-fi staple of the robots being more human than the humans themselves. Sadly, none of these ideas really come to anything substantial though, with the film ultimately ending up as a visually impressive slice of sci-fi hokum. Nothing here comes close to matching the level of brilliance that Miike has previously established - not only with the preceding Dead or Alive 2: Birds, but of course, with great films like Shinjuku Triad Society, Audition, Gozu, The Bird People in China and Visitor Q - but die-hard fans of the director are sure to find something to enjoy; if not the comical sparring of Takeuchi and the always enjoyable Aikawa, then certainly the rampaging sight of a gigantic Day-Glo robot with a purple penis head. Yes, you have been warned...
2 people found this helpful
See all reviews
Back to top
Get to Know Us
Make Money with Us
Amazon Payment Methods
Let Us Help You
© 1996-2022, Amazon.com, Inc. or its affiliates