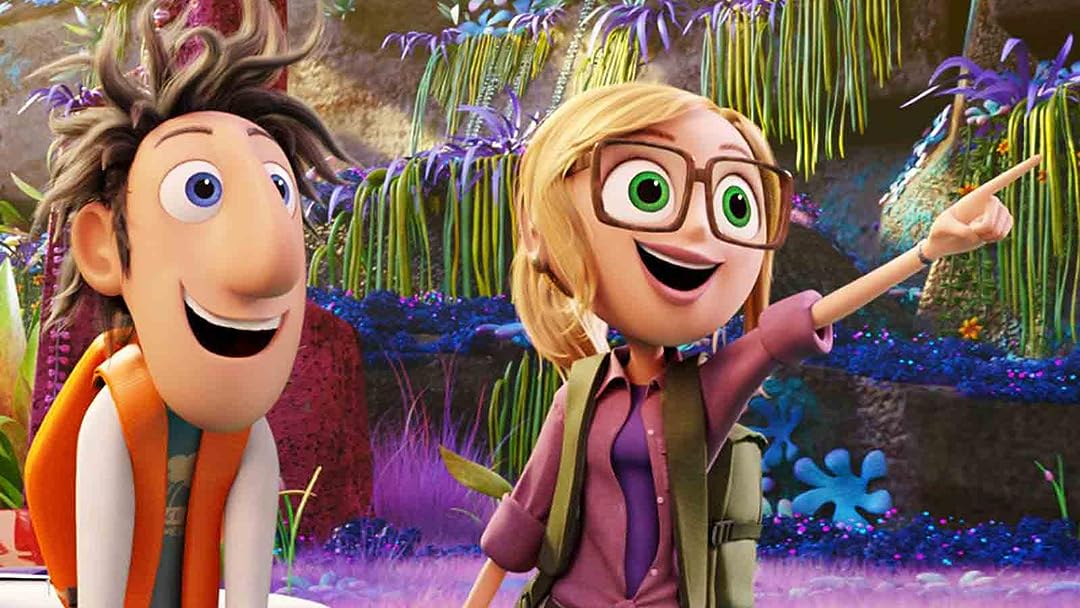 Cloudy With a Chance of Meatballs

(3,863)
6.91 h 29 min2009X-Ray
Get ready for an exciting serving of endless fun and world-wide food disaster of epic portions for the entire family!

Add a Kids profile to watch hundreds of Kids and Family titles on Prime Video.

The Movie DioramaReviewed in the United Kingdom on 26 June 2020
4.0 out of 5 stars
Cloudy With A Chance Of Meatballs deliciously makes for a three-course animated meal.
Verified purchase
Cloudy With A Chance Of Meatballs deliciously makes for a three-course animated meal. Sitting. Thinking. Noting. Researching. Motivating. Reviewing! Lettuce take the thyme to digest the cheesy grate-ness that sub-lime-ly makes time fries at an up-beet pace. Tackling two relation-chip dynamics with clumsy scientist Flint Lockwood, an un-raisin-able son wanting to become an inventor and his less than grilled father who wants him to relish in assisting at the family tackle shop, with the other being two friendly loafers whom share the same loaf for celery-brating all things science. Leaving plenty of mushroom for Flint’s latest invention, a diatonic super mutating dynamic food replicator, going bananas and dipping the townsfolk of Swallow Falls in a weathering pickle. “You have seen a meteor shower, but you have never seen a shower meatier than this”, meteorologist Sam Sparks, and main love interest, reports as juicy hamburgers descend from the sky. Flint must savour the world before it’s caked with viscous syrup. Bon appetite! Orange you glad corny food puns were used to desc-rye-be the feature’s plot? It was hard wok!

Anyway, Lord and Miller’s directorial debut, an adaptation of Barrett’s children’s book, is a colourfully inventive animation that balances its diet of fast-paced action, witty sight humour and heartfelt familial reconciliation. The screenplay on offer showcases the energetic buoyancy that cements Lord and Miller’s talent as capable screenwriters. Not all the jokes land with grace. For example the constant inclusion of “Baby” Brent, the town’s former mascot for sardines, was nothing more than dim-witted slapstick humour. Conversely, the characterisations and mannerisms of Lockwood, his sugar-addicted pet monkey Steve, Sparks, athletic officer Earl and the greedy mayor, all host a wide array of memorability to them. Whether it be participating in an ice cream snowball fight, literally obliterating all of the neighbours on a rampage, or Flint frustratingly trying to navigate his technophobic dad around a desktop to send a simple email with an attachment.

The vast majority of scenes, whilst moderately zestful as children slowly develop diabetes as they constantly digest jelly beans and chocolate cake, impact towards the central character development of Flint and the fractured relationship with his father. As unsuccessful as Flint’s inventions are, he believes he owes it to his deceased mother to pursue his lifelong ambition, forever determined to become the best of the best. His fisherman father, concerned about change and the welfare of his son, never expresses his belief. Therefore, there’s a communicative breakdown that is only emphasised by Earl’s eternal love for his son Cal. Putting aside the gigantic steaks and mustard-covered hot dogs falling from the suspiciously ominous clouds above, this story is about familial appreciation. No matter the end result. Lord and Miller consistently revert to this central theme through several scenes of sincerity. The barrage of fishing puns to accentuate that malfunction in communication between them. Transforming a relatively inevitable conclusion into a transcendental explosion of love.

Spaghetti tornados launching meatballs and a colossal avalanche of leftovers could not replace that poignant sentiment. Naturally, the food meteorology acts as an exercise in creative animation, granting the feature a personality of its own. Its style incredibly digestible, yet pleasantly tasty to glance at. Whilst the character models were somewhat simplistic in comparison, the animation remained vividly colourful and fluid throughout, with plenty of attentive detail for the backdrops. Food is constantly raining down, subconsciously forcing viewers to examine the entire frame to see what tasty item has descended onto the town.

Voice acting was appetising, with Hader and Faris commanding the cast through precise dialogue execution. Faris especially, digesting a burger and exclaiming “I love it”, challenging such method actors including Bale and Day-Lewis. In all seriousness, she was succulent. Mr. T shouting “Flint Lockwood” never fails to conjure smiles, as does Bratt’s Guatemalan committed line “he is in...a food coma”. Samberg was the rotten egg of the bunch, shouting the vast majority of his dialogue with no expression or range.

The anchoring father relationship powers the narrative, unfortunately Flint’s love interest with Sam, more often than not, overwhelms the former bond with forced development that diminishes the fragility with his father. The jelly castle distraction being an acute example of this. Removing the adoration between them would’ve centralised Lord and Miller’s direction with Flint’s father, creating a banquet rather than a main course.

Still, Cloudy With A Chance Of Meatballs digests its source material and spits out an inventive animation boasting with aesthetic originality and developed characters that will have you screaming for more ice cream. The chest hairs weren’t always tingling, but the sumptuous aftertaste was worth it, leaving you hungry for more.

pjae27Reviewed in the United Kingdom on 07 August 2022
5.0 out of 5 stars
Completely insane
Verified purchase
This is a surreal comedy for kids with an enjoyable plot and some great character. Some of the moments are totally crazy but make you laugh. We all really enjoyed it (kids 9 and 11).

south walianReviewed in the United Kingdom on 13 March 2014
5.0 out of 5 stars
gift
Verified purchase
Cloudy with a Chance of Meatballs is a 2009 American Computer animated science fiction comedy film produced by Sony Pictures Animation, distributed by Columbia Pictures, and released on September 18, 2009. The film is loosely based on the children's book of the same name by Judi and Ron Barrett.

James HardimanReviewed in the United Kingdom on 14 April 2022
1.0 out of 5 stars
Waste of time and money
Verified purchase
Ridiculous movie. That's a couple of hours I won't get back. My 7-year-old grandson didn't hate it quite as much as I did.

Amazon CustomerReviewed in the United Kingdom on 14 June 2021
5.0 out of 5 stars
Great film, shame it’s another chargeable Prime video!
Verified purchase
Great film to watch as a family, for anyone who feels a bit different or has science geeky vibes this is fabulous! Also touches on parent child relationships and is very funny! Watched the second one at the cinema and have only just watched the original.
Just a shame films of this age are chargeable to Prime members, ridiculously low level of free family films to choose from and why I’m using other platforms more and more.

Steve FarrellReviewed in the United Kingdom on 25 July 2019
5.0 out of 5 stars
Its a good movie
Verified purchase
When ordering this movie I was under the impression that I was getting the second Cloudy With A Chance Of MeatBalls film too but it turns out this package only has the first film but in DVD and Blu Ray form so I was a bit dissapointed. Otherwise its a fun film to watch.

wood pigeonReviewed in the United Kingdom on 12 July 2014
3.0 out of 5 stars
Ok
Verified purchase
I bought this on the strength of some people mentioning that this was a great film. I am not that keen on it to be honest. The storyline is ok, and the characters are ok, but that's all I found this film to be - just an ok film. Nothing to really write home about. It couldn't grab my attention for more than a minute. I found I kept getting up to do stuff. If you're undecided about this film, then in my opinion; give it a pass, go buy Frankenweenie instead.
One person found this helpful

MattReviewed in the United Kingdom on 21 October 2014
4.0 out of 5 stars
Good family fun
Verified purchase
This is a good solid childrens animated film. The central idea is silly enough to appeal to kids and give a strong visual element to the film, this means that it can be imaginative and plenty of fun.
There are enough jokes and visual laughs to keep everyone engaged, and i admit that i found myself liking the film more than i thought i was going to.
This is definately a film i would recommend for Sunday afternoon family viewing.
One person found this helpful
See all reviews
Back to top
Get to Know Us
Make Money with Us
Amazon Payment Methods
Let Us Help You
© 1996-2022, Amazon.com, Inc. or its affiliates