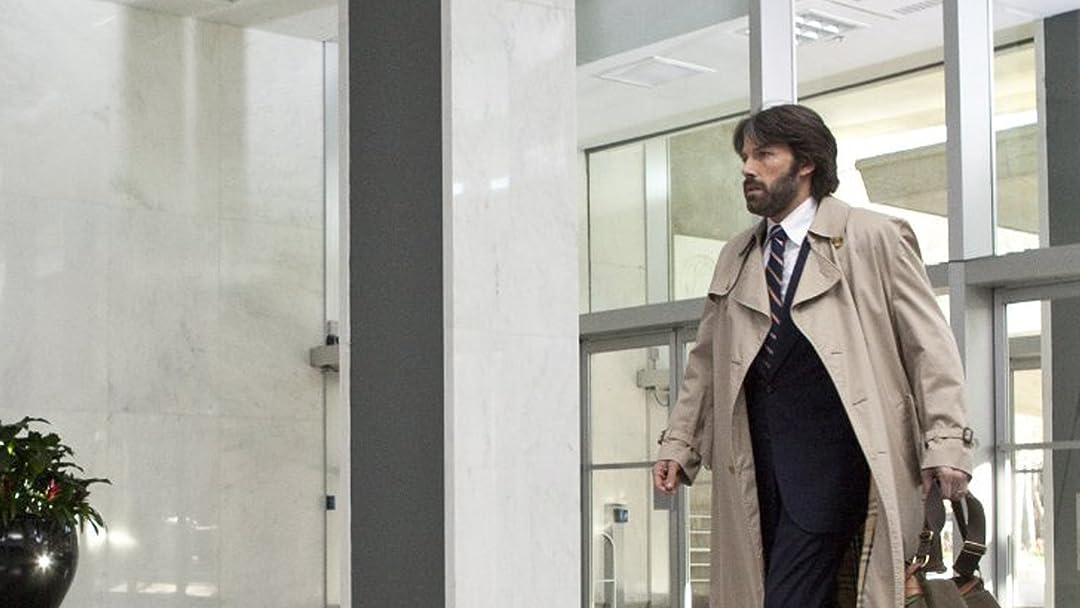 (3,573)
2h2012X-Ray
Ben Affleck directs and stars in this Academy Award-winning political thriller based on real events that took place during the 1979 Iran hostage crisis. In November 1979, the American embassy in Tehran is stormed by militants and 52 Americans are taken hostage. In the midst of the chaos, six Americans manage to escape and find refuge in the home of the Canadian ambassador.

Watch for £0.00 with a Prime membership

The ancient mariner.Reviewed in the United Kingdom on 15 April 2019
4.0 out of 5 stars
Historically inaccurate.
Verified purchase
As a drama this works very well but once again the American habit of downplaying the assistance given by allies, lets it down. The British and New Zealand embassies did not refuse to help. Far from it.
17 people found this helpful

Ben Affleck plays Tony Mendez, a CIA agent who is sent into Iran in 1980 to free 6 US diplomats, who, their own embassy having been overrun by revolutionaries, have escaped and been given temporary asylum at the Canadian Embassy in Tehran.

Before departing for Iran to carry out the rescue, Mendez must come up with a cover for himself and the six diplomats. It is decided that they are to play a scouting party looking for film locations for a sci-fi adventure film called Argo, hence the title of this film. As Mendez admits to his bosses, although his idea is a bad idea, it is still the best of a bad lot. And so, the rescue gets under way………

This film is by the numbers, employing many of the usual devices to stall the escapers and maintain the tension to keep the viewer hooked. While these devices were predictable (if you have seen enough thrillers of this type, that is) I still enjoyed the film. I have not seen many Ben Affleck films, but in those I have seen he plays quiet, serious men who rarely smile, as he does here. At the beginning of the film this worked particularly well when contrasted with the larger-than-life characters played by John Goodman and Alan Arkin. Some of the earlier scenes were really quite humorous.

However, as well as enjoying the humour in these scenes, I also got the strong sense that Goodman and Arkin are “old school” actors. By that I mean that they are much better actors than their younger colleague, Affleck. This did not surprise me. Acting, if you view it as a form of communication, is, like literacy/articulacy levels generally, going downhill. This was brought home to me about 10 years ago when I was watching an awards ceremony on tv.

The nominations were being read out by younger actors, maybe in their late 20s and 30s. They mumbled, they laughed a lot, and generally one could not make out much of what they were saying. Their attention was not on delivering lines to their audience, not on communicating with their audience as it ought to have been. Their attention was on themselves instead. In marked contrast, however, when actor Christopher Lee was awarded a major prize (a lifetime’s achievement award, I think) and he gave his acceptance speech, his delivery was “old school”. His diction, his voice projection, his ability to deliver his lines clearly and audibly, was superb. He held the stage. In other words, he was a better actor because he had been trained in the days before actor training had also gone downhill. For similar reasons, Affleck does not have the same on-screen presence as the older actors.

(Unfortunately, the general incoherence of presenters, especially radio presenters, is becoming standard. The voice of the presenter may go up and down in volume, for example, such that one only hears the first part of what they are saying before they drop their voice to the level of a whisper.)

As well as illustrating different standards in acting, the film did raise one of two questions. At the very beginning of the film, we see the US Embassy in Tehran surrounded by an angry mob of revolutionaries carrying banners. Inside, the diplomats are destroying as many sensitive documents and smashing as many computers and communications equipment as they can. I do not know if this really happened, but finally one of the diplomats decides, in his panic, to go outside and try to “reason” with the mob. Was one of the diplomats really so stupid as to think he could reason with an angry, hostile mob? Anyone with any sense would have known that the mob was beyond reason. And, thanks to this diplomat, it inevitably took the opportunity handed to it on a plate to invade the embassy and capture its staff. Did someone really open the door to the baying mob or is this sloppy screenwriting?

At the end of the film, much is made of the "cooperation" between Canada and the US in organising the escape. Cooperation? That is propaganda. My response to that nonsense is that if nations cooperated in the first place, then there would not have been a revolution in Iran and there would have been no need to mount a dangerous rescue mission. In short, if nations cooperated instead of competing with each other, then the world would be a peaceful place. Some of these films really do spout the most awful tripe.

That said, why did Canada shelter the US diplomats, and at considerable risk to its own diplomatic staff? Far from being “cooperative”, perhaps Canada had decided that snubbing its bigger, much more powerful North American neighbour would not have been in its best interests. In other words, Canada, for fear of repercussions, deemed it necessary to keep the US sweet by aiding its escapees.

Sentimental tripe and bad judgement on behalf of the diplomat notwithstanding, I enjoyed this film and will give it 5 stars.

One person found this helpful

L.A.JohnsonReviewed in the United Kingdom on 05 September 2021
3.0 out of 5 stars
Great film but inacurate and unfair account
Verified purchase
A great film as such, with some fabulous dialogue and one liners. It's just not very accurate, and that's a shame, as it claims to recount an important part of history. Notably, it downplays or even negates the considerable support the Americans received from the Canadians, British and other allies, who went out of their way to provide alternate exit routes should it come to that. The film of course also overcooks American heroism, and the adversaries are mostly reduced to a dumb, aggressive, shouting mob.
Reality is more complicated than that. And way more interesting!
One person found this helpful

BeelineReviewed in the United Kingdom on 20 December 2020
5.0 out of 5 stars
Argo... try watch it yourself
Verified purchase
We decided to improve the level of movie standard we were watching. We sought refuge in the (debatable) safety of the Oscar Best Picture category. We loved the drawn out tension in this film. As a child of the 70’s I somehow missed this historical event at the turn of the decade from my primary school point of view of the world. So the plot filled in a historical hole and explained much of the misremembered early 80’s news stories that I must have experienced but not understood at the time. I’m not sure of the historical accuracy and Hollywood gloss but images from the film presented alongside the ‘real’ photojournalist ones infer absolute integrity to the facts.
The tension built in the 2hr or so is truly impressive and I will certainly continue my journey along the Oscar Best Picture shelf...
One person found this helpful

Alastair RosieReviewed in the United Kingdom on 05 May 2021
3.0 out of 5 stars
It's oaky
Verified purchase
I remember the Iran hostage crisis well, it was always in the papers but I think this movie tends to lean towards a Hollywoodised version of events. There was a lot more going on behind the scenes at the time that we only found out years later. Having said that it's probably a good starting point for people who want to read more about Iranian history in the modern era, going back to the 1950s when the CIA, acting on the behalf of the British government, intervened. In a sense the Iran hostage crisis was a classic example of unexpected blowback.

fastforwardfanReviewed in the United Kingdom on 05 August 2015
3.0 out of 5 stars
Not what I expected
Verified purchase
This was an interesting story about the American hostage crisis in Tehran in 1979. Iranian students invaded the embassy holding 52 hostages for over a year, but six diplomats escaped before the takeover. The film is mainly concerned with their extraction from Iran by CIA agent Tony Mendez, played by an expressionless Ben Affleck, and was known at the time as the ‘Canadian Caper’.

It has been acknowledged, including by Jimmy Carter, that the film is fictionalized and only ‘loosely’ based on the real events. I wouldn’t normally have a problem with this in other films, but why is the Canadian’s involvement largely written out? Also in the film they say that the British embassy turned away the six diplomats, whereas in fact they did stay there for a while until it was unsafe, and then went to the Canadian embassy. No wonder it won three Oscars when you can make the Americans involvement look heroic and everyone else a bit useless.

What could have been a really exciting fact based account of the incident has been turned into a US comic book story. I do hope Mr Affleck doesn’t make any other ‘historical’ films, as some will take this film as fact.
7 people found this helpful

BrunelReviewed in the United Kingdom on 17 September 2016
4.0 out of 5 stars
Highly Recommended (PS its not true)
Verified purchase
As 2 hours of entertainment - this is outstanding. It has high drama, almost unbearable tension, some sparkling dialogue and lovely humour. Affleck has done a great job as an actor and director. Late 70s USA and I suspect Iran are shown so well its as if someone had found a time machine. Alan Arkin and John Goodman are great as two cynical but clever Hollywood operators given the chance to do some good.
It should be 5 stars, but a point has to be knocked off for the usual shameful riding roughshod over the real facts, which wouldn't appear to add to the story greatly but do make the US look better. Yes its based on a true story but as with all these films it takes itself very seriously and is happy for people to take it as fact (which many people do of course) If you can stomach or ignore this - then its highly recommended.
7 people found this helpful

Audio ProReviewed in the United Kingdom on 14 October 2021
5.0 out of 5 stars
Keeps You On The Edge of Your Seat!!
Verified purchase
Whether a film is based on true facts or is a true story, most of the time they are enjoyable to watch and this was no exception!! All the way through I kept willing Ben Affleck and the six that escaped the embassy to be safe and escape, but you don't know until close to the end of the film whether or not they will make it.

Highly recommended if you like a thriller!!
See all reviews
Back to top
Get to Know Us
Make Money with Us
Amazon Payment Methods
Let Us Help You
© 1996-2022, Amazon.com, Inc. or its affiliates