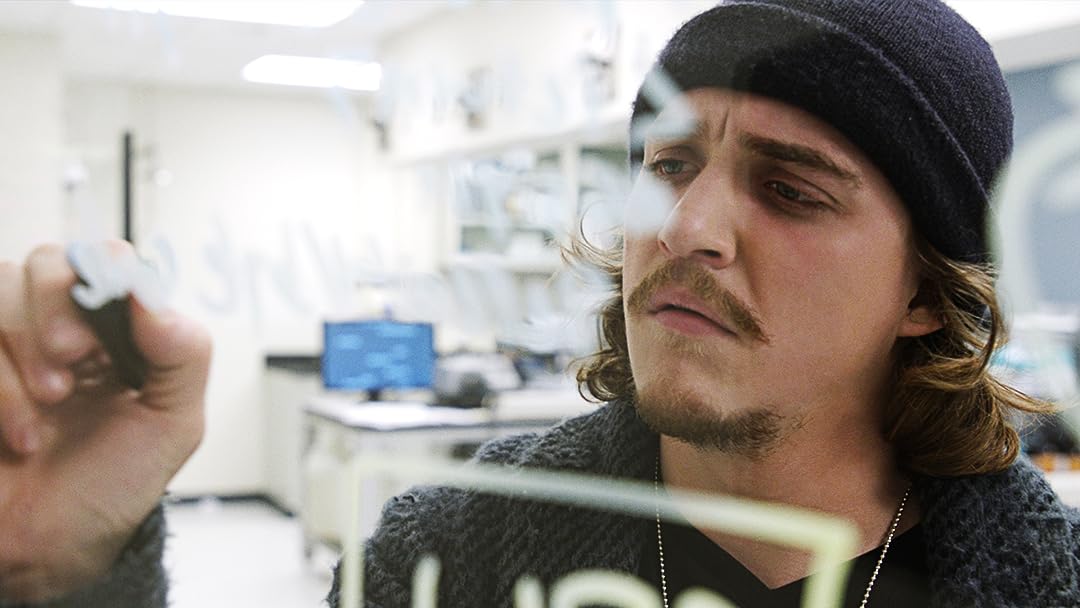 (219)
5.71 h 41 min2018X-Ray
After deciphering a message found in a satellite, genius cryptographer Alex Jacobs finds himself being stalked by government agents and otherworldly beings.

VicuñaReviewed in the United Kingdom on 21 December 2020
5.0 out of 5 stars
Very clever take on the concept of time
Verified purchase
This is a genuinely clever film. It’s not action packed and neither is it filled with special effects, but it explores a fascinating quantum theory concept. It looks at time in relation to space; the TARDIS aspect. Assuming time is non linear, is it possible to have different time frames co existin at the same moment? Parallel universe style.

Once you get your head round that and the way in which this Avenue is explored, the film is highly watchable and quite thought provoking. The lead character’s diction and dialogue is a little trying at times and he doesn’t have much by way of back story, but he’s the delivery vehicle for a complex idea. Loved it.

DottoreReviewed in the United Kingdom on 16 January 2021
4.0 out of 5 stars
A 4.5 STAR FILM WORTH A WATCH! SCHRÖDINGER’S CAT PERSONIFIED!
Verified purchase
PROS:

This is a very good film as long as you prefer content and thought provoking to the usual mindless violence and explosions associated with science fiction films. I’ve turned away from mainstream Hollywood films for the past 7 or 8 years. Most US made films are full of needless gun violence, devastation and explosions with no research based events (e.g. running away from a 10kg bomb explosion). I’ve started finding films which have more substance and better production values and these sorts of films are generally served up by “world cinema’. So it was a great, and pleasant surprise to find a US produced film that really gets you thinking.

This film is based around how we perceive time. That’s all I will say for fear of ruining your watching enjoyment. Ignore the low scores. These are from people, with the greatest respect, prefer to have everything explained, a linear plot and masses of explosions, car chases and gun fights. I don’t mind those things if they’re in the context of the film. However, this film leaves a lot more to the imagination, probably to do with its relatively low budget. If you are aware of Schrödinger’s cat, the film will resonate with you.

The main character, Alex, is believable and over time gains your sympathy. The main female character, Rebecca, is much less likeable and that is the intention of the scriptwriter. There are a few detail errors, borne out of the usual lack of research or general knowledge. The main one for me is the fact that the scriptwriter, producer or whomever doesn’t know that if your mobile phone is connected to the cellular network, i.e. it has signal, your exact position can be triangulated. This is because at any one time your phone is being pinged by at least 3 mobile cells. The strength of the response determines your distance from the cells. Thus the only way to avoid being located is to remove your battery from your phone completely. Of course, most smartphones have built-in batteries, so bad luck on that. Leaving your phone on in your house when you go out is the best way! Additionally, most cars, certainly German ones for the last 10-15 years have in built GPS, so bad luck on that too! It’s a minor gripe, but when you bother to make a film based on quantum theory, it’s not that hard to realise the provable rather than realise the difficult to prove. One other thing: if there’s a secret facility, any access points are going to be covered with alarms and CCTV.

Don’t let those gripes put you off, though. The film really is worth a watch and don’t worry about the lack of special effects. The effects they produce are low rent, but they signify events and your imagination will fill the rest in. All in all, I highly recommend this film. WATCH IT, IT’S DOTTORE APPROVED!

(OTHER FILMS I’D RECOMMEND AVAILABLE ON AMAZON PRIME, IN NO PARTICULAR ORDER:
FOUR LIONS, WISH YOU WERE HERE, PINCH, SALYUT 7, MAGPIE, FURIOUS, THE MAJOR, AND HAVE A LOOK THROUGH MY PREVIOUS REVIEWS OF FILMS).

Joanna HeatonReviewed in the United Kingdom on 13 February 2019
2.0 out of 5 stars
Could have been a great film.
Verified purchase
I've only rated this 2 stars because I was disappointed with this film. The trailer portrays the film's best bits which unfortunately are in the first 20-30 minutes of this film then the rest I'm afraid is flat. It's as if they couldn't be bothered with the ending and so decided on anything just to get the film finished. I'm sorry, but this film had lots of potential and I was really hoping it was going to be as good as the trailer, but unfortunately it went flat.
8 people found this helpful

sihReviewed in the United Kingdom on 17 January 2021
5.0 out of 5 stars
It's a really good Sci-Fi Time / Quantum Theory type movei
Verified purchase
I read some reviews here before watching this and nearly didn't watch it. I'm glad I ignored the reviews and watched it. It was a great movie start to finish, especially so if you like thinking about time travel and dimensions. The acting was good, as was the dialogue and I could hear it all clearly (some reviewers say they were mumbling which I hate, but they weren't). Go for it.
5 people found this helpful

Pankósmios (παγκόσμιος)Reviewed in the United Kingdom on 09 September 2018
2.0 out of 5 stars
Great concept but ...
Verified purchase
This movie is based on an excellent idea and the first hour is interesting and quite absorbing, however the lack of budget in terms of writers, special effects and editing are made obvious with the movie inching forwards painfully slowly. What is needed is a big budget and an intelligent script, written for an audience who can think for themselves but who appreciate a well made, adequately funded sci-fi film. The direction itself isn't too bad, the fil is just incredibly wordy, where the characters say instead of do and ideas are over-explained instead of demonstrated. All in all, a worthy concept and a potentially amazing movie in competent hands.
5 people found this helpful

JAMMReviewed in the United Kingdom on 21 December 2020
1.0 out of 5 stars
yawn
Verified purchase
I think a new movie needs to grab the audience in the first 5 minutes and this failed to do that,

aliens are fantasy , far fetched what ifs , so a bit of suspense would help.

I get the reviews , but I don't have time to wait for the lead actor to convince me , sorry but I couldn't understand his mumbling in the opening scene .

there you go , I'm an old school movie fan & a movie is a movie . ! entertainment ?
2 people found this helpful

MagicgeniegirlReviewed in the United Kingdom on 20 September 2021
5.0 out of 5 stars
Worth it.
Verified purchase
Requires a good grasp of quantum physics to really appreciate the concepts being addressed in this interesting film. It took some time for me to be sold on it, but I kept watching it because the main character intrigued me. I'm glad I stuck it out because the last 20 minutes skyrocketed this film from 3 to 5 stars. Extremely satisfying to the hard sci-fi geek in me who loves to think about these things. Lots to mull over, and then some. Watch it if you like to think, don't if you don't.
One person found this helpful

sammieReviewed in the United Kingdom on 30 January 2021
4.0 out of 5 stars
very scary
Verified purchase
i didn't realise it would be a horror movie
i mean horror might be strong
but it follows a similar premise to the scary "shadow men" conspiracy theories I've read in the past...
perhaps that's what made this movie scary for me...
i mean the code cracking part as always was terrible
(3 lines of import from library essentially) but such is life with such movies
and sure the usual other technical gripes...
but i was glad i watched until the end!
that way, its less scary than if i had stopped half way through.
See all reviews
Back to top
Get to Know Us
Make Money with Us
Amazon Payment Methods
Let Us Help You
© 1996-2022, Amazon.com, Inc. or its affiliates