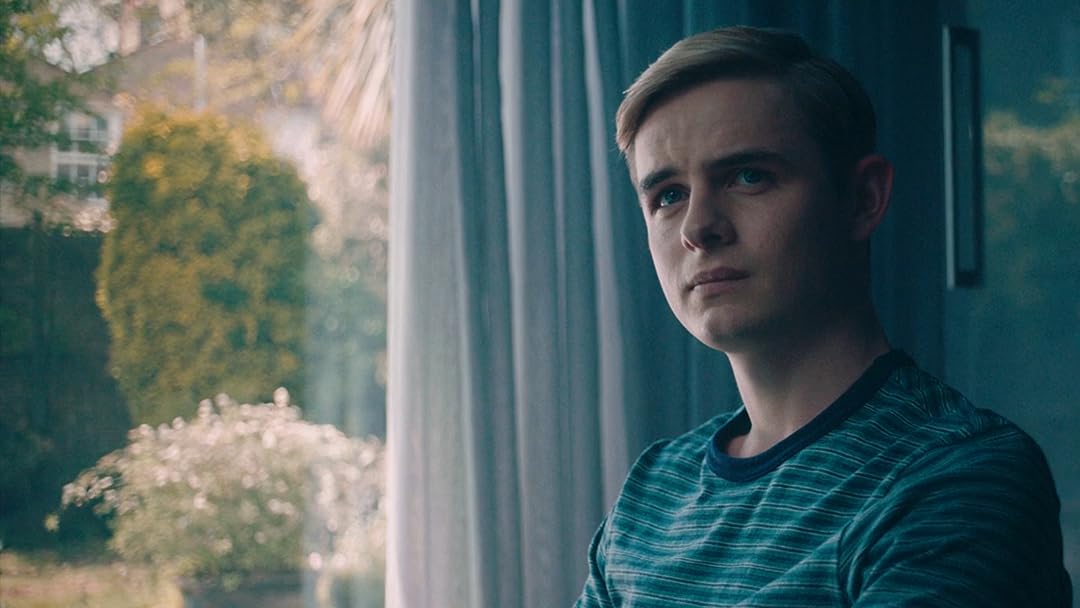 Season 1
(824)
2020X-RayHDR
Alex Rider is a London based teenager who has unknowingly been trained since childhood for the dangerous world of espionage. Pressured to help investigate his uncle's death, and how it connects to the assassination of two high-profile billionaires, Alex reluctantly assumes a new identity and goes undercover in a remote boarding school called Point Blanc. Isolated far above the snowline in the F..

Charlie MurrayReviewed in the United Kingdom on 05 June 2020
5.0 out of 5 stars
A Near Perfect Adaptation of Point Blanc (Alex Rider Series 1)
The show is more a 4.5 rather than a full 5 just to start with.

After the pretty abysmal movie a decade and a half ago (I rewatched it last year and... Yeah it's very cheesy and over the top), a TV series has been made, though starting from scratch with Point Blanc instead of Stormbreaker (I'm told it's due to licensing issues with those who made the Stormbreaker film). I was a little worried about the show, but also very excited. The movie was awful, and while I enjoyed the books to death as a kid, reading them as an adult, you can tell they were made for kids and nothing else. So part of me wondered exactly how this would be adapted for a TV show. Initially I thought maybe 1 book every few episodes, but somehow they managed to successfully turn a 200 page book into an 8 episode series. In my personal opinion, the show is more for young adults and people my age (27) who grew up with the books. The series is way, WAYYYY more serious than the movie and can actually be pretty dark. That's not to say it doesn't have charm, there are a couple scenes in the series I laughed. But this is the Spy business, it's not meant to be all fun and games.

If you've read the book, you pretty much know how the series will play out, with some obvious differences and way more fleshed out characters, but the main structure is the same. It's definitely more modernised and they use today's technology well. For example in the Stormbreaker book, Alex finds Ian's car being towed away, but in the first episode of the series (a VERY MILD SPOILER but it is the first episode), he uses the Find My Phone app, which is actually really clever thinking. The series does it a lot where it gives you a chekhovs gun scenario and then fires it within a few episodes, and it does this very well. The series does tie up many loose ends by the final episode but it does leave it open to a series 2, which I thoroughly hope happens. I have been following the production of the series for a while and actually wondered if it would ever be aired, so hearing it was going to be on Amazon Prime put my mind, somewhat, at ease.

As for some of the characters, each role is filled out pretty perfectly (with a couple exceptions), and even takes some characters from the Stormbreaker book and places them in this series instead. Alex, for example, is... kind of perfect. He has charm, he's not overly cocky, he's not a Mary Sue all the time (even if he has been trained by his uncle in many things). It's honestly weird because he actually looks like how I imagined him in the books, so he's very much the perfect fit. There's a few differences from the books, for example Alex's school crush isn't "Sabina" it's a girl named "Ayisha". He also has a best friend, Tom, a character who is actually from later books in the series brought into the show now, who still plays a role in the series even with Alex in France. The antagonists, Eva and Dr. Greif are pretty damn good villains and somewhat intimidating. You also have Alan Blunt, Mrs. Jones and Smithers all played very professionally and stern, as they should be. Alex also has a housekeeper, Jack, who... isn't as fun as I imagined I must admit. The actress kind of just sounds bored to play her? It's kind of weird. Finally, we have the main man... Yassen! The film Yassen was..... Okay, but a bit of a douche. This Yassen is... Careful. Calm. Collected. He knows his next move before he takes his current move, and it's badass.

Overall the series is pretty great. It has it's slow moments, and there are some scenes the lighting is too damn dark to see. For a series that only had Amazon Prime as it's publisher after it had been filmed and edited, they did a pretty fantastic job making the series. Finally, one of my favourite book series gets the treatment it deserves.

YA Book ReaderReviewed in the United Kingdom on 04 June 2020
5.0 out of 5 stars
Great series, Eagerly awaiting Season two.
I loved this, I have always been a fan of the Alex Rider and Jason Steed series.
The TV series has kept the action going with Alex Rider our teen spy. I think Alex Pettyfer who played Alex Rider in the 2006 film Alex Rider was a better Alex as he was actually 14. This actor Otto is about 20 I think.
Looking forward to more, I hope they do a season two and also do the Jason Steed series.
The TV series was little different to the book, Alex spends more time at school with Tom, it made a good build up and let us into the characters lives more. Would highly recommend it. Eagerly awaiting Season two.
67 people found this helpful

AHReviewed in the United Kingdom on 04 June 2020
5.0 out of 5 stars
An improvement over the film while being a successful modern adaption of the books
As a kid I read the books and thought they were ok, the film I wasn’t a fan of because it just seemed to run too fast and skip loads of character development. This show, however, was amazing, I love how it was made differently from the books with changing the characters age to be a bit older since teen spy is a little boring to me these days and it allowed the show to be more gritty than the books, it even provided plenty of background for each character while still leaving room for them to develop further. Of course, I missed some of the gadgets from the book like the exploding ear stud and the Sony buzz saw but let's be honest if that stuff was included it would feel so outdated (minus the ear stud) like when Alex was given an MP3 player in this series I mean sure it made sense later on but it just seemed weird until then, I mean what rich teenager has an MP3 player in 2020? To sum up, this show was amazing and I will be recommending it to my friends and I hope that should it be renewed for a second season that they maybe try to add in new gadget ideas that fit the times and age of the character.
61 people found this helpful

EthanReviewed in the United Kingdom on 04 June 2020
5.0 out of 5 stars
Great series i hope we get to see season 2 and more.
Its genuinely so good, it follows the book so well that it reminded me of reading the actual books.

Its got some really funny comedic moments, (but it might be my British humour that makes it 10 times better )

The action and "SPY" aspect is really good and not over dramatic which makes it actually feel really realistic which is nice considering its all based off of a fictional book.

Its really nice to see how the 8 episodes covers 1 book , which means it opens the series to cover every book as 8 parts per book which would be really nice if they decide to continue the series further (which i think would be so worth it) .

From my perspective of reading all the books (multiple times) I am seeing things within the first book/season that i can link to the books close to the end of the series and it just makes me think and speculate on how they could turn this in to a really good TV series and it could be so popular.

So in conclusion Its a must watch if you have access to it and i think it could go really really far if it picks up the traction that i think it deserves , the cast has been picked perfectly and i think its hit all the right spots that a fan of the series would want to be hit.
53 people found this helpful

Will LReviewed in the United Kingdom on 04 June 2020
5.0 out of 5 stars
A great adaptation for those who grew up with the books and new fans.
I had been waiting on the release of this series since the first trailer was released. It skips to the second book in the series for the plot but injects elements of world-building from the first book. I thought this a good idea due to the poor film adaptation of book 1.
The series is shot beautifully which is reminiscent of a Bourne or new era bond film.
Alex as a character is ideal, he is still certainly a schoolboy and yet you believe that he could be completing the feats in the series e.g snowboarding well, fighting, parkour etc...
Faithful in the key elements but modernized for 2020 and a more mature audience.
A Y/A novel adaptation done well... alas we cannot say the same for Percy Jackson and I fear Disneys upcoming Artemis Fowl on June 12th.
39 people found this helpful

Amazon CustomerReviewed in the United Kingdom on 04 June 2020
1.0 out of 5 stars
When I say unwatchable I really do mean unwatchable
Having read the books which I did enjoy, I moved on to the car crash of a film, so when I saw there was a series I decided to watch it. Going into the first episode with already a very low bar set by the film I thought it had to be better, and boy were my hopes shattered I made it halfway through the second episode before I had to stop watching. I cant comment on the rest of the season but I couldn't bare going through the pain.
33 people found this helpful

ObiReviewed in the United Kingdom on 10 January 2022
5.0 out of 5 stars
Great show
Verified purchase
Loved it great show, read most of the books too ! Well acted

DJS ReviewerReviewed in the United Kingdom on 22 October 2021
5.0 out of 5 stars
Very impressed and glad it is a uk series
Verified purchase
A must watch for spy buffs
See all reviews
Back to top
Get to Know Us
Make Money with Us
Amazon Payment Methods
Let Us Help You
© 1996-2022, Amazon.com, Inc. or its affiliates